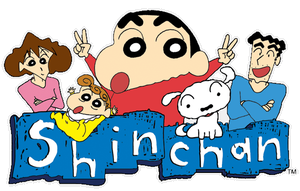 Crayon Shin-chan, or Shin-chan, is a long-running Slice of Life Japanese manga and anime series created by Yoshito Usui. It follows the misadventures of the mischievous little boy Shinnosuke "Shin" Nohara who gets into various antics with his family and friends.