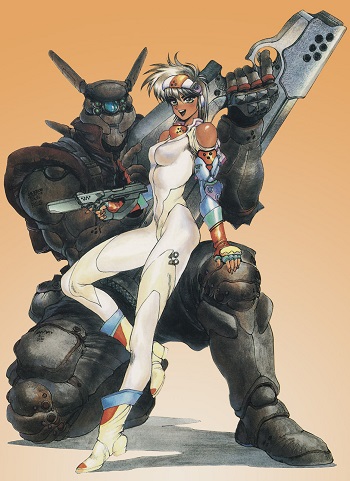 Appleseed is a four volume Cyberpunk/Mecha manga written between 1985 and 1989 by Shirow Masamune, of Ghost in the Shell fame. It led to OVA and feature film adaptations. Set in post-apocalyptic 22nd century, the story follows the Action Girl Deunan Knute and her cyborg partner and lover Briareos Hecatonchires. The two join the special forces of the city of Olympus, an enclave of peaceful life on the planet, after its devastation by World War V note The English version of the first volume's summary claims that the war that devestated the world was World War III, something that isn't explicitly stated in the manga itself, and which is clarified in Appleseed ID to be called World War V., whose population consists equally of both normal humans and "bioroids", Artificial Humans with genetically suppressed aggressiveness who act as emotional buffer for the former.