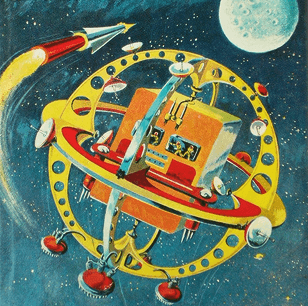 Tom Swift Jr. in The Race to the Moon.
Our bet's on the rocket though.
"The future was a chrome-trimmed triangular window in the front of dad's car, and it had its own knob to open it up. The future was a hamburger under a light fixture that looked like an atom. The future was going to be awesome."
— James Lileks, The Bleat, October 31, 2008

Raygun Gothic is a ubiquitous aesthetic of early- and mid-20th century Science Fiction, roughly from Metropolis to Star Trek: The Original Series. Raygun Gothic architecture is modeled after Art Deco, Streamline Moderne, and/or Populuxe (aka Googie). Everything is slick and streamlined, with geometric shapes and clean parallel lines constructed of shiny metal and glass, lit prominently by neon. Sweeping curves, parabolas, and acute angles are used to suggest movement — movement into The Future.

And of course, futuristic fancy-pants technology of the future is ubiquitous. Ray Guns, jet packs, flying cars, Video Phones, Space Clothes, atomic-powered everything, cigar-shaped Retro Rockets and other Shiny-Looking Spaceships, and "electronic brains" capable of calculating complex equations in mere minutes, all decorated with little blinking lights that don't really serve any purpose (but they sure look futuristic!).

This is the bright, optimistic vision of The Future that, until sometime in the mid-1960s, the Western world believed was just around the corner. Our failure to make these dreams a reality means that works featuring Raygun Gothic are highly prone to Zeerust. Retro-Futurism is a Genre Throwback to this vision. Stick "Atomic Power" logos on everything, (as well as perhaps slide the scale a bit to the "cynical" side) and you've got Atom Punk.

The Mad Scientist Laboratory and Spaceship are among the most commonly used locations in a Raygun Gothic setting. The most commonly used monsters tend to be nuclear mutants and aliens in general, although friendly aliens are just as likely to appear, either as the heroes or as characters for the cast to meet.

The only thing that could possibly look more futuristic is Crystal Spires and Togas. See also Zeerust, Weird Science, and Retro Rocket. Contrast with Diesel Punk, Used Future, Cassette Futurism and Everything Is an iPod in the Future.

Now of course, while it's true that Technology Marches On, it's also true that the Aesthetics Of Technology will always be basically arbitrary. These days, Everything Is an iPod in the Future because that's the current popular design aesthetic. It will certainly change in time, and who's to say that Art Deco might not come back into fashion one day? Look at the nostalgic design of cars like the Mini-Cooper.

In 1959, millionaire-industrialist Andrew Monday founds the city of Punchbowl, Pennsylvania; advertised as having "entered the 21st century fifty years ahead of schedule".

In 1959, millionaire-industrialist Andrew Monday founds the city of Punchbowl, Pennsylvania; advertised as having "entered the 21st century fifty years ahead of schedule".