Grammar Correction Gag
aka: You Make Me Sic 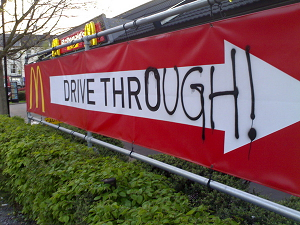 Dat'l lern 'umm!
"I see that you have made three spelling mistakes."
— Marquis de Favras (commenting on his own death warrant)
Advertisement:

A gag where a character corrects another's spelling or grammar in a context where you wouldn't usually expect it. A common setup is when a note (either of love or insult) is sent to someone, only to have it come back with all the spelling mistakes highlighted, or for extra hubris, notes like "See me" as if from a teacher, as this is the inevitable result whenever a student attempts to write a love note to their teacher.

This is also a common tactic used by butlers and upscale servicefolk to distract a hysterical guest.

On the flipside of showing intelligence, this trope can also be used to show that someone is Comically Missing the Point. Also, fairly often, the "grammatical error" will be more of a point of style that's not actually considered incorrect grammar by anyone but pedants (such as that prepositions are bad things to end sentences with.note This is the sort of nonsense up with which we will not put!) — writers who really want to Show Their Work may have the corrected party reply to that effect.

Less often, the "error" might actually be technically correct, but this will only be known to really hardcore grammarians.note For example, "that'll learn 'em" actually comes from an archaic meaning of the verb "to learn" which means "to teach".

Do this on a forum, and the comeback is likely to be "Grammar Nazi". Or "grammer nazee", as the case may be. Or perhaps, "Grammar Gestapo", if you will. Responding that you were correcting their spelling and not their grammar is just asking for it.

Compare You Keep Using That Word, when the nitpicking is over word choice instead of grammar/spelling, and Rouge Angles of Satin, caused by ignorant or hasty typing resulting in using the wrong word. Related to Do Wrong, Right.

Though that last line is also quite a sly pun, particularly in the context of the song.

Later in the same episode, Cleveland refers to "that time I helped that homeless person." Cut to Cleveland correcting the spelling on a homeless man's cardboard sign.

Beaver trolls Bear by making him think she's just correcting his grammar when he asks to try a tasty treat.

Alternative Title(s): You Make Me Sic

Beaver trolls Bear by making him think she's just correcting his grammar when he asks to try a tasty treat.