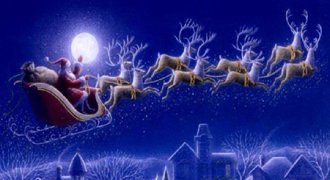 The best-known (at least in modern times) mascot of Christmas, developed in the United States as an amalgam of the story of St. Nicholas of Myra and various other seasonal folk heroes, with many aspects provided by the classic poem A Visit From St. Nicholas (popularly known by its first line, 'Twas the Night Before Christmas).

The Santa Claus myth is based largely on the Dutch holiday of Sinterklaas (a hastily pronounced Sint-Nicolaas or "St. Nicholas", who comes down the chimney on the 5th/6th of December) and the imagery of the Saint in question carried over to his North Pole incarnation. In the original stories, Sinterklaas was accompanied by black slaves; these have become demons (The Krampus) in German-speaking culture, and friendly elves in the USA. In the Netherlands, the black companions are nowadays portrayed as St. Nicholas' friends and employees. Note that in several countries in Europe, Sinterklaas and Santa Claus are now considered two entirely different characters, each with their own elaborate holiday. The habit of distributing gifts attributed to all these characters is ultimately derived from a legend about St. Nicholas, according to which he secretly threw gold into the house of a poor man by night, so the man would not sell his daughters into prostitution.

Santa Claus is universally envisioned as a festively overweight, old man with a long white or silver beard, who wears a red suit with white trim and a matching cap (originally a red bishop's robe and camauro

), black boots and a vast black belt worn across his belly. He lives at the North Pole (or in Lapland, or in Spain, or somewhere else depending on your culture — the original St. Nick was Greek, from a city in what is now Turkey) and oversees a large workshop staffed by elves (diminutive commercial-friendly elves, not tall proud Tolkien-type elves — D&D players will see more of a resemblance to gnomes) who are often far older than they look. These elves in their workshop produce toys year-round, and every Christmas Eve they load them into an improbably roomy sack which Santa carries as he sets out to deliver them to all the good boys and girls of the world. His vehicle is a flying sleigh pulled by eight reindeer named Dasher, Dancer, Prancer, Vixen, Comet, Cupid, Donner and Blitzen (with an option on a ninth, in the form of Rudolph, on nights with poor visibility). You might hear the sound of some Snowy Sleigh Bells as well.

He enters each house by the chimney, fills the residents' stockings (left hanging on the mantle for his attention) with the gifts and toys he brought, and then leaves the same way he came in. It is considered polite for the family to set out a treat of milk and cookies, for his snack, and perhaps a tidbit for the reindeer too. It is traditional in certain versions of the legend that Santa can tell when children are sleeping and when they are awake and will only deliver presents to children who go to bed when they're told to on Christmas Eve and won't come if they try to stay awake to see him. This was almost certainly something started by parents in more recent times, as it doesn't seem to appear in earlier versions of the story. It was likely popularized by the line "He sees you when you're sleeping; he knows when you're awake" from the song "Santa Claus is Comin' to Town." (German and Scandinavian traditions use this same idea as Scare 'em Straight Nightmare Fuel for toddlers). Note that this often simply does not apply in fiction and somehow even kids that are shown being told this still somehow end up getting to meet Santa Claus.

Officially, Santa delivers presents only to the children who have been good. Naughty children get the Boring, but Practical gift of coal, which they can burn in the furnace for warmth over the winter; not as raw a deal as it might seem to those of us who no longer burn coal ourselvesnote And lives on in the form of still giving kids who don't deserve toys practical items like tube socks. In even older traditions, he carried a bag of switches for whipping the naughty children. In the Netherlands and Belgium, Sinterklaas is famously accompanied in his work by a servant named Zwarte Piet (Black Pete), which tends to cause headaches with foreigners unfamiliar with the tradition and quite aware of the Unfortunate Implications he represents. (Note that in the Dutch tradition, there is no racist connotation whatsoever to dressing up as a jolly blackface servant and threatening to beat people up. Seriously.)note Perhaps not anymore. According to the Associated Press, the 2013 Sinterklass festival in Amsterdam drew protestors

saying Black Pete was a blatant racist caricature that should be banned. Zwarte Piet himself is a softening of an even earlier tradition in which Saint Nicholas used the services of an enslaved devil. Austria and southern Germany have The Krampus instead. Many other cultures that still look to Santa Claus as an actual saint still include this devil or imagine Santa Claus as doing battle with the devil on Christmas Eve, leading to even more strange reactions from foreigners who wonder what Satan himself is doing in, say, a children's Christmas film.

The traditional explanation for Santa's ability to achieve his annual deliveries is that he is a magical being. In works that think about or play with the implications, this may involve his being The Omniscient: he personally knows where everyone lives, what they want, what they've been doing... However, modern stories dealing with Santa give him access to a combination of magic and supertechnology; some versions even do away with the magic altogether (for example, the Christmas ep of Buzz Lightyear of Star Command has his supertech being used by the villains to commit tons of felonies). In addition, modern depictions of Santa's home have his workshop being a fully mechanized factory run by the elves. A common variation is to have Santa portrayed as not a single magical being, but as a god-like office held by a mortal, such as Ernest Saves Christmas, where Santa is a normal person who spends a large chunk of his (possibly magically lengthened) lifespan as Santa Claus, then passes the title off to someone else. Surprisingly, despite all that focus on Santa's delivery process, the one aspect of the legend that has rarely, if ever, been called into question is how Santa could accomplish such feats and still have huge numbers of people (often a numerical majority, even in fiction) who refuse to believe that he exists.

Also, for humorous effect he is often portrayed as a cold-hearted tyrant, running his workshop with an iron fist while the elves are an exploited and resentful workforce. One example of such skewering came at the hands of Futurama, which introduced a futuristic robot-Santa who judged the entire world as naughty (except Zoidberg) and hunted down the worst offenders every Christmas. Running a close second is the revelation by Anya in Buffy the Vampire Slayer that not only did Santa Claus exist, he was in fact a bloodthirsty demon — perhaps inspired by the devil present in older stories of him.

Since straight portrayals of Santa Claus in fiction have become classics, and re-aired every year, most recent works involving Santa Claus are parodies, deconstructions, or other twists on the legend. Even in strict children's fare, there is always some kind of wry twist on the material: in The Lion, the Witch, and the Wardrobe, for example, Father Christmas muses that he hasn't been to Narnia for many, many years, and proceeds to hand out lethal weaponry such as bows, arrows, and swords to three of the prepubescent protagonists. A major exception is the film The Polar Express (although, in all fairness, he's portrayed as less jolly than Santa usually is).

Since the beginning of the twentieth century, there has also been a small movement to explain how Santa came to be, and continues to be. The most prominent backstory for the modern Santa (meaning, not derived from various folklore), comes from L. Frank Baum's (of The Wonderful Wizard of Oz fame) novel, The Life & Adventures of Santa Claus. This story gives Santa a bit of The Lord of the Rings treatment, as there's plenty of strife and battles between the good fairies that raised Santa, and their enemies, a group of rock-monsters. This story has been made into at least two animated films, and continues to be one of the most popular backstories for Santa over 100 years after its first publication. Speaking of Tolkien, he too made his own spin on Santa Claus in The Father Christmas Letters. The Dresden Files has Harry saying that Santa is a fairy.note Butcher has hinted that he is basically the Fairy King of Winter and a counterpoart of sorts to Mab. One may assume he represents the goodwill and generosity that the harshness of Winter (Mab) brings out in people. Either way, he is a badass, and Harry knows it. Harry's not willing to summon him either. He'll mess with The Fair Folk, but Santa, no way.

The name "Santa Claus" comes from a Dutch variation of the name "St. Nicholas", "Sinterklaas". It is not, despite what fundamentalist Moral Guardians like to claim, an anagram of Satan. Well, it is, but that's decidedly unintentional. And his last name is spelled C-L-A-U-S, not C-L-A-U-S-E; the latter is part of a sentence or part of a legal contract. This was the basis for a famous Marx Brothers joke. ("There ain't no sanity clause!") The title of the movie The Santa Clause was an intentional pun on this.

An additional note: in the UK and Australia, Santa Claus is often called "Father Christmas" (such as in the C.S. Lewis and J.R.R. Tolkien examples above). Although Santa Claus and Father Christmas have picked up many attributes from each other, and are now basically considered the same person, they were originally distinct characters. Father Christmas was an Anthropomorphic Personification of the Christmas holiday itself (particularly its feasting and drinking aspects), and wore a robe rather than the suit that Santa Claus wears. He was considered to be as old as the first Christmas (unlike St. Nicholas who lived in the fourth century)note As Wiccans will be happy to tell you, he may even be older than that, as the Yule Father, the dating is ambiguous though. Examples of Father Christmas from before his merger with Santa Claus can be found in the Ghost of Christmas Present in A Christmas Carol by Dickens, and in the traditional plays of English Mummers.

Santa Claus as a character is widespread even in countries that aren't Christian, like Japan and China. In Japan, he's called not surprisingly "Santa Kurasu" and in China he's called "Old Man of Christmas".

If someone needs to be reassured that Santa really does exist, the traditional answer begins "Yes, Virginia"...On the other hand, Santa himself better watch out if he finds himself at a Philadelphia Eagles game, lest he get booed and has to dodge snowballs.note A young man dressed as Santa really did get booed and pelted with snowballs by Eagles fans during the halftime show in a game against the Minnesota Vikings on December 15, 1968, but it was more from frustration by the fanbase at a terrible 2-11 season put forth by the team that year; overall hatred of the team's owner, coach, and quarterback; and the miserable weather (the man himself was a replacement - the original Santa couldn't go due to the weather - and his beard was unconvincing).

Common plots in which Santa appears include: