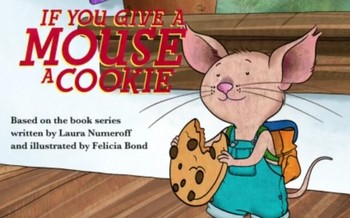 If You Give a Mouse a Cookie is a children's picture book written by Laura Numeroff and illustrated by Felicia Bond. Each page has a large, colorful picture and short sentence telling the story of a (nameless yet eponymous) mouse and an equally nameless boy. The story starts, naturally, with the boy giving the mouse a cookie. The story goes on from there, with the mouse needing a new item on each page. It ends up with the mouse, once again, wanting a cookie.

In 2015, a cartoon based on the original book was released on Prime Video. It was written, developed and executive produced by Ken Scarborough, known for Arthur and Doug. The cartoon features the boy (now named Oliver instead of being nameless) and mouse from the original picture book, with the cast rounded out by the animals from the other books, such as the pig, the moose, the cat and the dog. Originally only one special was produced, but in September 2017, Amazon announced

an actual television series, which premiered on November 7, 2017. The author and illustrator of the original books are both executive producers on the show. What Amazon describes as the second part of the first season was released on June 26, 2018. A Valentine's Day special was released in February 2020.

A narrated version of the original story was also featured on an episode of Reading Rainbow in 1993.