Played By: Brad Pitt, Eli Roth, Til Schweiger, Gedeon Burkhard, B. J. Novak, Omar Doom, Samm Levine, Paul Rust, Michael Bacall
"We will be cruel to the Germans, and through our cruelty they will know who we are."

A group of soldiers who have set out to put the fear of God into Nazi Germany. Started as eight Jewish-Americans, but were later joined by the German Sgt. Hugo Stiglitz after he murders 13 Gestapo officers and the Basterds break him out of jail. 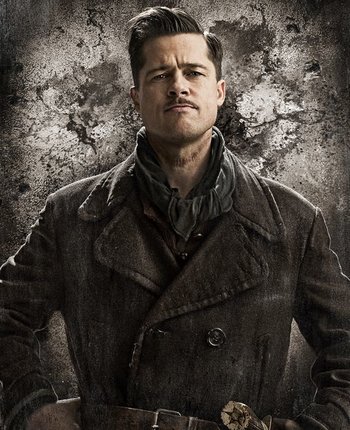 "You probably heard we ain't in the prisoner-takin' business; we in the killin' Nazi business. And cousin, business is a-boomin'!"
Played By: Brad Pitt
"Every man here owes me one. Hundred. Nazi. Scalps. And I want my scalps!"

A hilljack from the backwoods of Tennessee. Has a mysterious scar about his neck that is ultimately left to the viewers' imagination. Tasked with instilling God-induced fear into the Germans before the Armada, he puts together the American-Jewish "Basterds" - all too happy to kill him some Nazis. 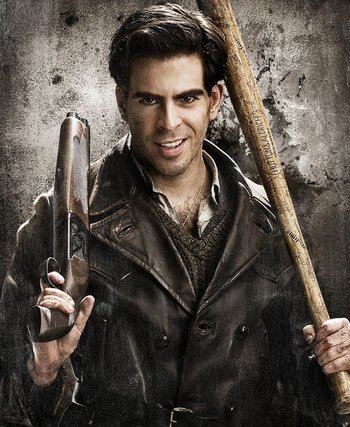 "Teddy fuckin' Williams knocks it out of the park!"
Played By: Eli Roth

More commonly known as "The Bear Jew", his infamy and brutality is so widespread among German soldiers stationed in France that many actually believe that he is a golem summoned by a vengeful rabbi. In truth, he is a Jewish-American soldier who really likes baseball. Unfortunately, there are no baseballs in Nazi-Occupied France, so he and his bat make do with Nazi melons. 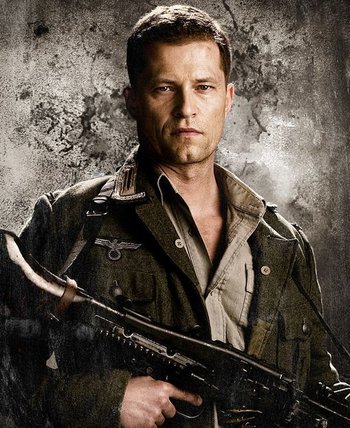 "Say "auf Wiedersehen" to your Nazi balls."
Played By: Til Schweiger

A psychotic serial killer who was, for a time, a German enlisted soldier. He gained infamy after brutally butchering thirteen Gestapo officers, and was promptly on his way to the gallows. But as it turns out, Aldo was a huge fan of his work and wanted him to play for his team. Hugo didn't even have to ponder on the possibility of killing more Nazis.

An Austrian-born Jew, he quickly fled and became an American citizen right around the time when the Nazi party was coming into real prominence. Afterwards, he joined the Basterds to kick a little ass. Acts as the team's translator, cause the Germans are too shit-scared of Stiglitz.

A Basterd who got roped into Aldo's insane plan of bombing the cinema following the Mexican Standoff turned Blast Out in the pub. He doesn't speak Italian, not that Aldo cares.

Played By: B.J. Novak
"The Germans' nickname for me is "the Little Man"?"

Known to the Germans as the "Little Man" - even though he's not the smallest of the Basterds - , Utivich is a Basterd who, for some reason, was captured by Landa along with Aldo in the hopes of his scheme succeeding. Despite coming off as timid, he is all too happy to follow Aldo.

A Basterd with a minor role. He's the shortest member of the Basterds. 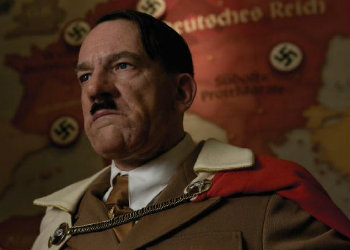 It's that one guy.

Hitler's Minister of Propaganda, he sees himself as the next (less Jewish) Fritz Lang. He...really isn't. 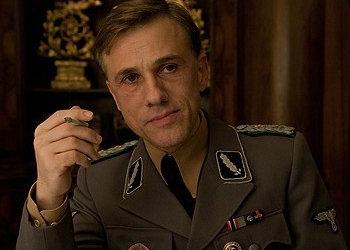 "I love rumors! Facts can be so misleading, where rumors, true or false, are often revealing."
Played By: Christoph Waltz
"You are now in the hands of the SS. My hands to be exact."

A Nazi colonel who is a damn good detective (in his words). Very good at rooting out Jewish families in hiding. This is how he makes the acquaintance of Shosanna Dreyfus, whose family's death he is responsible for. As fate would have it, he is responsible for the security detail for the film premiere....at Shosanna's cinema. Apart from Zoller, he's the only fictional Nazi at the gala, though he shares a lot in common with Reinhard Heydrich, the architect of Hitler's "final solution"; this is remarked on by Landa himself in the film. 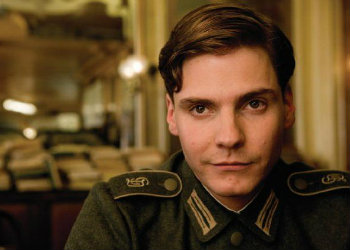 A charming German sniper who gained a hero status in Germany after mowing down nearly 300 American soldiers in a single day from a tower. He is now the centerpiece of Goebbels' latest propaganda film, Nation's Pride. Has a serious case of puppy-love for Shosanna. 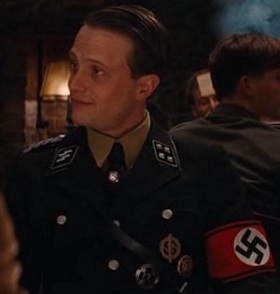 Something of a repulsive Gestapo Major, he works directly under Goebbels. Not particularly savvy, but very difficult to fool.

A German soldier under Hellstrom's command. He was given the night off to celebrate the birth of his son, Max, at a pub. Then it all goes to hell.

An honorable and loyal German soldier, who "respectfully refuses" Aldo's offer to rat out his comrades. He becomes The Bear Jew's first on-screen kill.

Played By: Rod Taylor
"Brief him."

It's that other guy.

Played By: Mike Myers
"We have all our rotten eggs in one basket. The objective of the operation: blow up the basket."

An English general under Churchill's command. 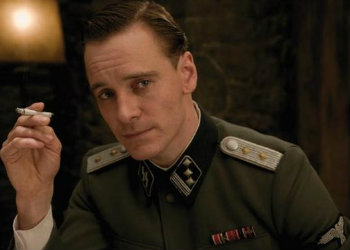 A former film critic and journalist who now serves in Her Majesty's Royal Army. His immense knowledge of German cinema makes him invaluable for the upcoming operation in Fenech's and Churchill's eyes. 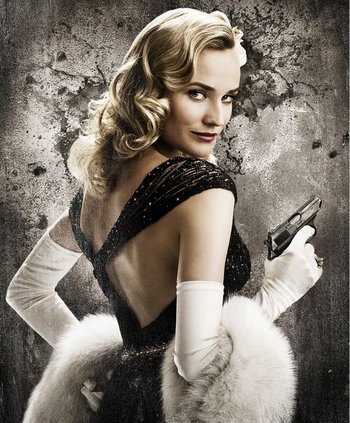 A beautiful German actress who has been secretly working for the Allies for quite some time, being Fenech's primary spy. 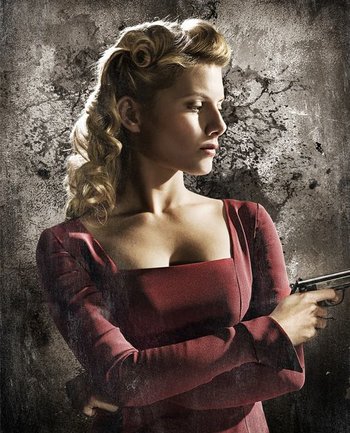 A French Jew whose entire family was murdered by Hans Landa's men. She eventually inherits a cinema, which ironically becomes the state for the premiere of Nation's Pride. Which ironically, Landa is providing security for. 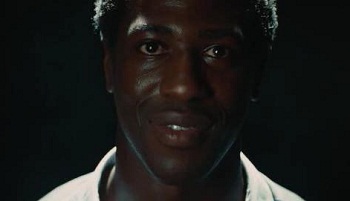 Shosanna's boyfriend as well as the film projectionist at her cinema. He's said to be the best.

A French milk farmer with three daughters. Landa intimidates and pressures him into exposing the Dreyfus family hiding under his floorboard.

The bartender of La Louisiane. Doesn't seem overly perturbed by the German occupation.

A waitress working at La Louisiane. Unlike Eric, she is deathly scared of the German soldiers.