A team formed by NegaDuck with four of Darkwing's most recurring/dangerous villains to take over St. Canard. Despite getting beaten by the Justice Ducks, they still work together at times, but become more of a Big Bad with his bumbling Quirky Miniboss Squad.

Darkwing's Evil Counterpart from a Mirror Universe where he has taken total control. Now he seeks to take over Darkwing's world and be Public Enemy #1, but can never seem to beat out Dr. Slug for the top spot. Not to be confused with the first NegaDuck, referred to here as NegaDuck I (with this one being referred to as NegaDuck II when discussing both NegaDucks.).
Megavolt/Elmo Sputterspark
Voiced by: Dan Castellaneta, Luq Hamet (French) 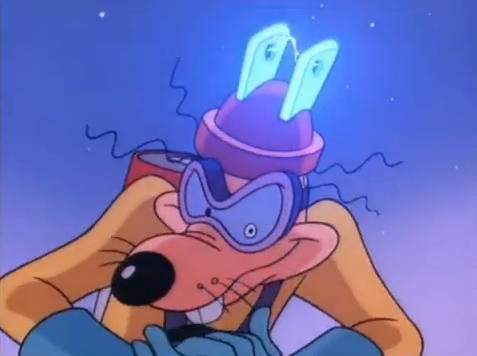 Unintentionally obtaining electrical powers (and maybe frying some brain cells in the process) from his experiment caused by some high school bullies, he now is a crook who wants to "liberate" the appliances and electrical items of St. Canard. 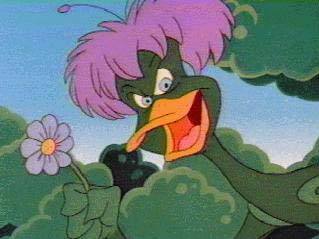 After having his funding pulled from his experiments with plants he experimented on himself and unintentionally turned himself into a plantduck capable of controlling plant life. His crimes usually involve him trying to fund his research (i.e. stealing), protecting plants or attempting to cure his loneliness. 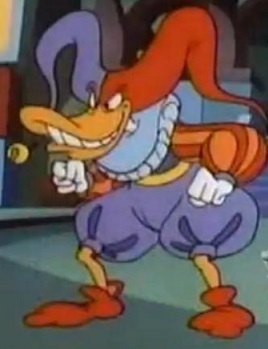 A deranged toymaker who turned to crime after the video game industry, mainly the game "Whiffle Boy" put him out of business. He creates lethal toys that look like normal ones, but he's infamous for his gigantic sized joke teeth. 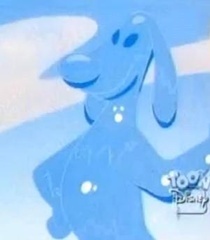 Originally a Corrupt Corporate Executive named Bud Flood who sold his Bud Flood's Sparkling Crystal Pure Flood Water while he was contaminating his competition during a massive heatwave. Darkwing accidentally startled him and he dropped into a vat of water he'd contaminated. He then turned into a being of pure water with the ability to shape it, heat it, chill it and turn it into hard water. Only appeared with the Fearsome Five afterwards. His salespitch-centric dialogue was difficult to write and the ways to defeat him were quite limited; pairing him with the others made this less of a problem for the writers.

The Fiendish Organization for World Larceny or F.O.W.L. is a criminal organization whose goal is to Take Over the World.

The three leaders of F.O.W.L. who give the operatives their orders. Their faces are covered in shadows and only their eyes and mouths are seen. 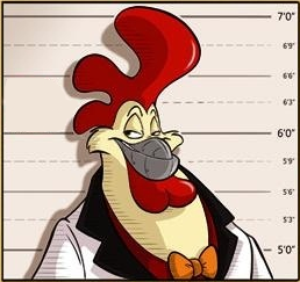 F.O.W.L.'s top agent whose smooth exterior masks the true villain he is. He literally has a steel beak, which can cut material in half if close enough. 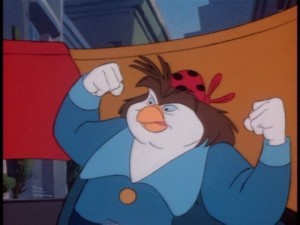 A former cleaning lady for a research lab who had accidental contact with an experimental bathroom disinfectant. Inhaling the fumes turned her into a cleaning-obsessed villain. She was later recruited by F.O.W.L. for their dastardly plans. She hates and fears dirt. 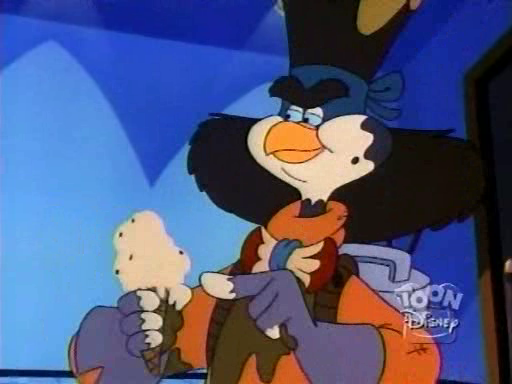 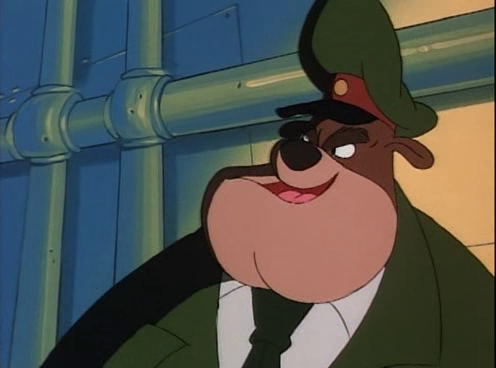 A stereotypical Drill Sergeant Nasty who steals S.H.U.S.H.'s Norma Ray and gives himself powerful psychic abilities in "Heavy Mental". He explodes after Darkwing, Launchpad and Gosalyn overload his mind with questions. May have been Killed Off for Real. 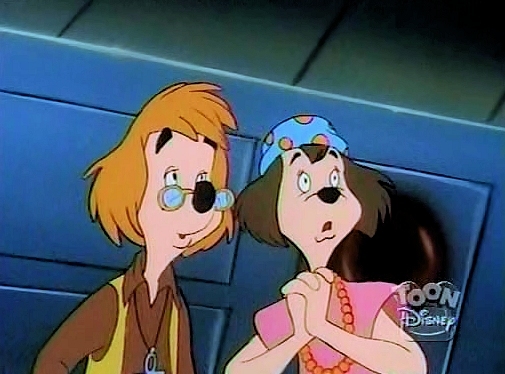 Major Synapse's hippie underlings changed by the Norma Ray, Hotshot could burn or freeze and Flygirl could move things with her mind.

The primary antagonists of the two-part pilot movie, "Darkly Dawns the Duck". Most of them don't return afterwards. 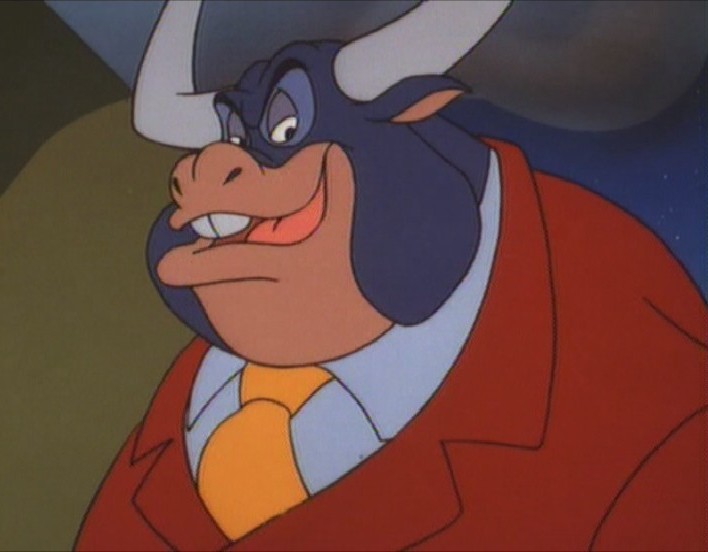 Probably Darkwing's most dangerous villain. A crime lord whose organization killed Gosalyn's paternal grandfather for his invention, the Ramrod, an anti-gravity gun he used to steal from the citizens of St. Canard. He was killed off when he was caught in the explosion of the Ramrod caused by Darkwing Duck, but he returned when F.O.W.L. salvaged his body and turned him into a cyborg.

Hammerhead Hannigan
Voiced by: Hal Rayle (in "Darkly Dawns the Duck"), Tad Stones (in "In Like Blunt"), Guy Pierauld (French) 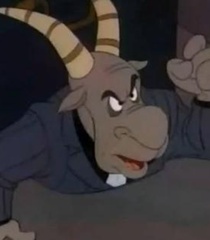 Taurus Bulba's lead henchman, he's more brawn than brain and uses the horns on his head (he's a goat) as weapons. He also makes a short appearance in "In Like Blunt". 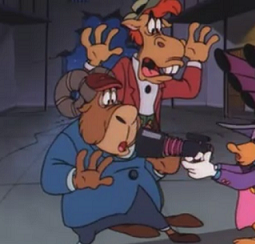 Taurus Bulba's henchmen, they're all brawn, no brain and in Mouth's case, can't shut up. 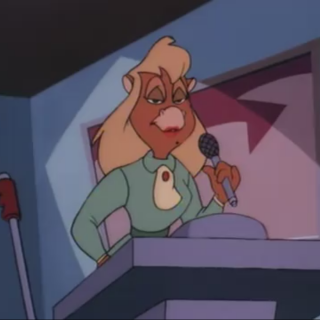 Taurus Bulba's secretary and assistant. According to her parents, she should have been a dental hygienist. 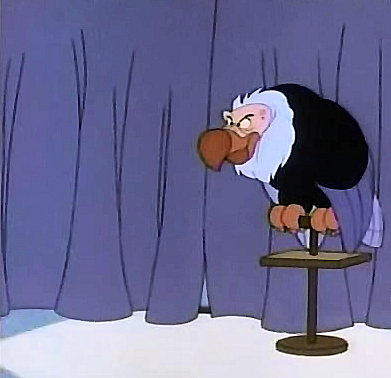 Taurus Bulba's pet condor, who's as evil and ruthless as his master.