The second arc of the Boom Studios comic book had Negaduck and Magica DeSpell kidnap and hypnotize every alternate version of Darkwing Duck they can find in the multiverse. Quiverwing Darkwing and Dark Warrior Duck end up turning on Negaduck and Magica and eventually the other Darkwings come to their senses as well. 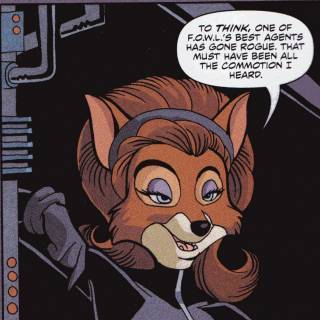 A foxy F.O.W.L. agent who turns out to be a double agent working for S.H.U.S.H.
Duckthulhu

A demon of unfathomable power whose mere presence drives people into insanity and mutates them into horrid monstrosities. Introduced in the 2010 comic series, F.O.W.L. High Command intended to awaken him and use him for world domination. Needless to say, Evil Is Not a Toy.

Chronoduck
A villain who only appeared in a story from the Boom comic's annual issue.
One-Shot 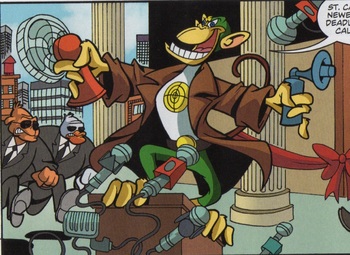 "Gotta change it up."
"Saint Canard, meet your newest, greatest, and deadliest foe! You can call this straight shooter... One-Shot."
An eccentric monkey baseball player named Carmichael Q. Anthony who became a supervillain after he was given a coat that could make different items for him to throw appear out of thin air.
Cat-Tankerous 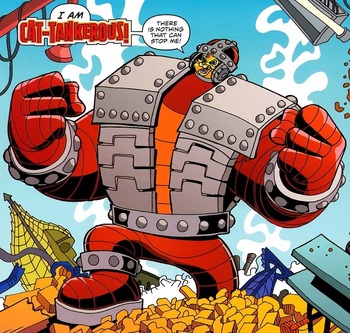 A classmate of Gosalyn's named Mortimer L. Marquand who was driven to become a criminal wearing Powered Armor. In the original version, it was because of an unrequited crush on Gosalyn, but Joe Books omnibus changed it to being a bullied kid protected by Gosalyn and wanting to follow her example.

Suff-Rage/Mistressterious
Real name Constance A. Dention, she was a third candidate in the election for mayor that Darkwing and Launchpad were competing in, but was disqualified after she turned out to be a villain.
The Phantom Blot
A supervillain in a black cloak who was encountered by Darkwing at the end of the Boom comic's original run.