When the Fearsome Five formed to take over St. Canard, Darkwing had to put his ego aside (but not before throwing a tantrum about wanting to be the only superhero in the city and being beaten by the Fearsome Five four times) and form a Five-Man Band of unique individuals to face them. The team itself only appears in the two parter "Just Us Justice Ducks" but the members make other appearances in the show. 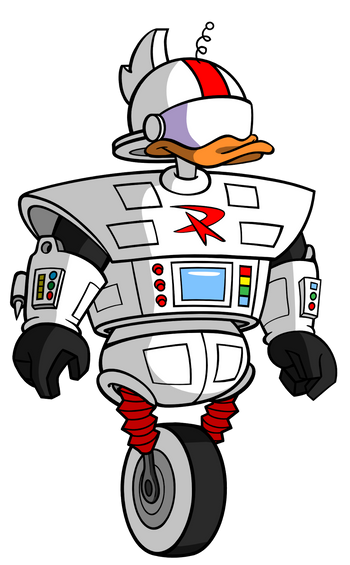 The high-tech hero of Duckburg who is Launchpad's old work friend, Fenton, an accountant for Scrooge McDuck. Darkwing, a Hero with Bad Publicity in St. Canard, is jealous of how Gizmo Duck is universally accepted and trusted by the city. In turn, Gizmo Duck doesn't like Darkwing's vigilantism. Despite this however, they work well together, when they put the petty stuff aside. 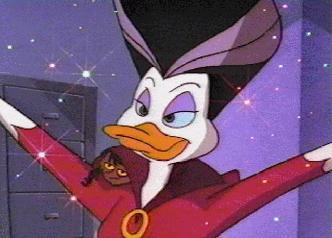 A sorceress and former CEO of "McCawber's Mushrooms" who shared a mutual attraction with Darkwing. Initially, she was a criminal, but eventually reforms, becomes Darkwing's girlfriend and earns his trust learning his secret identity. Almost always by her side is her three familiars, the bats Eek and Squeak and her grumbling tarantula Archie. 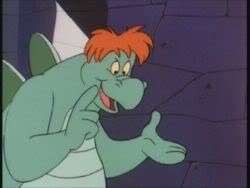 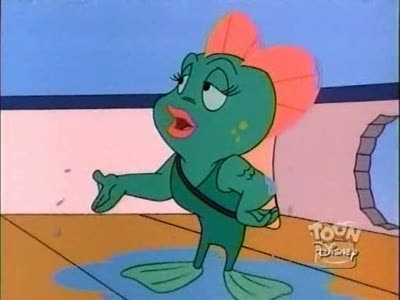 Originally a regular fish who was transformed by toxic chemicals, she was angered at St. Canard for polluting the ocean. She initially sought her revenge, but came to terms with Darkwing, who is helping to keep trash out of the ocean. She controls sea creatures by playing a song through a conch shell and also wields a trident. Often seen with her companion, a giant octopus named Hal.

A peacekeeping super-secret organization headed by J. Gander Hooter, trusted with handling international affairs - usually involving their primary foe, F.O.W.L. - that the regular authorities cannot. When S.H.U.S.H. is in need of a more unorthodox solution, they bring in Darkwing Duck. The organization is so secret that not even its leader knows what "S.H.U.S.H." stands for. 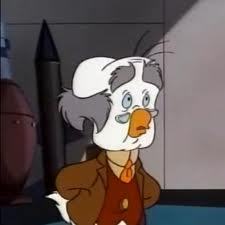 The head of S.H.U.S.H. who brings Darkwing Duck in on several F.O.W.L. missions. 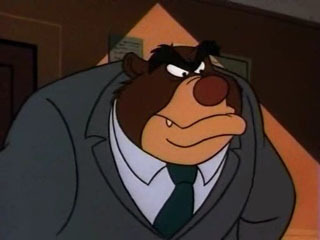 The head agent of S.H.U.S.H. who clashes with Darkwing on how to handle F.O.W.L.. He is the antithesis to Darkwing, operating strictly and uncompromisingly by the S.H.U.S.H. handbook. 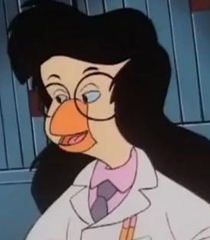 A scientist and inventor who is the head of S.H.U.S.H.'s research division. Somewhat absent-minded and slightly sadistic, her ultimate goal is to win the Nobel Prize for her inventions.

Derek Blunt
Voiced by: Peter Renaday (in a British accent) 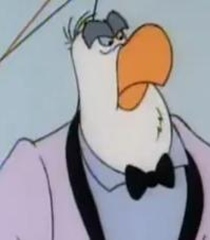 S.H.U.S.H.'s greatest secret agent, who didn't believe in using gimmicks and gadgets in the line of duty. He appears for the first and only time in the episode "In Like Blunt."

The neighbors in Drake/Darkwing's Möbius Neighborhood and Honker's family. Unlike Honker, they really aren't that bright; otherwise they would have discovered that their neighbor was Darkwing Duck a long time ago. With the exception of Honker, Drake cannot stand them, while Gosalyn and Launchpad don't seem to mind them. 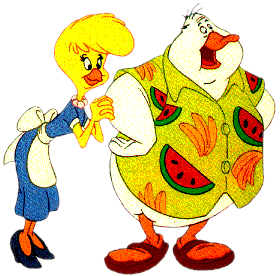 A loving but oblivious couple who live next door to the Mallards. Herb is a Quackerware (their version of Tupperware) salesman and Binkie's a homemaker. Herb also loves to barbecue and watch his favorite show, Pelican's Island. They are very friendly, but also unintentionally intrusive, and they're unaware how much of a brat their oldest son Tank is. 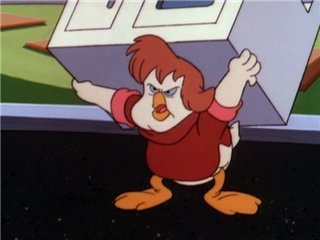 A really mean little boy, which is something his parents fail to realize. Honker is his usual target, but he has also been known to make fun of Gosalyn and attack Drake. 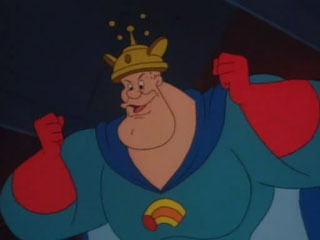 A humanoid Superhero who lives on Mertz, a planet of superheroes with only one "ordinary guy" to save. Initially, he was a failure due to his lack of intelligence and his weakness—when hearing a bell ring, he dances uncontrollably until he hears a whistle. Darkwing trains him to turn his weaknesses into strengths and save the day. 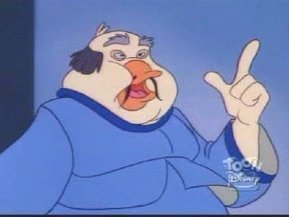 Darkwing's master in Quack Fu, who is at first disappointed at him for not learning the "belly bounce" technique and for using gadgets and weapons to fight with. He was corrupted by money and fame and tried to use a dragon in his plans to take over Kung Pow city. Darkwing stops the dragon in the end using the "belly bounce" and earns his master's respect.

When Darkwing was accidentally zapped by Megavolt's tron splitter, he was separated into purely good and purely evil halves. The good half was nice to a fault. However, after being galvanized via another zap from the tron splitter, he ends up becoming supercharged and able to save the day even with his pacifistic tendencies. Was remerged with NegaDuck I back into the regular Darkwing. 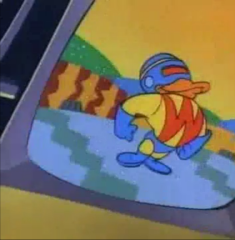 Star of the fictional video game in the series. When Darkwing was once trapped inside his video game, he teamed up with Whiffle (controlled by Gosalyn in the real world) to fight his way out. 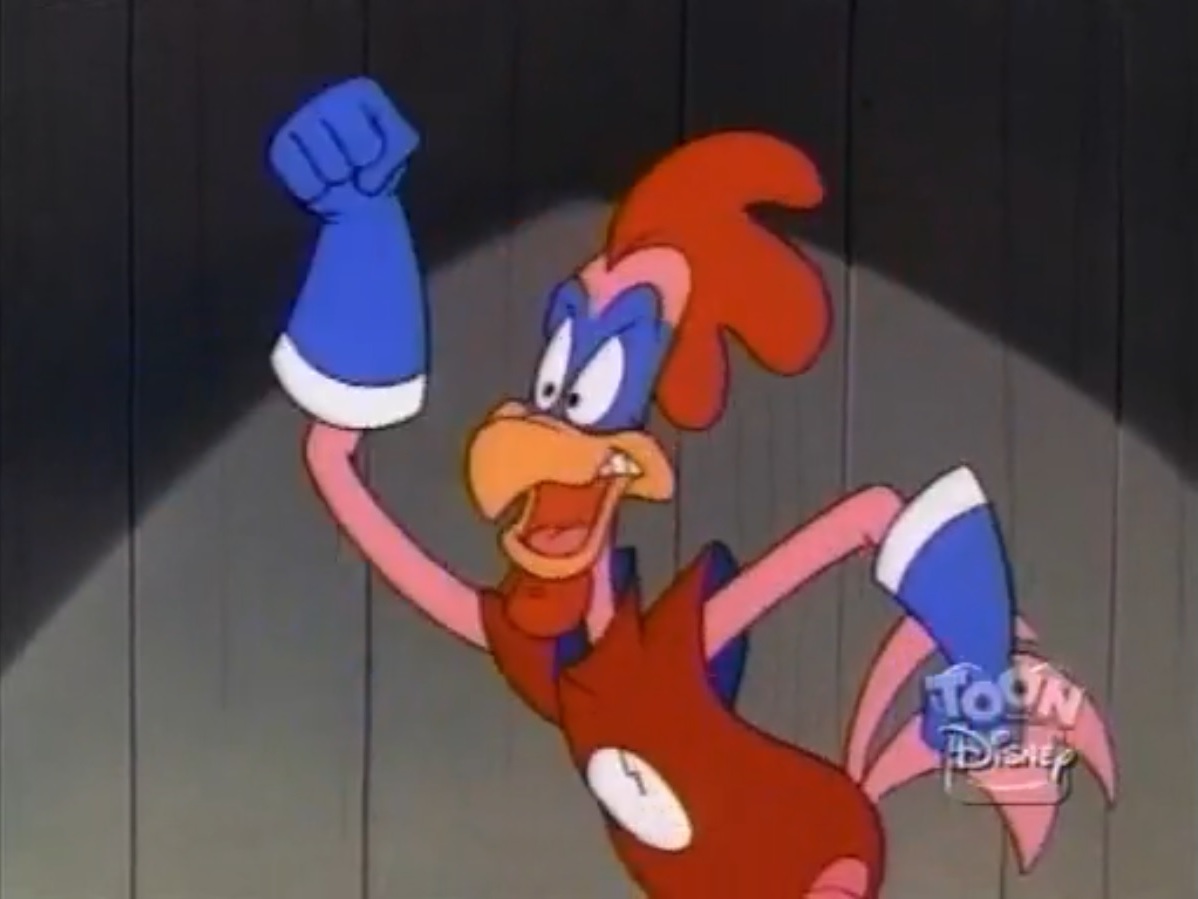 A stretchable hero who only shows up in the episode "Mutantcy on the Bouncy". He helps Darkwing defeat Cement Head.

Heroic versions of Darkwing's enemies in the Negaverse. They join forces with Darkwing to help him defeat Negaduck and get back to his own world.