You Fight Like a Cow
aka: Adding Insult To Injury 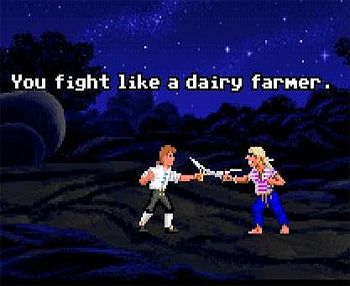 How appropriate. You fight like a trope page!
"Swordfighting is a little like making love. It's not always what you do, but what you say."
— Captain Smirk, The Secret of Monkey Island
Advertisement:

Two characters are fighting, probably with swords or fists. They're also engaged in Witty Banter or Volleying Insults or, perhaps, having a discussion on fighting technique, the meaning of life, what they had for lunch, or why new music is so awful. In comics (and comic-based cartoons), this is typically referred to as "quipping" and is standard operational procedure for most heroes. Except Batman.

Common when the action sequences need some dialogue. If done right, the dialogue is more memorable than the action, and will probably be quoted incessantly. This is also a common trick of the Warrior Therapist. Luckily for them Talking Is a Free Action, so they're never short of breath or time (and can hear each other clearly over all the crashing and punching and loud gunshots).

Compare Gunpoint Banter. If an insult's delivered just before the killing stroke, see Pre-Mortem One-Liner. If a few moments later, see Bond One-Liner. See My Grandma Can Do Better Than You and My Dad Can Beat Up Your Dad for similar insults.

Damaging a Legendary enemy to below half HP will cause them to heal to full HP. Also shown is a Super Mutant yelling, "You hit like a Radroach!"

Damaging a Legendary enemy to below half HP will cause them to heal to full HP. Also shown is a Super Mutant yelling, "You hit like a Radroach!"