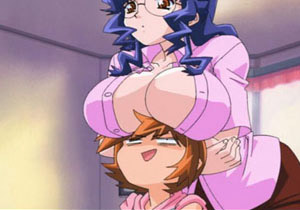 Those things are gonna break both their spines.
"It'll knock both your eyes out!"
— Tagline for the 3-D Movie The French Line, starring the buxom Jane Russell
Advertisement:

The use of female breasts for comedy, rather than (or in addition to) Fanservice. Although motherly characters are often given large chests, it is more common for the chest to be a cartoonish exaggeration (even within the context of the series) on a funny character for the purposes of physical humor. This even applies to a character who is otherwise very boyish-looking.

This trope takes a different flavor depending on the age of the woman. A voluptuous young lady lends herself to the usual sex jokes, or the occasional top-heavy Cute Clumsy Girl that knocks things over and smacks people with her twins when she turns around; an Apron Matron or Grande Dame will have huge breasts to make her look imposing and frumpy, with any slapstick involving them serving to undercut her humorless attitude; and with an old lady (especially a Dirty Old Woman or Abhorrent Admirer) you're treated to the Fan Disservice of saggy, deflated breasts that hang down to her waist.

Furthermore, you can make comedy from an out-of-shape guy having "man boobs", or a man Disguised in Drag using oversized Fake Boobs.

Contrary to what widespread Trope Decay would have us believe, this trope is not synonymous with "any pair of breasts bigger than a B cup", but refers specifically to large breasts regularly and intentionally used to comedic effect.

See also: Marshmallow Hell, Funbag Airbag, and Thanks for the Mammary, for related physical gags.

Compare with A-Cup Angst, D-Cup Distress, Petite Pride, Big Breast Pride, and on a different axis, Gag Penis and Joke of the Butt.