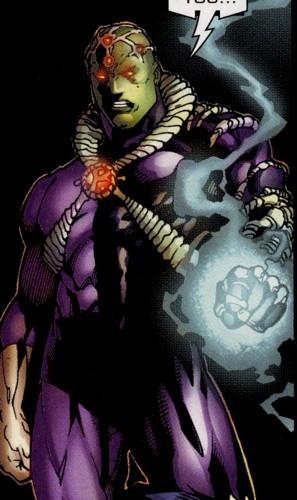 He received a major overhaul in 1983, turning him into a Skele Bot with vastly greater abilities note (in a story oddly reminiscent of the origin of V'Ger) , but this version was wiped out by the Crisis on Infinite Earths only a few years later. Later versions do usually retain a version of his skull-shaped spaceship introduced in this period, however. In comics, Skeletal Brainiac appears prominently in Crisis on Infinite Earths and Whatever Happened to the Man of Tomorrow?; in other media, this version appears in the later seasons of Super Friends and was immortalized as an action figure for the popular Super Powers toyline.

Fun fact: Brainiac is not, as you might think, named after a popular slang word for "intellectual." It's the other way around: that particular piece of slang actually started with him, and the writers of Superman are credited with coining it via a portmanteau of "brain" and "ENIAC", the first digital computer. So, yes, every time a bookish comic book fan gets mockingly called a "brainiac," his tormenters unknowingly pay tribute to DC Comics.

The versions of Brainiac: