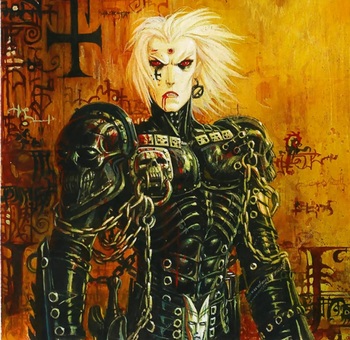 Originally Heinrich Aubsburg, he was a Nazi officer that died during World War II in the Eastern Front and ended up landing on Résurrecion upon his death. Being raised as a vampire, he joined Dracula's army and became a vampire knight under the tutelage of Lord Cryptos and rechristened as "Requiem". As it turns out there is more to Requiem than he knows and he becomes entangled in a plot to overthrow Dracula from power in Résurrection. 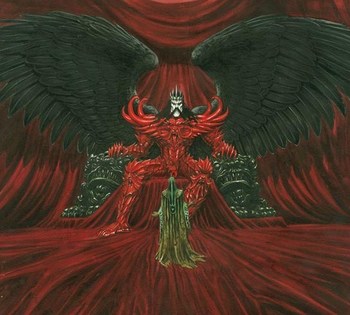 The unquestioned vampire king in Résurrection and ruler of Draconia. Distinguished from other vampires by the fact he used to be one too on Earth before ending up on Résurrection, being the first vampire there and not aging backwards like everybody else in this world, as well as granting the same ability to others. 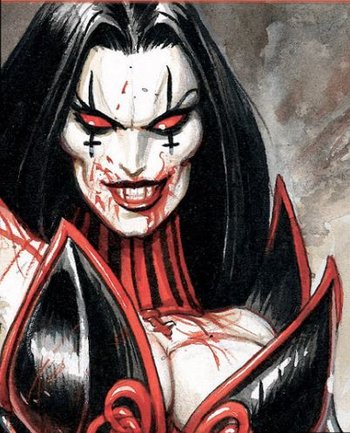 Claudia used to be a demon-worshiper that was sentenced to Résurrection after a ritual went horribly wrong and she was executed through spontaneous corruption by the very forces of Hell. She became one of the most wicked creatures on Résurrection, spending much of her time in sadomasochist sexual rituals. Claudia is also involved in a plot along with other vampires to dethrone Dracula.

The 5th Roman Emperor, he was reincarnated as a vampire in Résurrection. Dracula granted him his Dark Kiss that prevents him from aging backwards like others Hell denizens and now Nero serves as his most important enforcer.
Elizabeth Bathory
Dracula's wife and queen of Draconia. She was the infamous real-life Hungarian noblewoman that murdered countless virgin girls just to bathe in their blood and preserve her youth. In Résurrection, she received Dracula's dark kiss, making her one of the few truly immortal beings in Résurrection.
Otto von Todt 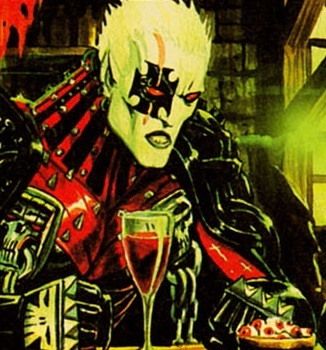 Originally Otto Hollman, a ruthless Nazi that died in exile in South America and became a Vampire Knight in Résurrection. Despite dying years after than Heinrich's own death, he ended up on this new world before him. He befriends Heinrich after he saved his life from a gang of scavenging zombies.

A lone vampire encountered by Requiem after he decides to desert the vampires and save Rebecca. Becomes a very unlikely ally after running into him a few times and may be the closest thing to The Lancer that Requiem has.
Lord Cryptos

A diminutive vampire lord that lives in the moon orbiting Hell. Since the vampires in Dracula's Resurrection age backwards, this would mean that Cryptos is extremely old due to his infantile state. Nevertheless, he is just as brutal as the other vampires of his creed. His true identity and who he used to be in life is unknown.
Lord Mortis 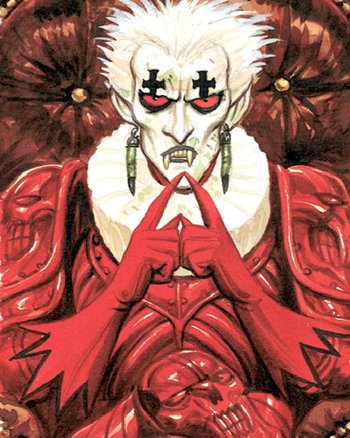 A vampire knight that takes an instant dislike of Heinrich, he is a key member of the Hellfire Club. While his true identity is unknown, Mortis survived the Holocaust and was Claudia's partner-in-crime while they were alive. 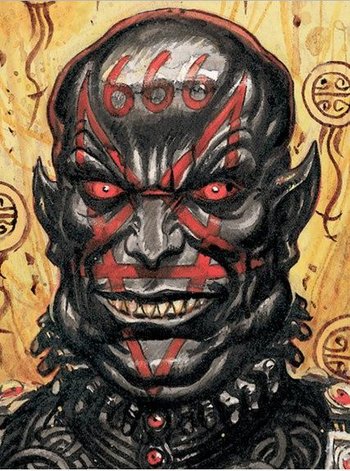 Back on Earth, he was the infamous occultist Aleister Crowley. On Résurrection, he became a vampire and Chancellor of the Bank of Blood. Even though he is Dracula's "son", giving him his dark kiss that granted immortality, Sabbat leads the Hellfire Club, a vampire group conspiring with Draconia's many enemies to have his father overthrown, and Sabbat ruling in his place.
Attila the Hun

The Scourge of God and embodiment of the Anti-Christ, his brutality on Earth earned him a place in Dracula's court as Admiral of his fleet. 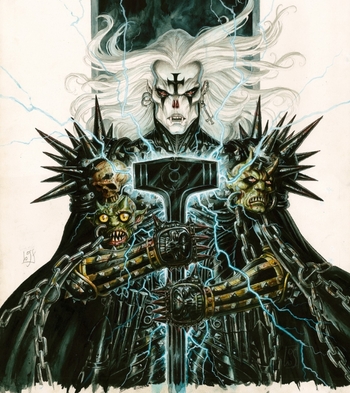 Once a brutal Teutonic knight who was secretly a Satanist, he fell into combat against Orthodox Russians from Novgorod and ended up in Résurrection as a vampire. He thrived on chaos and conflict until he was expired for challenging Dracula's authority.

A renegade vampire samurai that had turned his back on his race for mysterious reasons and now sided with Mother Mitra's ghouls. He used to be a Japanese soldier who participated in the Massacre of Nanking and died shortly after the end of World War II.
The Doomsday Man

A secret superweapon used by Dracula that he kept locked up inside a coffin. Its actually none other than Adolf Hitler. 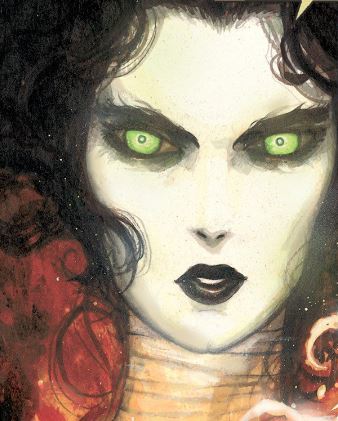 Requiem's love interest from Earth. She was a Jewish woman that fell in love with Heinrich, but ended up in the death camps where she was killed. Because her killer also became a vampire on Résurrection, she rose as a lamia and will continue to exist until either she or tormentor are "expired".

Sean
Previously, he was Claudia Demona's lover in life and unaware that she worshiped the Devil. When he discovered this, she killed him and as a result damned him to Résurrection as well when she became a vampire. Now he is a key leader of the lemurian resistence alongside Rebecca.
Igor 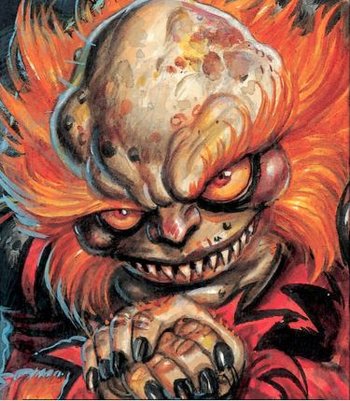 A kobold manservant provided to Requiem as a victim for him to feed on, he becomes a sidekick of sorts.

The Devil's Dictionary is a small pterodactyl/dragon hybrid that has knowledge of all the evil anyone has done in the universe. Originally belonged to Mother Terror before her expiring and now serves as Requiem's sidekick.
Mother Venus

She was the most notorious feminist of the Venus colony in the XXIIIth century, advocating systematic sterilisation of all males for the greater good. In Résurrection, she becomes a ghoul and replaces Mother Terror as head of their pirate fleet.
Mother Mitra
The supreme Guildmaster of the Ghoul Pirates. She is seemingly working alongside Mortis (and by extension the Hellfire Club) to bring down Dracula, but she has her own agenda: to completely overthrow vampires as the ruling class of Résurrection and install the ghouls in their place.
Liches

A ghoul member of an Eastern crew summoned by Mitra in their all-out attack on Necropolis, the vampires' city. Liches used to be Madame Ho, a female Chinese gangster that had her entire family killed in the Rape of Nanking at the hands of Japanese soldiers, and has a bone to pick with Dragon, who also participated in the massacre.

The biggest and most powerful werewolf in Résurrection, he was the Grand Inquisitor well known for his witch-hunts in the 15th century.
Queen Perfidia

Queen of the Dystopians, a Lizard Folk nation in Résurrection that is clearly supposed to be analogous to Great Britain. Her nation has been long time enemies with Draconia, but they have been in recently shaky peace which can only be described as lukewarm at really best.
King Ruthra 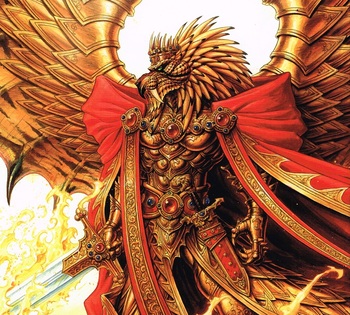 This comic's own version of King Arthur, he is the legendary Dystopian king that laid in slumber for eons until he is reawakened for the war against Dracula.

Tolecnal
A knight of the Round Table and Ruthra's second in command. Yes, that is Sir Lancelot.
The Arch-Hierophante

The supreme head of the Archaeologists, the faction responsible for studying and guarding technology in the setting. They were all mad scientists in life, and the Arch-Hierophante's identity is a mystery, though its stated was an specialist in human vivisection. After Dracula punishes his men and has his emissary's maimed, the Arch-Hierophante becomes outraged and sides with the Hellfire Club in the conspiracy plot to dethrone Dracula.
The Assistant High-Priest 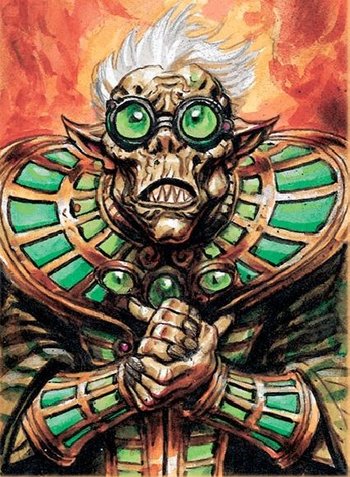 The main Archaeologist aboard the S.S. Satanic, his predecessor had his mask nailed to his face by Dracula as punishment. Serving as the original's assistant, he had taken his place as scientific adviser to Dracula. 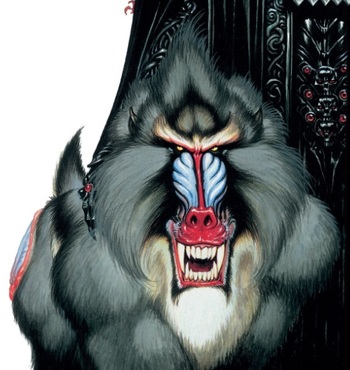 The elusive deity worshiped by Crowley in life that served as inspiration for his master work, the Book of Law. It incarnated in Résurrection when Crowley became Black Sabbat, and they are both in a romantic relationship. 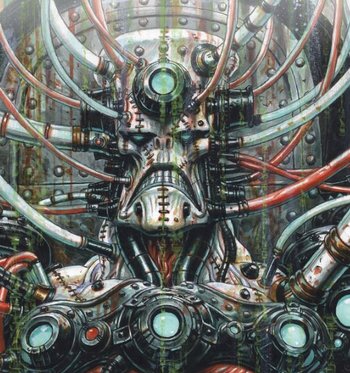 A massive flesh golem created by Dr. Dippel on the Arch-Hierophante's orders to assassinate Count Dracula and help the Hellfire Club take over.