Characters / Night in the Woods

The townspeople of Possum Springs in the world of Night in the Woods.

Beware, some of the trope titles themselves are spoilers.

"Obviously the world is seriously screwed up, but we're all gonna die if we don't keep living." 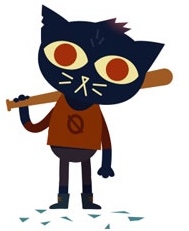 A 20-year-old college dropout cat who recently moved back into her hometown of Possum Springs who realizes something dangerous is going on in the woods.

"My entire life feels like running after something that keeps moving away into the distance while I stay in the same place." 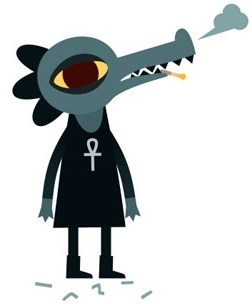 "I stayed here and grew up. You went away and stayed the same."

A 20-year old alligator who's two months younger than Mae. Mae's former best friend and one of the two characters she can hang out with. She runs the Ol' Pickaxe hardware store. 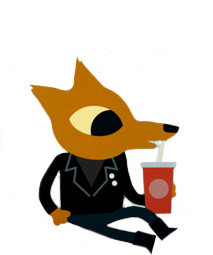 "I'M LORD OF THE SNACK FALCONS!"

A 21-year-old fox, a childhood friend of Mae's, and Angus' boyfriend. He works at the Snack Falcon. Rulz ok. 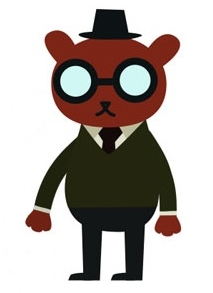 "So I believe in a universe that doesn't care and people who do."

A 21-year-old bear, and Gregg's boyfriend. He works at Video Outpost "Too". 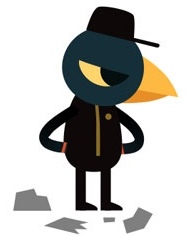 "You'll never half catch me, half coppaaaaah!"

An 18 year-old easy-going, if not weird bird guy that lives in town. Comes to watch the others practice music. 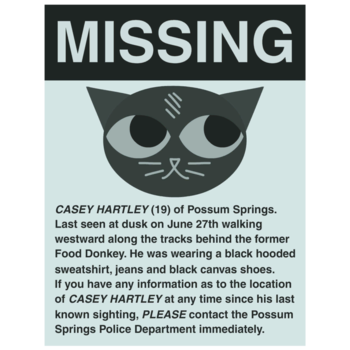 A friend of the gang's that's left town by the time the game's started.

Mae's mother. She works as an administrator at the First Coalescence Church.

Mae's father. He works at a supermarket meat counter.

"Being interesting is all you can hope to be."

Mae's grandfather, who died some time before the start of the game.

Mae's aunt, who is a local police officer.

The friendly new pastor of the First Coalescence Church. Karen quickly dedicated herself to the goal of opening a homeless shelter in Possum Springs.

A homeless man who lives in the woods behind the church. Pastor Karen tries to help him.

A bear woman slightly older than Mae who sits on her porch all day. She writes poetry, but it isn't always good.

A young 14 year old girl who sits on the rooftops of the town and fantasizes all day. If Mae comes back multiple times, they strike up a friendship.

A man slightly older than Mae who is often seen around town, trying to get a job since he was fired from his construction job.

A goat woman that Bea parties with. Something of a radical. 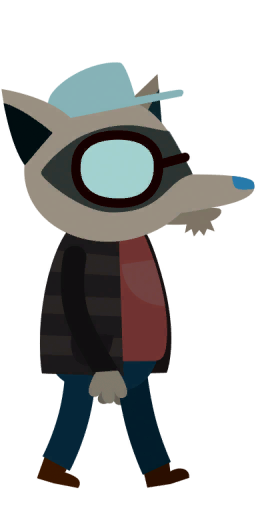 A raccoon who moved away from Possum Springs for college, but comes back for a party. Mae went out with him junior year. It... didn't work out.

A crocodile with whom Gregg sometimes associates for crime-committing purposes.

Possum Spring's city council members, of which Gary is the apparent leader for three other members: Colleen, Andrew, and Cathleen.

A bear, and Mae's old science teacher from high school.

A new character added in the Weird Autumn Edition. An elderly dog Mae meets at Trolleyside News, and an old friend of her grandfather's.

A trio of goth teenage girls.

A bird janitor that appears several times throughout the game. Heavily implied to be supernatural in nature.

Of the three possible Gods mentioned by the goth kids, he (possibly) is the one who is "Caring but Absent"

A quartet of musicians who were really popular in Possum Springs from the '20s to the late '40s. The members were a violinist bird, an accordionist alligator, a saxophonist bird, and a tubist bear. In the late '40s they became very spiritual and started spending nights at the graveyard playing for ghosts, they eventually froze to death and their spirits appear in Mae's dreams.

A TV comedy duo that Stan watches on most nights. Garbo is a dog and Malloy is an alligator. Their show seems to follow a late-show comedy talk show format with a lot of snark and one-liners. 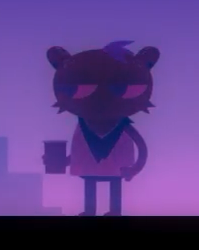 A bear girl that Mae can meet at the college party. They seem to hit it off, but Mae screws up before anything can come of it.

Jen
A new character in the Weird Autumn Edition. Gregg's cousin, who lives in Bright Harbor.

The Cult of the Black Goat

A group of townspeople who discovered a mysterious being dwelling in the mines. Said being, the Black Goat, demands sacrifices or it will strike the town with disasters and eventually cause the surrounding area to dry up, with the town fading away in the end.

The Dragon and a kidnapper for the cult. He was caught kidnapping a person by Mae, which kicks off a search for this "ghost".

God? (AKA The Astral Cat)

A huge, shadowy, feline entity that Mae confronts in her final dream. Insists that it is not actually God.

In the trifecta of possible Gods, it is "Present but Uncaring"

An ancient Eldritch Abomination that lives within the mines of Possum Springs. While it mostly is fed by its cult it sometimes takes a more personal approach to collecting sacrifices.

In the trifecta of possible gods mentioned, he is the one who is "Vicious and Roaming".

The protagonist of Lost Constellation. An alligator astronomer who wanders into a haunted forest on Longest Night to see her dead lover again and find the Ghost Star, where all souls go to after death.

A huge, hunchbacked rat who lives in a house in the middle of the forest.

A young wolf girl who was kidnapped into slavery by the Huncher. Former sawmill worker.

Snowmen created by Adina that become possessed by the spirits of the dead.

A cat monarch who seeks the Forest God and/or the Huncher after the death of his baroness resulted in her ghost haunting his kingdom.

An unnamed wolf who lives in a small cabin in the forest, he runs a bogus coffin-making business.