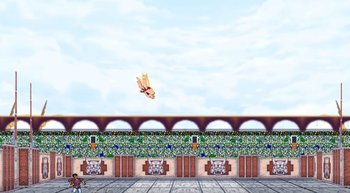 "Ultimate Rocket Saikyo Doom" proved to be about as effective as expected.