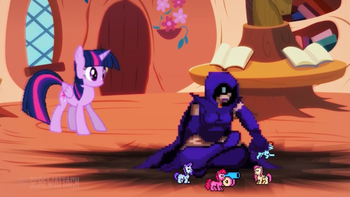 Bad time to get teleported from another dimension.

If you choose to interpret the Ambiguous Ending as Twilight surviving with Amusing Injuries, then that sounds like exactly the kind of thing Twilight would write. Though choosing to interpret the other way around also interprets it as Twilight's spirit saying this in hindsight. Either way, the line is hilarious no matter the context.
And now that season 8's out, should Twilight survive her fight, this'd make a great lesson to teach at the Friendship School. Always remember to avoid getting into fights with overpowered half-demon sorceresses from other dimensions!

This continues at the end of Doctor Fate's preview, where Boomstick instead blames Wiz for the loss of the whiskey because "He didn't catch it" when he threw it at Wiz.

Becomes a Brick Joke during the episode itself, where Boomstick leads into the Blue Apron ad with a similar comment.

Even funnier, Afro doesn't say another coherent word for the rest of the fight. Including after Jack cuts his arms off. "You jump good" ends up as Afro Samurai's Famous Last Words.

Made better by the annoyed and "completely done with this" expression and tone that he has while saying it.

After that Boomstick only refers to Zeon as Space Nazis.

Nightwing vs. Daredevil
Mario vs. Sonic 2018

This is followed by footage of Sonic drowning when he's a hair's breath from an air bubble.

The great thing about Gamabunta's line is that he's most likely blaming Jiraiya for getting him into this situation in the first place, but it also works for the ripped old man sealing him into a rice cooker, even though he's known him for less than a minute.