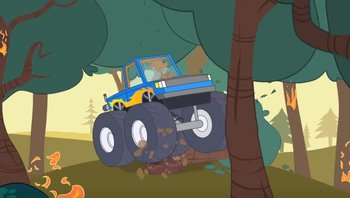 McGruff demonstrating why he's such a safe person to be around.

Lucario VS. Renamon
Balrog VS. TJ Combo
The Shredder VS. Silver Samurai
Smokey VS McGruff
Thor VS. Wonder Woman
Naruto Uzumaki vs. Ichigo Kurosaki
Batman Beyond vs. Spider-Man 2099
Sephiroth vs. Vergil