As the name indicates, everyone on this page is a Walking Spoiler, even more than the already spoilery main characters. Even their very existence is a major plot twist. Thus this page contains no spoiler-marking at all. You Have Been Warned. You wouldn't want a bad time, would you? 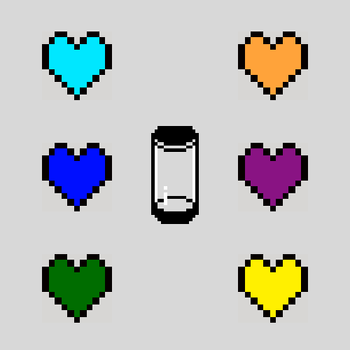 "Seven. Seven human souls, and King ASGORE will become a god.
Six. That's how many we have collected thus far."

The six humans who fell down into the underground before the Player Character did. Their SOULs were harvested for the sake of breaking the barrier imprisoning the monsters and exterminating the human race. You can find their old weapons and armour scattered throughout the world.

Patience is a virtue.

Take risks and be brave.

Integrity is choosing courage over comfort.

Take notes and keep on persevering.

Kindness makes the world go round.

For truth, justice and the human way.
The Amalgamates

A group of abominations created by accident from a terrible experiment involving Determination.

Thought you were just the Player Character here? Nope! Frisk and the player are implied to be separate entities in Undertale; the latter simply dictates the actions of the former. But remember that Undertale isn't a typical RPG; all of your choices will affect the game world... for better or for worse.

Depending on the interpretation, you either play as the Fallen Child (see their page) or yourself. Either way, this page describes the role of the Anomaly.

The "Mysteryman" sprite commonly believed to be Gaster.
"THIS NEXT EXPERIMENT SEEMS VERY VERY INTERESTING."

The man who speaks in hands. Dr. W.D. Gaster was the original royal scientist, before Dr. Alphys. Can't find him? Well, he didn't exist in the game at all for a while. Originally, if one were to explore the game's files, they'd come across a few odd NPCs, rooms, and messages that were cut. If a player decided to insert these aspects back into the game, what followed was the mysterious tale of a brilliant mind who invented a machine that accidentally caused him to be shattered across reality, with his fate uncertain. Even to this day, no one knows the complete story of W.D. Gaster… well, no one that wants to talk, anyway.

And note that the above instructions on how to activate him are in past tense because now you can access these previously cut elements randomly in the game without having to alter your game. A second Goner was also added in the Switch port, and a figure implied to be very close to him facilitated the reveal of Undertale's successor, Deltarune, with the game itself having a notable amount of nods to the mysterious scientist. As for what this means, however…

Gaster's Followers and Goners
"However, his life... was cut short."

A group of characters that are all related to the game's internal "Fun" value; much like other Easter Eggs related to Gaster, they will only appear if it is at certain values. Additionally, if the player leaves the room that they appear in, they will not reappear. There are five characters total: Gaster Followers 1-3, Goner Kid, and Goner Clam Girl. The former three directly talk about W.D. Gaster himself. Goner Kid does not, but functions similarly to the followers. Goner Clam Girl also does not talk about Gaster, and instead appears in place of the normal Clam Girl for one line of dialogue.

Tropes that apply in general