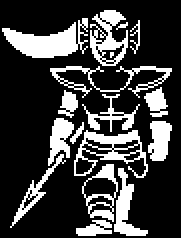 "Unless you learn to face danger head-on... You won't last a SECOND against ME!"
Click here to see her Genocide run form. 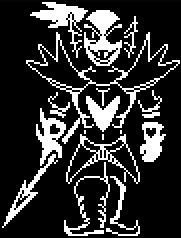 "You're gonna have to try a little harder than THAT."
"SCREW IT! WHY SHOULD I TELL YOU THAT STORY WHEN YOU'RE ABOUT TO DIE!?! NGAAAAAHHHHHHHHHHHHHHHHH!"
The captain of the Royal Guard that protects the underground. Likes spears. Dislikes humans.
Advertisement:
Likes throwing spears at humans.
open/close all folders
A-C
D-K
L-R
Advertisement:
S-Z