It doesn't seem much for conversation.

A cotton heart and a button eye, you are the apple of my eye.

Life is difficult for this enemy.

This monster is too sensitive to fight...

Stereotypical: Curvaceously attractive, but no brains...

Serving Size: 1 Monster. Not monitored by the USDA.

It seems evil, but it's just with the wrong crowd...

This teen comedian fights to keep a captive audience.

NEVER do your homework!!

Rebels against everything!! Looking for its friend Snowy.

I just loooove my hat, okay?

This teen wonders why it wasn't named "Ice Hat".

Man, you guys SUCK at this.

Hohohoh! Go ahead and laugh...

Doggo, Lesser Dog, Greater Dog, Dogamy, and Dogaressa (the latter two often being called the "Dogi"). A series of armored dogs guarding the path from the Ruins to Snowdin.

Sorry... for NOTHING *ollies*

Glyde is thinking of new slang for the word "cool," like "Freakadicious."

Wosh u face
Wosh u hand
Wosh u leg

This humble germophobe seeks to cleanse the whole world.

A large, muscular monster who is disliked by other monsters.

Tone-deaf. She's too ashamed to sing her deadly song.

A Moldsmal with some odd lifestyle choices.

Hot enough for ya!? 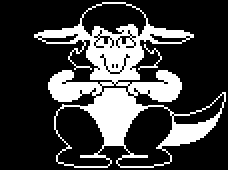 This creature is definitely in the wrong time and space!

Its future looks brighter and brighter.

This manipulative bully ALWAYS gets what it wants. 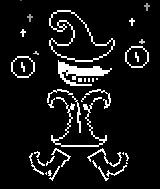 Please and thank you.

A mercenary monster that uses magic. 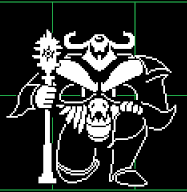 This cobrafied carrot has a headful of tasty snakes.

Can't decide on a face.