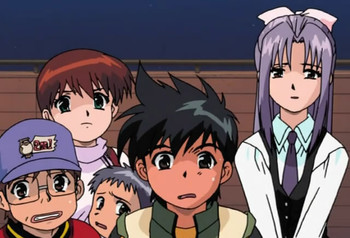 A group of kids who discover the "Ghost Diary" of one of their mothers, who was a powerful exorcist before her death. They mostly goof around, attend school, and battle evil spirits, but they differ quite differently in personality depending on the version you watch. 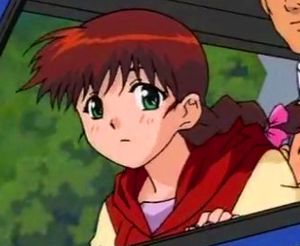 The main protagonist and daughter of the late Kayako Miyanoshita, descended from a long line of "Quasi-lesbian Ghost Hunters." She possesses her mother's ghost diary, which she can use to send angry spirits to "Spiritual Sleep." 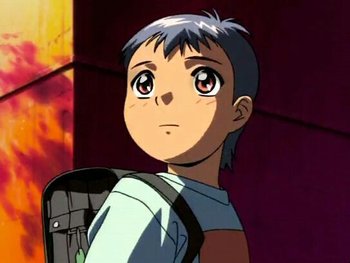 Satsuki's little brother, who has an undefined mental disorder (at least in the ADV dub) and bonds with the demon possessed cat they've just picked up.

"If you won't think of him and then consider all the Halo playing and monkey spanking I've sacrificed!"

A boy living next door to Satsuki and Keiichirou.

"There's some weird red fog at the school and I just saved a ton of money on my car insurance by switching to Geico."

"A dirty slut like you will be the first to burn in Hell if we don't stop that ghost!"

An upperclassman girl the group meets who has special psychic connections to spirits. In the ADV dub, she's also a born-again Evangelical Christian.

"God, you are the four of the ugliest fucking kids I've ever had the misfortune of laying my eyes on, I can't wait for this bitch to kill you."

Satsuki and Keiichirou's cat Kaya, who ends up being possessed by the demon Amonojaku.

Adults and Other Kids

Satsuki and Keiichirou's deceased mother, who was an exorcist in her youth and responsible for putting most of the ghosts in the series to spiritual sleep. Although her work as been undone by urban development causing the ghosts to be released back into the world, she continues to guide her kids through a journal she left behind with details on how to defeat each ghost.

"I don't need another goddamn reason, either!"

Satsuki and Keiichirou's father. He works as an engineer for a construction company, and remains generally unaware of the paranormal activity around him.

Satsuki, Hajime and Leo's homeroom teacher. Like most other adults in the series, he's unaware of the presence of ghosts, though he is often threatened by them.

Keiichirou's teacher. She was put in charge of the school's broadcast room after the students running it got spooked by Akane.

The principal of the elementary school.

A shy girl who tends to the school's rabbits. After her favorite pet rabbit Shirotabi dies, she uses a spell to bring him back, but at the cost of him turning into a monster at night.

Also known as the bathroom ghost, Hanako resides in the old schoolhouse.

A statue of the 19th century Japanese philosopher

that resides outside the old schoolhouse, but is shown to be alive.

A dog with the face a middle-aged human man.

A ghost that appears from the toilet. He'll ask the toilet's user if they want red paper or blue paper. Answering with either leads to a gruesome death.

A kitsune-like spirit that resides inside a set of stone stairs. It grants wishes to whoever makes them while standing on the fourth step, but with horrible repercussions.

A ghost haunting a piano in the old schoolhouse. If one hears him play "Für Elise" four time, they die.

The ghost of a boy who was hit by a car the day of the school sports festival, which he had been training hard for. He's able to shapeshift between his regular self and a demonic Horned Humanoid with a scythe.

A flying hag carrying a scythe who attacks children who are home alone.

A ghost inhabiting a mirror inside the old schoolhouse. It captures whoever looks at it and replaces them in the real world with a replica who then tries to trap more and more people inside mirrors.

A deity who oversees the crossing of the deceased across the Sanzu River. She tries to force Leo onto the ferry after he accidentally ends up in the spirit world by accessing a cursed website called Yomi Dash Net.

The deceased pet rabbit of a girl named Mio, who brought Shirotabi back to life in a black magic ritual, but at the price of him turning into a giant demonic monster at night.

"I know what you're thinking. Why aren't I Pakistani or some stoned, dreadlocked Jamaican. Well you're all being racist. Creepy Japanese men can be cabbies too, you know. But women should never be allowed to drive."

The ghost of a taxi driver who died while driving home to his daughter's birthday party. Ever since then, he has ferried lost travelers into Anamaneki, a tunnel where the living have their lives sucked away by the restless spirits within.

A possessed doll who infiltrates Satsuki's home and tries to kill her with an army of toys.

A ghostly nurse occupying the hospital where Satsuki's mother died.

The ghost of an art teacher obsessed with Leonardo da Vinci who killed himself after his work was ridiculed. He resides inside a painting of the old schoolhouse done by Satsuki's mother when she was a student there, but gets released when Satsuki makes an identical painting. He pulls inside unsuspecting women to paint them, but kills them when he's finished.

The vengeful spirit of a woman who died before her wedding day after being struck by a taxi. She haunts the area where she died, scaring taxi drivers who drive that way at night. 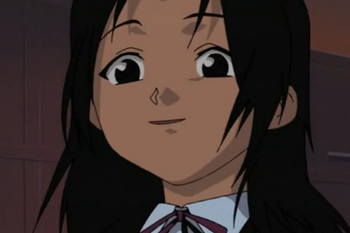 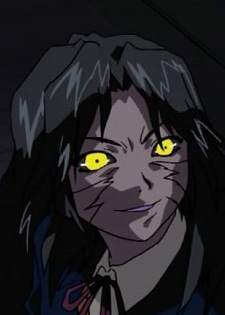 to see her true face

"It'll be all right. Just make sure none of you say anything about this. And if you decide you don't like this there's a way to quit in the middle. Okay?"

A classmate of Satsuki's who ropes her into a schoolyard game of casting spells to grant wishes. Unfortunately, she is actually a horrific creature named Yamime, who only wishes to glut on and torment gullible schoolgirls.

The head ghost haunting an abandoned building set to be demolished. It lures in and kills anyone who enters, and controls a variety of ghosts inside the building.

The ghost of a young girl who drowned in a lake next to an inn in the snowy mountains. She pretends that Satsuki's cousin Miyuki is the actual ghost in a scheme to get Miyuki killed.

The ghost of a girl who died of a sudden heart attack while broadcasting the school announcements. Any student who takes her place and hears her voice over the speakers is then cursed to die.

The ghost of a motorcycle punk who lost his head in an accident. Every year on the anniversary of his death, he goes around decapitating everyone and everything that has a head, including statues.

The final threat fought in the series, a giant stone demon who wants revenge on Satsuki and her family for being sealed away.