This page covers the characters who join during Lyn's Tale and make up Lyndis's Legion.

During Lyn's story, these tropes apply to all characters: 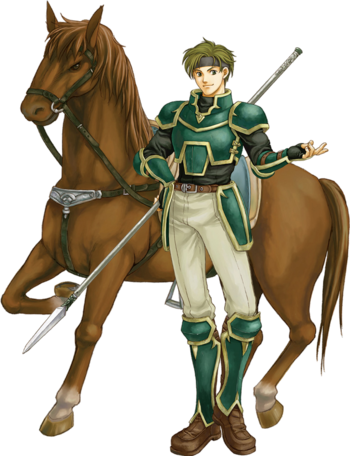 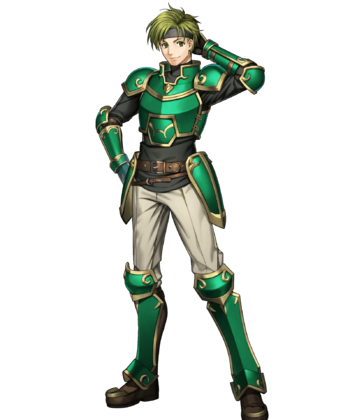 “Would you not favor me with your name? Or better yet, your company?”

The first and undeniably the oddest person Lyn meets on her journey, Sain is a gallant cavalier in service to House Caelin, full of "passion and fire," beloved of the populace who sends women swooning... or so he would have you believe. In reality, he amounts to little more than a skirt-chaser. Considered lazy and foolish by his comrades in Caelin's knights, Sain desperately wants to be a hero (mostly so he can get chicks), it’s just that he isn’t very good at it, at least at first. 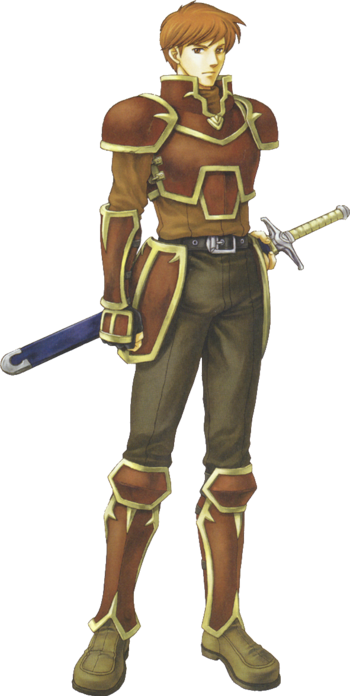 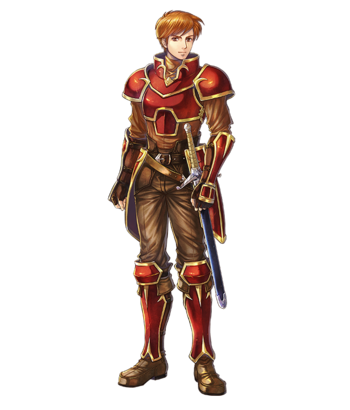 “Our territory may be small, but our knights are among the bravest!”
— Kent to Heath in a support conversation

Sain's associate, who evidently does the thinking for both of them, Kent is another of the knights sent by Caelin to retrieve Lyn. Kent has a good head on his shoulders and a fair knowledge of battle tactics, which he will gladly explain to you during the Forced Tutorial. He is totally devoted to Lyn's service, something that may simply be duty or may be, as Sain suspects, a sign of attraction. 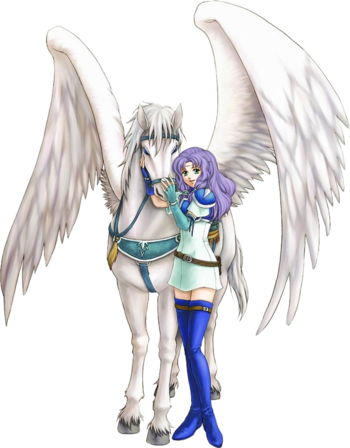 “W-Well, what was I supposed to do? All those bees came flying out at me! I was so frightened...”
— Florina to Lyn in a support conversation

A childhood friend of Lyn's from Ilia. The first Pegasus Knight to join the group, she pledges her support to Lyn due to their friendship. After helping her against Lundgren, she stays with Lyn until Nergal rises up. As Castle Caelin is under attack, Florina manages to escape and reach for Eliwood's crew. 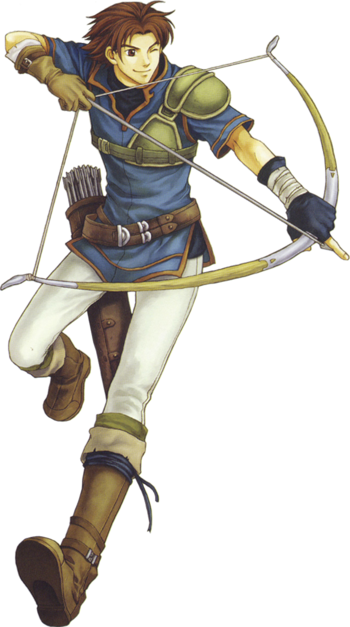 Archer Without Equal
Rath: But... Wil... You are still... strange.
Wil: Huh? W-Why? Nonsense. I’m normal! I might as well be Normal Archer number three!
Rath: ... Number three? Why three?
Wil: Well... No reason, I guess. It just seemed... pretty normal.
—Wil and Rath in a support conversation

A young archer from Pherae, he left his village a few years ago to earn his fortune. Met Lyn in a squabble with some bandits in Bern, and after defeating them he joined her retinue even coining the name "Lyndis' Legions". He's the childhood friend of Rebecca and her brother Dan, the latter of whom he left with before they were separated. 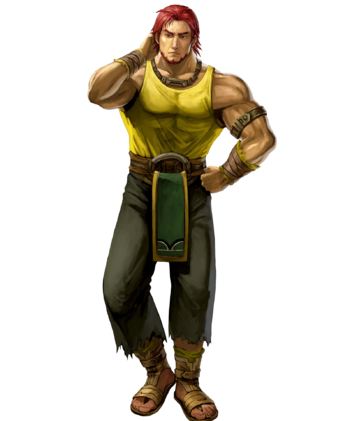 A quiet but kind man from Bern, who joins a band of brigands to make money for his ill wife, Natalie. Has a change of heart after meeting Lyn and joins her group. At some point between Lyn's story and Eliwood's story, he and Natalie moved from Bern to Pherae. In Eliwood's story, he is still making money to help his wife and joins early on with Bartre.
Class: Fighter
Voiced by: Kenji Kitamura (Japanese) (Fire Emblem Heroes), Kirk Thorntonnote uncredited in the vanilla variant (English) (Fire Emblem Heroes)
Serra 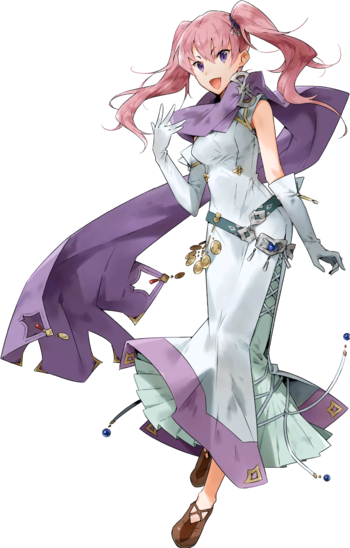 A loud, obnoxious priestess in service to Ostia who hired Erk to be her escort. They met Lyn and joined her party after dealing with a group of bandits near the Bern border. She later joins Eliwood's party by proxy of joining Hector on his quest. Although many characters (and gamers) find her intolerable, she has pains within that she hides from the world...
Class: Cleric
Voiced by: Ari Ozawa (Japanese, Fire Emblem Heroes), Kate Higgins (English, Fire Emblem Heroes)
Erk 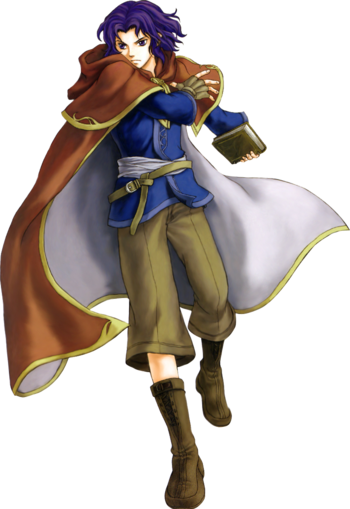 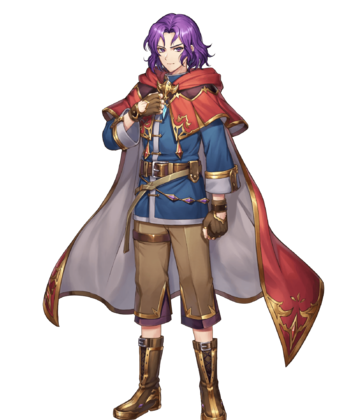 Later, while escorting Priscilla, they end up stuck in Laus due to its corrupt Marquess being infatuated with his employer. He and Priscilla join Eliwood's party in exchange for their assistance, also hoping that it may help her in finding her missing family. He's often quite uptight, but mellows around people he's closer towards. 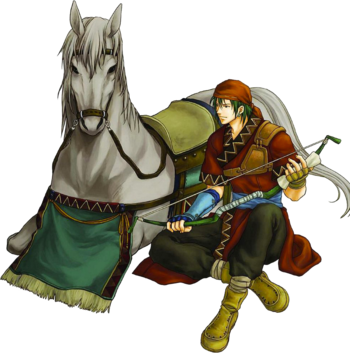 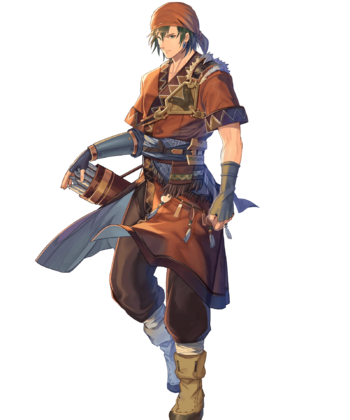 Wolf of Sacae
The son of Dayan, tribal leader of the Kutolah Tribe in Sacae. He was sent away from his tribe as a child due to a prophecy stating that he would play an important role in saving the world. Eventually became Captain of the Palace Guard at Araphen, where he met Lyn during an attack by Lundgren. He joined her party after witnessing the extent of his liege-lord's bigotry, and disappeared after her defeat of Lundgren before re-emerging as a mercenary and rejoining the group on her behalf. He is the father of Sue from The Binding Blade.
Class: Nomad
Voiced by: Kenjiro Tsuda (Japanese, Fire Emblem Heroes), Jacob Craner (English, Fire Emblem Heroes)
Matthew 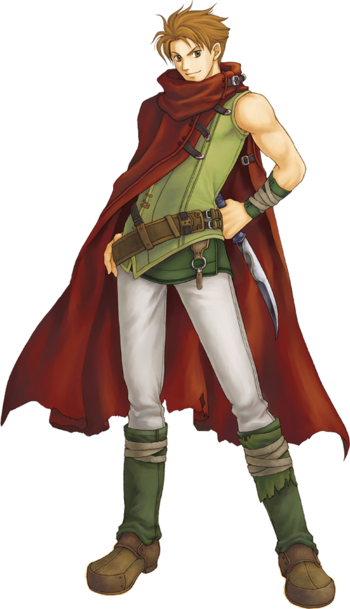 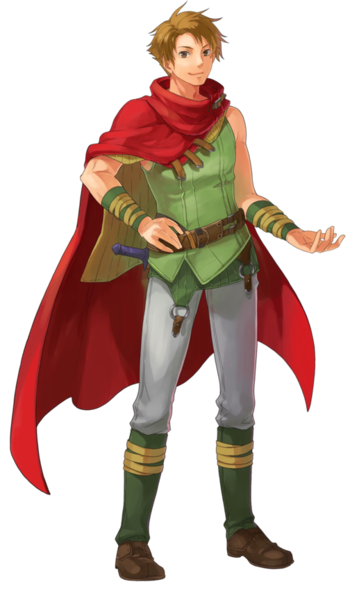 A mischievous and sly young man, good at catching info and stealing things. He's actually one of the top spies of Ostia, who first aids Lyndis and tells his lords about what happened, then pledges his loyalty to Hector and joins him in his quest. For some odd reason, he speaks with British slang.
Class: Thief
Voiced by: Soichiro Hoshi (Japanese, Fire Emblem Heroes), Ben Diskin (English, Fire Emblem Heroes)
Lucius 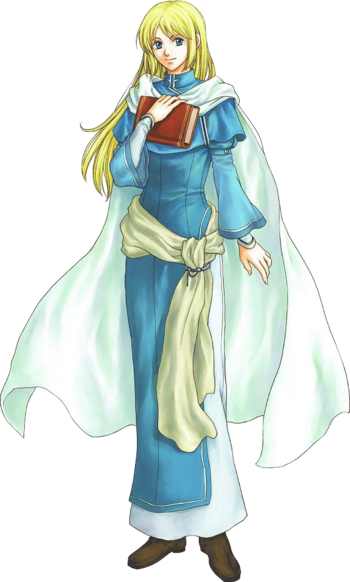 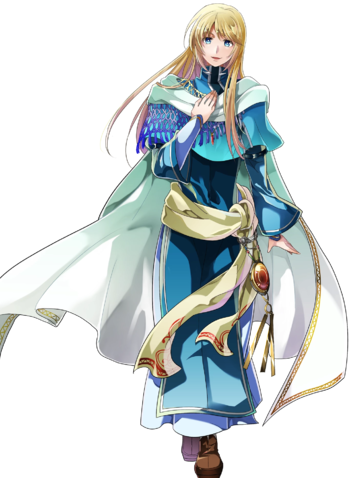 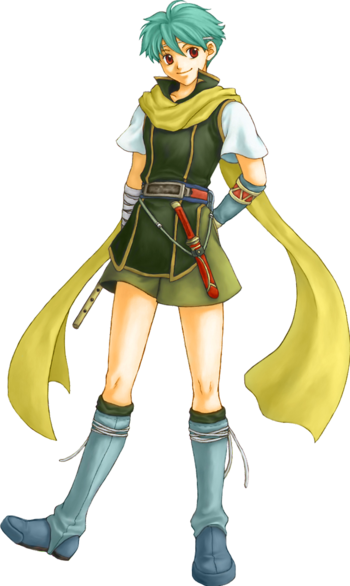 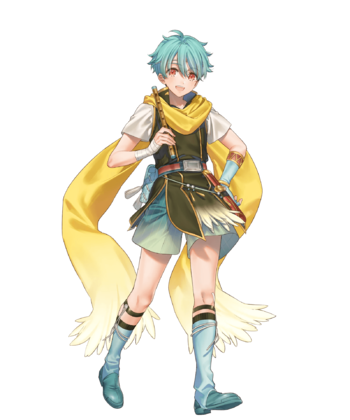 Child of Destiny
A peppy young minstrel who works as a travelling performer with his soft-spoken older sister, Ninian. They seem to have really lousy luck, however, as a mysterious group is hell-bent on capturing them for Gods-know-what purposes. After Lyn and Eliwood help to rescue Ninian, they stay with the group until Lyndis reclaims her place in Caelin, then they leave quietly... and are soon back to their runaway status, due to their mysterious past and link to this mysterious group that is all about hunting them down, the Black Fang.
Class: Bard
Voiced by: Ayane Sakura (Japanese, Fire Emblem Heroes), Khoi Dao (English, Fire Emblem Heroes)
Wallace 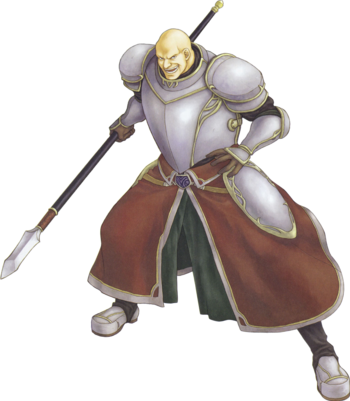 Crag of Caelin
A loud, brash, and powerful knight who was the long-time commander of the Caelin Knights. He retired some time ago to work on his farm, but Lundgren tried to rope him into his conspiracy to kill Lyn. Upon meeting her, though, he decides to do the right thing and stay with her crew...
Class: Knight, for all of ten seconds before you're forced to promote him in the Forced Tutorial, unless you're playing on Hard Mode or exploiting a particular glitch.