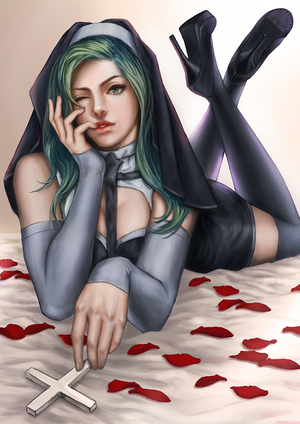 "Forgive me, Father, for I am about to do a whole lot of sinning."
Image

.
"Can you imagine all of these URLs aren't taken? verynaughtynuns.com, slightlynaughtynuns.com, nunscoveredinbutter.com... There's a whole untapped nun-fetish market out there! We need to get in on this!"
— Kathleen De Vere, LoadingReadyRun, Nuntastic

Nuns with bad habits (not usually that kind).

Nuns are women who have dedicated their lives to religious service, forgoing sex and material wealth. In the land of fiction, they complete the Fetish Trio right up there with Nurses and Maids.

There is just something about nuns that turns a lot of guys on. Maybe it's the mystery of it all. After all, they wear the elaborate robes and live in secret, away from men. Maybe it's the Forbidden Fruit factor: you cannot have them, so, ironically, they become more appealing.

If a nun is fetishized, expect her habit to be far shorter and tighter than anything you would see in a real convent. Additionally, most Nuns Are Mikos in anime. Church Militant nuns, by nature of not only being a nun but an Action Girl, have a tendency of following this trope as well.

Christian nuns are by far the most common in fiction, but there are Buddhist, Taoist, and Hindu nuns too. This trope actually dates back to Middle Ages, as the literature and songs of the time

often paint convents as "houses of vice" because it was, after all, a building full of women, making this one of the oldest sex and pornography tropes in Western history. (Indeed, in Elizabethan times, "nunnery" was slang for a brothel; thus, "Get Thee to a Nunnery" in Hamlet is a Double Entendre.) It was Truth in Television for many convents, and some of the greatest female saints are those who instituted reforms to make them true houses of holiness.

In medieval days, many women in convents were mere residents, not sisters. (This is alluded to in El Cid, where Ximene returns to her "home" convent, and the Mother says she's welcome, but shouldn't try to join up.) Noblemen often sent their daughters to convents by force, to keep them away from men until a suitable husband could be found; sometimes, no prospect would appear. Girls could also be locked up in convents if they had an inheritance coming, allowing the family to keep and control the money. Residents were usually allowed to have visitors, and thereby hangs the tale. There were plenty of priests who were Nun Too Holy, too. Let's not even get into the writings of sisters

who took the whole "marriage to Christ" thing pretty literally...

A Sub-Trope of Nun Too Holy. Distaff Counterpart of Sexy Priest.

Contrast Nuns Are Spooky and Nuns Are Funny.