Touch of Death
aka: Death Touch 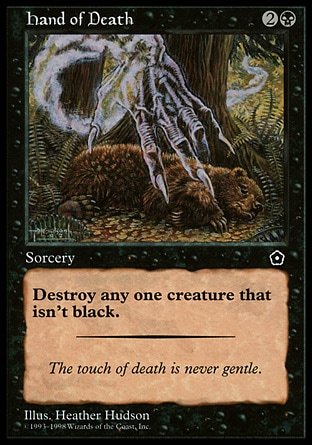 So... black bears must be immune to the hand of death? What do you know!
"A master of the Dim-Mak can poke an enemy in a certain spot and they die. It originated in ancient China when early man still had prominent off-switches located around the body, much like a modern lamp. Back then, you could kill a guy by selling him the wrong sized hat."
— Seanbaby, Cracked.com

A particularly subtle type of Dangerous Forbidden Technique, the Touch of Death allows its practitioner to instantly kill their opponent with extremely minimal force. This can be accomplished either with one touch at a specific point, or a series of precisely calculated strikes.

The victim often survives for a few moments, allowing for the drama quotient to be raised either by quiet resignation or desperate denial, sometimes while the killer describes in exacting detail what the technique is doing to the victim.

For the non-lethal version that renders an opponent simply immobile, see The Paralyzer.

A subtrope of the One-Hit Kill. Not to be confused with video game Collision Damage, which is often given this name. See also Finger Poke of Doom, Make Them Rot, Psychic Surgery and Poisonous Person. If a character with this ability is paired with the opposite ability, see Life/Death Juxtaposition.