Drowning My Sorrows
aka: Drowning His Sorrows 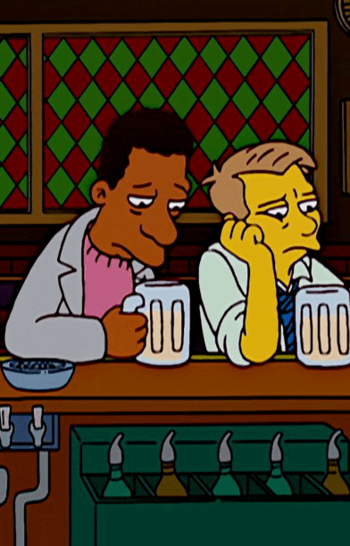 When one "Freaking Drink" isn't enough.
"When you drink like that, it isn't for pleasure. It's because your thoughts have become diseases. You do it because it's the only easy cure you can find."
— Ginn Hale, Wicked Gentlemen
Advertisement:

When characters get frustrated, they need a freaking drink. But when they are depressed, they get drunk.

A well-known Truth in Television. It is often played for sympathetic laughs, but it can also be dramatic, embarrassing or angsty, especially if it goes with Off the Wagon or in Real Life cases of alcoholism. A character who is usually very stoic or tough but turns into a pathetic drunk can be very pitiable, showing just how much they miss somebody, but be careful not to keep it going for too long or they may lose characterisation as a tough guy.

Characters who do this may also suffer from Past Experience Nightmares and are prone to not eating enough, and it might lead to spending the night with somebody as the next step in "healing".

Men who undergo this for a period often grow a Beard of Sorrow during the time. Their residences often show the Mess of Woe. If he never recovers, then he's definitely hopeless.

If a friend shows up, the Power of Friendship can convert this to To Absent Friends. If the depressed character recovers, it will probably lead to a He's Back! moment. Sometimes. If not? Time to throw him into a solitary confinement chamber.

The Alcoholic is an extreme consequence of this trope played straight for long periods of time. The Hard-Drinking Party Girl does this from time to time. Characters in a Sugar Bowl replicate this in a family-friendly way by getting Drunk on Milk And Ice Cream. See Drunken Montage, an older trope that pictures the character stumbling through the big city night. A nicotine addict reaches for the Cigarette of Anxiety.

For characters who can't do this, see Never Gets Drunk. Compare Drowning Our Romantic Sorrows.

As the goblins celebrate at your camp after siding with them in their raid at Silvanus' Grove, Shadowheart can be found getting hammered in a vain attempt to forget that she had taken part in the slaughtering of tieflings and druids at the grove.

As the goblins celebrate at your camp after siding with them in their raid at Silvanus' Grove, Shadowheart can be found getting hammered in a vain attempt to forget that she had taken part in the slaughtering of tieflings and druids at the grove.