The cast of Wadanohara and The Great Blue Sea.

Click here to see her in the first Normal Ending

Click here to see her in the second Normal Ending

Click here to see her in the True Ending

The protagonist of the game. A young witch charged with protecting the Sea Kingdom alongside her familiars. She is the only daughter of the Great Sorcerer, Meikai.

"...Wadanohara."
Wadanohara's first familiar, a shark boy. For unknown reasons, he left her side at some point in the past and now tries to force her out of the Sea Kingdom. Is the prime suspect of being the traitor in Blue Sea Kingdom.
Memoca

"The sea's so biiig!"
Another one of Wadanohara's familiars, a seagull girl. She has more of a temper and is prone to playing pranks.
Dolphi

"I'm hungry..."
Another one of Wadanohara's familiars, a dolphin girl. She is soft-spoken and afraid of sharks.
Fukami

"You like takoyaki?"
The last of Wadanohara's familiars, an octopus boy. He rarely smiles, but is fiercely protective of Wadanohara. 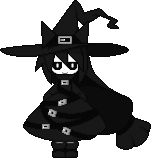 "Witches are good stuff!"
A senior witch dressed all in black who introduced Wadanohara to the Witch World.
Lobco

"N-no, lobster fry..."
Chlomaki's long-suffering familiar. Another denizen of the Sea Kingdom, the daughter of Cherryblod and Doloz.
Tatsumiya

"Lord Meikai..."
An oarfish mermaid who serves Princess Uomi. She was the familiar of Wadanohara's father and raised her after his passing.
Pulmo

"None shall upset the morals of this sea!"
A venus comb murex girl who serves Princess Uomi. Rather thick-headed and easily confused.
Princess Uomi

"....."
Daughter of the Sea God and ruler of Wadanohara's homeland.
Cherryblod

"The treasure must be there!"
A flapjack octopus girl and a resident of Wadanohara's town. Loves treasure hunting.
Creamil

"...Whatever."
A vampire squid girl and a resident of Wadanohara's town. Dislikes loud noises but doesn't seem to mind Minero's and Creamil's bantering.
Tomoshibi

"......zzzzzz"
An angler fish girl and a resident of Wadanohara's town. Follows Minero and her friends along, and is almost always sleeping.
Irena

"Oh, when's my sister coming back?"
A mermaid who lives in Wadanohara's town. She often sends Wadanohara on errands because she can't walk on land.
Miyura 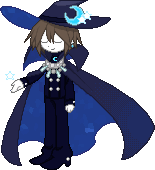 "...I pray for your happiness."
Wadanohara's deceased father, the Great Sorcerer.
Orca/Idate 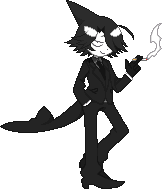 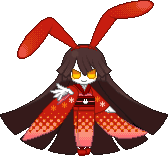 "My boning knife can and will cut anything!"
The princess of the Tosatsu Kingdom, which is invading despite a formerly friendly relationship with the Sea Kingdom. She serves as the main antagonist of the game who wants to kill Uomi.
King Artamos

"I'm getting up there in years..."
Princess Tosatsu's dad and king of the Tosatsu kingdom. A floating robotic rabbit head, currently travelling with his daughter.
Hofuru

"Orders, Your Majesty?"
A tanuki girl who serves the Tosatsu Kingdom.
Laurentia

"I want excitement! ♪ "
A demon mercenary hired by the Tosatsu Kingdom.
Vendetto

"I don't have a vendetta against nobody!"
A demon mercenary hired by the Tosatsu Kingdom. Is Ivlis' son and Poemi's brother.
Ver Million

"Any good work?"
A demon mercenary hired by the Tosatsu Kingdom and Wadanohara's friend.
Great Witch

Spoiler Characters/Denizens of the Sea of Death

to see his humanoid form

A white salmon shark who serves Princess Uomi. In actuality, he's the traitor, the Ambassador of the Sea of Death, and Samekichi's brother, and one of the two true main antagonists of the game. His real loyalty is to Princess Mikotsu.
Mikotsu

".....father."
Princess Uomi's sister, who began the Great War when the Sea King/God named Uomi his successor. She and her forces were sealed away by Meikai, but released by Sal.
Old

"Sigh..."
A bored young boy who died at sea. He has a fishhook embedded in his skull.
Stella

"Mheehee... ♪ "
A nautilus working for the Sea of Death.
Squid

"I'm hungryyy..."
A giant scarred squid who serves the Sea of Death.