open/close all folders
The Prophet
The player character. Because their home country of Nehrim is unbearable to live in, they decide to escape by stowing away on a ship with their best friend. But after being caught by the crew and having witnessed their friend die at the hands of the captain, (s)he is thrown overboard, but manages to survive and is washed ashore on Enderal.

Ultimately, it is revealed that the Prophet is a magical being created by the High Ones and is based on the person stowing away on the ship. The stowaway actually died after being thrown overboard, with the player character being a direct manifestation of the stowaway's unfulfilled desire to become something greater. To be someone who matters. This made them an ideal piece in the High Ones' game.

"It's the one universal rule that there is to this world - No matter how much you try to accomplish something… In the end, stupid people will destroy all you've achieved, with no more than a snap of their fingers."
A carefree mercenary working for the Order who encounters the player character when they are first stranded on Enderal. 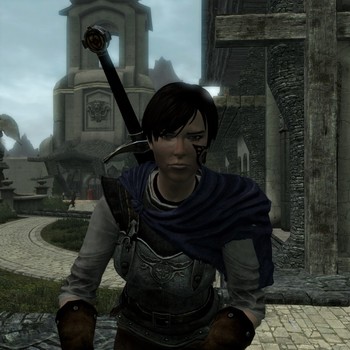 "So many people just talk, talk, talk, and never act. Because that would mean they'd actually have to endure something for what they believe in."

A soft spoken novice at the temple. She takes on her initiation ritual at the same time the player does. She has a dark entity living inside of her that wants to take possession of her body.

Later on, it has been revealed she is really Maya Dal'Galar, the daughter of a wealthy apothecarist. When she was a little girl, she died from an unknown disease. Her father, unable to let go of her, spent a fortune and destroyed his reputation trying to bring her back from the dead. He got his hands on one of the black stones and succeeded in resurrecting her, but the experiment was unstable and killed him. The Veiled Woman then renamed her Calia and brought her to a village, where she ultimately grew up into the woman encountered in the game.

The Holy Order
The religious group which makes up the ruling body of Enderal. 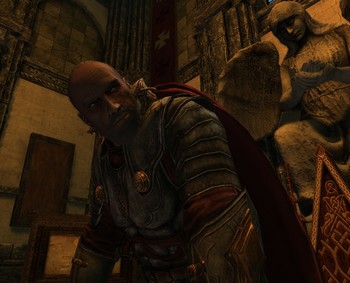 "I have made decisions driven by fear and selfishness before, and they were always wrong. I will not let that happen again."

The grand master of the Order and de facto ruler of Enderal.

The leader of a group of Nehrimese mages aiding the Holy Order and Jespar's employer.

A Qyranian arcanist working alongside Firespark. A very serious man who is not very keen on the Order and speaks to a voice in his head he calls Naea.
The High Ones 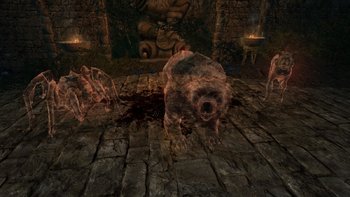 A race of evil godlike entities who are responsible for the Cleansing; an event that wipes out all sentient life on the planet.

Nehrim
The setting of the previous game and the Prophet's homeland. Since the death of the Lightborn, the country has been in a seat of turmoil as they bring spread their "enlightenment".

The leader of the Free People of Nehrim. He invades Enderal with the intent of making sure the Cleansing happens so humanity can evolve.
Spoiler Character 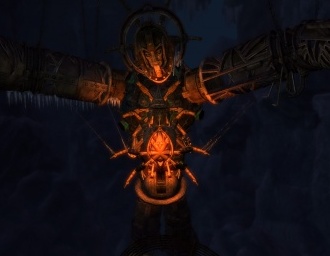 Widely considered as a myth to most of Vyn, the Black Guardian is revealed not to be a god or mythical creature, but a man from an ancient civilization trapped inside a colossal machine. He is the one who finally explains everything from the High Ones to the Prophet's true nature. 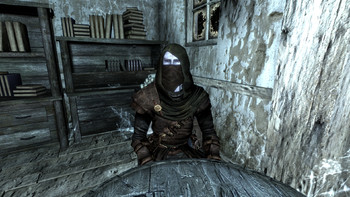 "Many things are horrible. Still, they happen."
A high-ranking member in the Rhalâta. Tharaêl contacts the Prophet in the Dust Pit for a mission to kill The Father, the leader of the Rhalâta.