Characters / The Rise of Kyoshi

The bridge between the human and the spirit worlds, charged with keeping the world in balance. The Avatar is the only one who can bend all four elements, and reincarnates through each of the four nations in turn. For tropes relating to other Avatars, see Aang, Korra, Roku, Yangchen, and Wan, as well as the Avatar in general.
Avatar Kyoshi 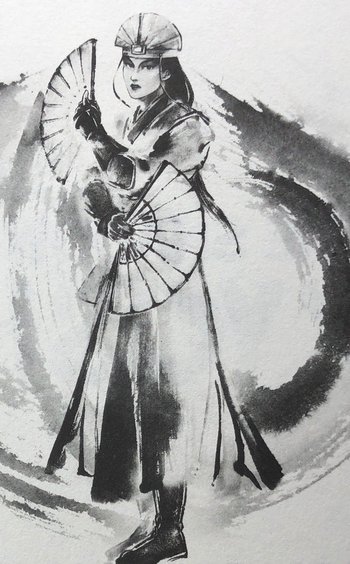 A servant girl for the Avatar Yun, who later finds out that she's the actual Avatar, and goes on a quest for revenge. Later in life, Kyoshi was the founder/creator of Kyoshi Island. She is best known as the creator of the Dai Li and the inspiration for the Kyoshi Warriors. She is also on record for the most triumphant demonstration of the power of the Avatar State, as she used it to alter plate tectonics.
Advertisement:
Avatar Kuruk
Kyoshi's predecessor, from the Northern Water Tribe. His early death, coupled with his friends' inability to locate his reincarnation, plunged the world into chaos.

For tropes pertaining to his appearances in the original series, see here.

Avatar Yangchen
The Avatar before Kuruk, an Airbender who is universally beloved across the Four Nations.

For tropes pertaining to her appearances in the original series, see here. 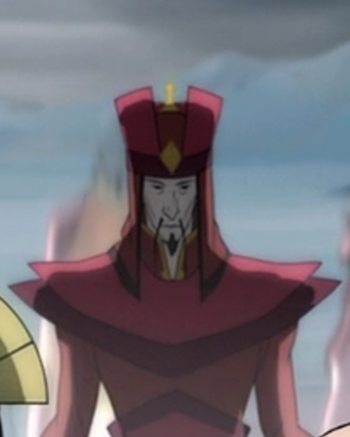 Szeto in his brief appearance in The Legend of Korra

The Avatar preceding Yangchen, a Fire Nation bureaucrat whose scrupulously ethical administration led to peace and prosperity for the Fire Nation.

A firebender who's close friends with Kyoshi and Yun, serving as the Avatar's bodyguard.
Yun

An earthbender who is believed to be the next Avatar, who's quick-witted and easygoing.
Jinpa

An Air Nomad who serves Kyoshi as her chamberlain and secretary. He often tries to nudge her into paying more attention to her political obligations, which is unusual for a supposedly-detached monk. His sky bison is named Yingyong.

A celebrated group of friends who taught Kuruk how to bend the other elements— just not how to be a mature, responsible Avatar. His mistakes and theirs overshadow Kyoshi's life.
As a Group
Jianzhu

A well-connected earthbending sage who has a lot of influence over the Earth Kingdom and other nations.

Avatar Kuruk's airbending teacher, who decides to take Kyoshi under his wing. His sky bison is named Pengpeng.

Rangi's mother. She resigned first her commission in the Fire Army to teach Kuruk firebending, and then quit her second career as Headmistress of the Royal Fire Academy for Girls to teach Yun.

Mutually disliked by Kuruk's other friends for being a bad influence on him, Nyahitha is a former Fire Sage of the Bhanti tribe.

A self proclaimed Queen of Pirates from the Southern Water Tribe who raids and fights anyone in her way. She leads the Fifth Nation, a well-established and ruthless clan of pirates whose recent criminal activity along the Earth Kingdom's coasts has aroused the awareness of Jianzhu and his cohorts.

A daofei group formerly led by Kyoshi's parents. Their name comes from how they make themselves up to look like performers, and the fact that they're usually traveling by sky bison. Their signature move is called "dust-stepping," Earthbending such tiny fragments that they can walk across the sky, almost. Kirima, the Waterbender, has a variant called "mist-stepping," using tiny jets of water. When they're all Kyoshi and Rangi have, they become Kyoshi's bending masters.
As a Group
Jesa & Hark

Kyoshi's parents and founders of the Flying Opera Company, who abandoned Kyoshi in Yokoya when she was young.

An elderly earthbender who harbors dark secrets. He becomes a mentor to Kyoshi when she uncovers his true nature.

The highest-ranking member of the Autumn Bloom.

A high-ranking member of the Autumn Bloom daofei band.

Leader of the Yellow Necks, one of the largest and most dangerous bands of daofei in history. He considered himself the protector of the world... meaning the world owed him for allowing it to exist. He is thought dead at the start of the story.

One of the richest men in the Earth Kingdom, and Jianzhu's mentor.

Jianzhu's rival among the Earth Sages. Most of his energy is devoted to contradicting him.

Zoryu's illegitimate older half-brother. His mother was important enough that the Fire Lord was forced to acknowledge his existence, but he was very deliberately not the heir.

The mistress of the previous Fire Lord, mother of his eldest son, and head of the Saowon clan. She uses politics to undermine the current Fire Lord in an effort to gain more power for her clan.

Ostensibly hired by Jianzhu to be Yun's Waterbending master, his past is mysterious... and sinister.

Amak's sister. A master healer of the Northern Water Tribe, she saved Hei-Ran with both her waterbending and her friendship.

Alternative Title(s): The Shadow Of Kyoshi, The Rise Of Kyoshi Avatar Kyoshi