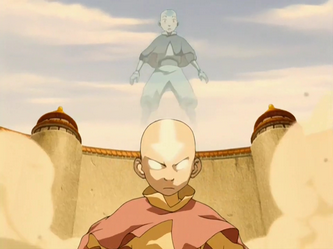 A projection of Aang looks on as his body briefly loses itself in the Avatar state.
"I want my father not to think I'm worthless."
— Zuko
Advertisement:

Aang and his friends rest at Earth Kingdom Outpost after their journey from the North Pole. They are to be escorted to Omashu, where Aang intends to find King Bumi to teach him earthbending. But General Fong, inspired by Aang's battle-determining actions during the Siege of the North, suggests that Aang defeat the Fire Lord and end the war immediately by triggering the Avatar State. In the meantime, Zuko and Iroh are visited by Zuko's sister, Azula, who has come bearing a message from the Fire Lord, requesting their return home. After many failed attempts, the General finally succeeds in triggering the Avatar State by faking Katara's death. Aang nearly destroys the base in anger but is then told by Avatar Roku that if he is killed in his Avatar State the Avatar Spirit will cease to exist. The group decides to go to Omashu alone. Zuko and Iroh are just about to board Azula's ship when a Fire guard accidentally lets slip that Azula's summons are a ruse in order to imprison them. They escape however, but are subsequently forced to become outcasts, realizing that they are to become fugitives of the Fire Nation after Iroh's treacherous saving of the Moon Spirit at the North Pole, and Zuko's failure to capture the Avatar.

Oh yes it did.

Oh yes it did.