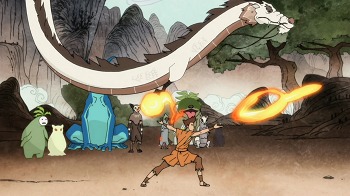 Go back. Return to the beginning. Find Raava.

After falling unconscious on the beach, the Fire Sages carry Korra to the temples where they reside. There, the shaman uses firebending to read Korra's energy, and concludes that she is infected with a dark spirit who would consume the Avatar Spirit if it was not cleansed in time. The shaman orders the sages to lower Korra into subterranean spirit waters, where she reconnects with her spirits, as well as four of her past lives: Aang, Roku, Kyoshi, and Kuruk. The past Avatars attempt to remind her of who she is, but she is unable to remember, prompting a young man to appear behind her in an orb of gold light. She asks him if he was the spirit Raava, whom she was told to find; the man said that he is not, but that assures Korra that he can aid her in finding Raava, before introducing himself as Wan, and recalling how he became the first Avatar.

Wan shows Korra his life, starting with his stealing food from the Chou brothers to feed himself and his friends. He successfully evades his pursuers for a while, but the brothers eventually catch up to him and subsequently throw him into a pen with hybrid pigs. Wan returns to his treehouse, bringing Yao and Jaya what little food he had managed to salvage in his tunic. He laments over their impoverished lifestyle, wishing they could live like the Chous. Jaya cautions him against stealing from the Chous again, fearing he would wind up dead, or rather banished into the Spirit Wilds. Despite Jaya's attempt to convince Wan that some people, like them, were simply born without power, Wan seems only inspired to develop a plan to obtain power.

In the city, a group of hunters prepared to journey into the Spirit Wilds in order to collect food, knowing that the local lion turtle would grant them the element of fire to protect themselves against wild spirits. Wan immediately volunteers; however, after receiving the ability to firebend, he feigns fear and is told to return the power of fire to the lion turtle before returning to the city. Wan returns to the city without returning his bending, and shows his ability to Yao and Jaya back at the treehouse.

That night, Wan leads his brother and several other citizens on a raid of the Chou estate. To allow the others sufficient time to escape, Wan battles the Chou brothers and the palace guards, and is unmasked during the altercation by one of the Chous. Hesitating to kill the smallest of the Chou brothers, Wan is apprehended and brought before the lion turtle. Refusing to reveal the names of those involved in the raid, Chou the Elder banishes Wan to the Spirit Wilds and orders him to give back the ability to bend fire to the lion turtle. However, Wan pleads with the lion turtle and convinces the giant beast to allow him to keep his firebending in order to survive the wilds.

As he wanders the Spirit Wilds, Wan encounters several hostile spirits, forcing him to remain awake until he eventually collapses from exhaustion. However, vines sprout up from the ground beneath him and starts to pull him in. Before being engulfed completely, Wan uses his bending to propel himself back to the surface. Although exhausted, he decides to venture onward until he comes across a tree carrying strange fruit. He plucks one of the fruits and attempts to eat it, but is surprised to find the fruit is actually a swarm of wasps that promptly attack him. In his attempt to flee the swarm, Wan inadvertently falls off a cliff.

As he lands, he finds himself looking at an oasis with trees bearing actual fruit. Still hungry, Wan approaches the island, but before he could reach it, an aye-aye spirit appears and tells him that, being a human, he is not welcome at the oasis. Wan tries to reason with the spirit, telling the entity that he was hungry and in need of sleep. The spirit refuses to listen, prompting Wan to attempt firebending to force the spirit aside. The spirit easily evades the attack by teleporting behind him and proceeds to shove him to a nearby bush. Shortly after, a procession of spirits approaches the oasis. In a final attempt to enter the oasis, Wan disguises himself as a bush spirit and briefly manages to fool the oasis guardian; however, he is stopped by the aye-aye spirit, who recognizes his distinct human scent. The spirit guardian orders Wan to return home once more, and he reveals that he was banished, causing one of the spirits to suggest moving to another lion turtle city. Wan expresses disbelief at the thought of other lion turtles, and inquires as to where he would find one. The aye-aye spirit refuses to help him and Wan stalks off in frustration.

While traveling through the wilds, he spotted a cat deer caught in a net. He initially decides to have the creature for dinner, but ultimately chooses to help set it free. Before he could release the animal from its restraints, the group of hunters Wan was initially supposed to accompany show up. To protect the cat deer, Wan fights the hunters and leads them away from the creature, using the forest's own hazards to his advantage. Though he manages to stop two of his pursuers, Wan is eventually chased down. Before he could be apprehended, however, the aye-aye spirit appears and possesses one of the hunters, prompting the other to flee in fear. The oasis guardian then carries Wan to the oasis, and allows the spirit waters to heal his injures. Deciding that he has had enough of humans, Wan resolves to stay in the wilds to learn the ways of the spirits.

As time passed, Wan befriends the spirits and learns the Dancing Dragon form from a white dragon, mastering the art to the point where fire became an extension of his own body. In doing so, he dramatically improved his firebending skills and managed to drive off any hunters that trespassed in spirit grounds. Eventually growing restless, Wan decides to leave the oasis with the company of Mula, in order to travel the world and find the other lion turtle cities.

After wandering across many different terrains, Wan and Mula run across a large group of spirits running away from the all-powerful spirits, Raava and Vaatu, who are battling in a nearby valley. Wan goes to investigate, and attempts to stop the fighting in order to protect the spirits and animals in the surrounding forest. Vaatu manipulates Wan and tricks him into using his fire to separate Vaatu from his counterpart, Raava. Raava then informs Wan of his mistake, telling him that Vaatu is the spirit of darkness and chaos and she, as the spirit of light and peace, had kept him under control for the past ten thousand years. Wan also discovers that the human and spirit realms are now headed toward annihilation because of his doing.

Back in the present, Korra vocalizes her success in finding Raava.