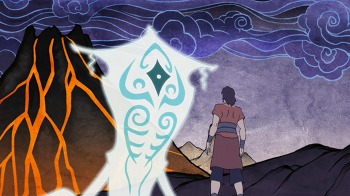 We are bonded forever.

Korra, still submerged in the subterranean pool of spirit water, became the topic of discussion as one of the Fire Sages question if she should be pulled up, to which the Shaman responded that she is connecting with her deepest Avatar memories and that she must confront her own past. Korra returned her attention to Wan's story, where he was debating with Raava about humans' interference with spirit matters.

Later, Wan discovered some people with the ability to airbend, and was thrilled to see other humans for the first time in two years. Frightened, the airbenders fled and Wan tried to follow them until he approached a cliff which he could not traverse. He noticed one airbender running toward him, but was surprised when he saw the nomad floating towards a lion turtle that was floating in the air. Wan eventually made his way onto the lion turtle and introduced himself to the Nomads. Vaatu gained control the spirits on the island and began to terrorize the inhabitants, before revealing his presence, which the airbenders questioned due to the absence of Raava. Wan tried to fight off the spirits with firebending, when Raava arrived. After gloating how he would destroy Raava, Vaatu fled with the dark spirits. Confused, the people living atop the air lion turtle asked why the spirits attacked. Wan explained himself and resolved to beat Vaatu by asking the lion turtle to grant him the power of air. Initially, the lion turtle declined but Wan was determined to undo the damage he had done. The lion turtle agreed to grant Raava the ability, who would pass it to Wan when he was ready.

Raava warned Wan that every time Vaatu gained power, her strength waned, and she goes on to say that in one year, the Harmonic Convergence will occur and Vaatu will destroy everything around them. During the next year, Raava helps Wan master firebending and airbending as well as water and earthbending. Near the end of the year, Wan and Raava found a ravaged section of forest; it was discovered that Wan's friends had left their city to create their own but were being attacked by spirits. Wan recognized several of the spirits from the oasis but they were soon corrupted by Vaatu, forcing him to fight them off with Raava. He ultimately fails in the attempt, and all the humans are wiped out by Vaatu's forces.

Raava, in a severely weakened state, asked Wan to travel to the southern portal for the convergence. In the final battle with Vaatu, Wan is severely beaten despite his bending abilities and fusing with Raava. Though her presence puts a great strain on his body, Wan refuses to give up. As the convergence begins, Wan, in a desperate gamble, touches the southern portal, absorbing the energy, permanently merging himself and Raava into one entity, creating the Avatar Spirit. After beating back Vaatu and imprisoning him with all four elements inside a tree, Wan makes it his mission to bring peace to the world while acting as the bridge between spirits and humans to avoid another disaster. To do so, he has all of the spirits leave the material world, and return to the spirit world, at which point he closes the spirit portal to ensure no human would be able to physically enter the Spirit World and free Vaatu.

Many years later, an elderly Wan, seconds away from death, is seen laying amidst a war-torn battlefield. He laments that despite all his best efforts, chaos and destruction still exist in the world even with Vaatu locked away. Raava tells him that she will always be with him for all his lifetimes. Wan then passes away and the Avatar cycle begins.

After this, Korra awakens with her memory intact and the elderly woman asks her who she is. Korra replies that she is the Avatar and knows what must be done. The head sage takes Korra outside to a herd of sky bison that were saved after the Hundred Year War. Korra is gifted one and flies back towards the South Pole with the knowledge that Harmonic Convergence will occur in only a few weeks.