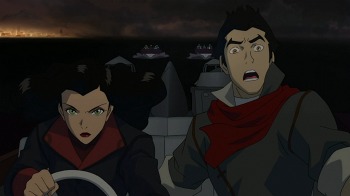 I'm not giving up on you.

A Future Industries shipment is stolen by unknown assailants who possess the same remote-detonated bombs possessed by the people who attacked the cultural center, and once again, the North is believed responsible. Asami is upset, as her company is now on the brink of collapsing.

At the southern portal, Unalaq emerges from an unknown venture to meet with his children, who report that Korra has been killed by a Dark Spirit, to Unalaq's shock.

Meanwhile, Bolin is starring in Varrick's movers as "Nuktuk, Hero of the South", a swashbuckling southern Waterbender who fights the evil Unalaq. The fame has gone to Bolin's head, and he tries to force a relationship on his costar Ginger. The films are successful, however, and Varrick intends to keep rolling them out.

Mako is derided by Lin, Lu and Gang for believing the culprits of the Future Industries thefts to not be from the North, and the captain of the hijacked ship does not recognize the bomb recovered from the cultural center bombing. Mako suggests a covert operation to find the culprit, but is shot down by his commanding officers.

Knowing his job is on the line, Mako tells Asami that he will set a trap for the thieves with a decoy ship provided by Varrick and then capture them. When Bolin is unwilling to help, Mako recruits his former comrades, the Triple Threat Triads, promising that Korra will restore Amon's victims' bending. However, during the operation, the Triads turn on Mako and Asami, having been hired to keep the two distracted, and the duo narrowly escape.

To Asami's despair, she finds that her last warehouse has been completely picked clean by the thieves while they were away. Asami declares herself ruined, but Mako promises not to give up on her. Asami responds by somberly kissing Mako, to their confusion. Mako learns that the Triads were hired by an extremely wealthy individual, and on the set of Nuktuk, finds the pyrotechnics are the same as the bombs used by the thieves. Mako runs to Varrick's office, where Asami has just finished signing the papers to allow Varrick to buy out Future Industries. Varrick's smug smirk clicks everything into place — Varrick has been purposely stealing from Future Industries to drive Asami to sell him her company out of desperation, but Mako is silent for the moment.

On a distant island, the Fire Sages discover Korra has washed up on their beach, but she has lost her memory.