A list of characters from Final Fantasy Tactics A2. Some spoilers are unmarked.

The protagonist of the game, an orphan raised by his aunt and a troublemaker in school. He gets put in detention the day before summer vacation and finds a strange book in the library, which naturally transports him to Ivalice. Unlike Marche, Luso is much more adventurous and not especially eager to get back home, which is handy because he needs to fill his Grimoire end-to-end in order to return. 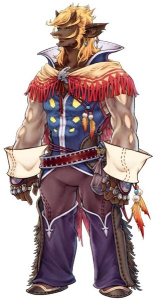 The leader of Clan Gully. When Luso lands in the middle of their hunt, Cid offers him the clan's protection so the kid won't be killed by a giant chicken-bowling ball hybrid. Cid is competent, world-wise, and good-natured, but he hasn't always been an innocuous clan leader. 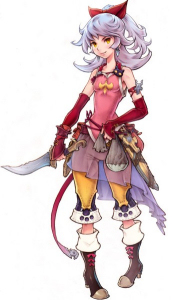 A notorious hunter with a reputation as a loner. She poaches a kill from Clan Gully, falls into a trap set by Cid and Luso later, and soon after that forces her way into the clan in the hope of more profitable ventures. Needless to say, it's a rocky relationship. 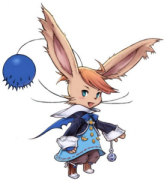 Montblanc's younger brother and a Moogle bard who enlists Clan Gully's help in procuring materials for a splendid new musical instrument. He repays them by giving his services to Clan Gully and composes a song about Luso.
Advertisement:
Secret Playable Characters 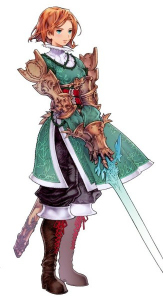 A former Blademaster who roamed Jylland with her partner Luc Sardac. She was renowned for her swordfighting skills. Unfortunately, she seems to be in less than stellar condition these days. 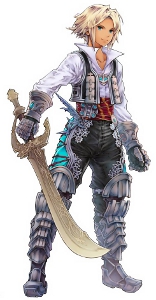 The same fellow from Final Fantasy XII and its sequel. Vaan and Penelo return here as a sky pirate pair and have several encounters with Clan Gully before joining it. 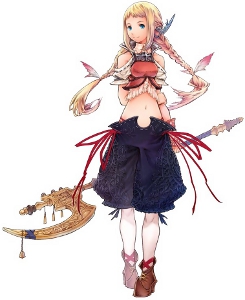 Vaan's partner as a sky pirate, who as usual has to keep him grounded (so to speak) in the land of common sense and rationality. She eventually joins the clan along with Vaan. 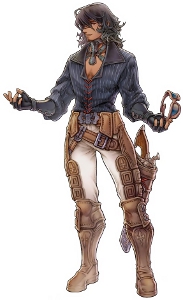 The man from Rozarria. His behavior towards the player characters is markedly different in this game than in Final Fantasy XII. He uses Luso and Clan Gully mainly as couriers. Everything is on a need-to-know basis, and Luso isn't on that list. 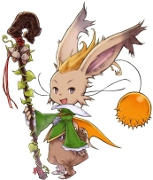 A good-natured moogle traveller. He left Clan Centurio in order to search for the Gigas Pendant.
Non-Playable Characters 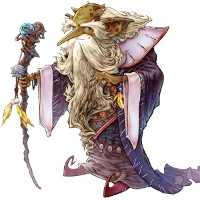 A very ancient old Rev who lives in a cottage up in the mountains and knows a lot about most everything. 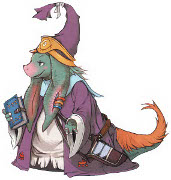 An eccentric Nu Mou inventor and scientist who charges ridiculous prices for his merchandise.

The school's librarian. Yes, his first name is Mewt.
Villains 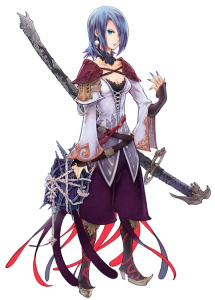 The Big Bad of the game and the leader of the crime syndicate Khamja. Like Luso, she possesses a Grimoire. She has a grudge against Cid, but her motivations and goals are unclear.

Illua's right-hand man. He's sent out to do her dirty work and occasionally observes during certain quests, alerting you to the fact that Khamja has a hand in this.

Some kind of semi-solid purple... entity... from another dimension. Nobody who knows about it wants it in Ivalice for very, very good reason.
Rival Clans

Khamja is a crime syndicate that operates out of Graszton, and the main antagonistic force of the game. Officially, they build and sell ships. This is a from for a great many illegal activities committed across Jylland. Illua is their leader, Ewen is a high-ranking member and Cid is a former member.

Duelhorn is a crime syndicate from an unspecified distant land that seeks to extend its grip over Jylland. Technically, they are not a clan at first, calling themselves a "war-band," but acclimate to Jylland's culture pretty rapidly. Over the course of the game, rivalry with the much more villainous Khamja for control over Jylland leads them into an Enemy Mine situation with Clan Gully.

A small, elite clan of four pursuing Klestia, the monster you encounter in your first battle, led by a Fighter named Bowen. You help them pursue their vengeance against the beast and also introduce them to Veis, an assassin who wishes to join them, teaching you her class in the process.

A clan/band of four Idol Singers — two Viera and two Gria. They have a large, popular following and even have two perpetual Fanboys following them around. They also happen to be pretty skilled warriors.

A minor, all-Seeq clan based around Grazston who are Exactly What It Says on the Tin. You butt heads with them a few times over the game, and their leader, Lord Grayrl, will teach you the Viking class after one encounter.

A minor, all-Seeq clan based out of Zedlei forest who raise malboros and flans for the "produce" they can gather from them.

Two rival clans from neighboring villages in the Rupee Mountains that have had a violent feud for years and years. Both sides will post bills requesting aid in settling the score once and for all, and both sides pride their strengths (physical and mental, respectively) while denigrating their opponents corresponding weakness. The leaders of both factions will teach their jobs to you (Arcanist and Cannoneer) when you answer a bill requesting supplies.

A clan that acts more like bandits than anything else.

An all-Bangaa clan of blacksmiths. They are just as good at using their weapons as they are at crafting them.

A clan of sailors operating out of Graszton.

A group of people that possess supernatural abilities. They are not a formal clan; very few of them actually work together, and the exact number of them is unknown. Several are encountered during the Heritor quest line.
New Classes

A Hume-exclusive class, they very much resemble samurai in both attire and choice of weaponry. They're the polar opposite of Paladins in that they're designed to dish out as much damage as possible while taking little in return.

A new class for the Humes, it is a stronger variation of the White Mage that uses High Magick and wears the Cat-Eared Hood typically belonging to the Devout class in previous games.

A new class for the Viera, it focuses on buffing allies and weakening enemies with a variety of status effects. As their name implies, they wear green and wield Green Magic.

A new Viera job that specializes in inflicting status effects onto enemies with their enchanted rapiers using their Blade Arts skill.

A new class for Bangaa, which wields massive cannons to specialize in ranged attacks.

Another new class for Bangaa, these fighters wield cards to attack from a distance and deal devastating status effects.

Another new class for Bangaa, an evolution of the White Monk delivering even more powerful punches.

A new class for the Nu Mou, a powerful magick using class that wields rods.

Another new class for Nu Mou that inflicts magickal damage to all units on the field, disregarding whether they are friend or foe.

A new Moogle job, Chocobo Knights have no innate abilities of their own, and instead change their move set depending on what color chocobo they mount. They can, however, wield any non-ranged weapon type.

Another new Moogle job that can wield hand cannons. Unlike the similar Bangaa job Cannoneer, Flintlocks must "prime" their cannons before using any abilities, though they have powerful support capabilities.

One of the primary Seeq jobs, focusing on dealing massive damage and destroying the target's armor.

Another primary Seeq job, this fighter focuses on laying traps and using items to harry their enemies.

A secondary Seeq job specializing in various skills, from support to absorption and dealing heavy damage at the expense of their own health, making them the class in this game most similar to the series' standard Dark Knight.

Another secondary Seeq class that uses axes in and lightning magic in battle.

A secondary job available to the Gria, which enables them to use Geo Effects depending on the type of terrain on which they're standing.

Another secondary class available to the Gria, it is generally regarded as an improved version of the Soldier and Warrior jobs.

Another secondary class available to Gria. They specialize in brutal physical damage with their Feralism abilities and wield greatswords.
Advertisement: