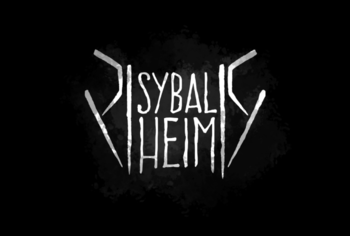 In a city of eternity, conflict has bubbled slowly, but is destined to come to a head.
Will you fight to protect your home and the people there you care for?
Will you crumble the city walls and escape an eternal prison?
The choice is yours to make.
— Tagline
Advertisement:

In a world much like our own, a magical forest has appeared to individuals in times of intense desire all throughout history. Should they choose to step through it, they arrive in the city of Sybal-Heim, populated by others that have made the same choice. Apart from the wide array of peoples from across the globe, split geographically into five districts, the most notable features of the city are as follows:

1. Each night, every person transforms into their sybal, an alternate form that is a manifestation and symbol of their innermost traits and desires, and

2. This nightly transformation completely halts the aging process, resulting in a population of ageless immortals.

For some this is paradise, for others a living hell. But once you have entered the woods, leaving does not seem to be an option, as they shift and turn so that all paths lead back to the city again. The city’s god-like ruler, Basileus the Organizer, has made his domain a prosperous one, but many suspect that he hides secrets. Capital crimes like treason or murder are met with a sentence to Kardia Manor, where most are never heard from again, and those that return come back… different, and unwilling or unable to describe what happened within. After nearly 4000 years of relative peace under his rule, the struggle between his leadership and the underground resistance begins to escalate in 1891, and civil war looms on the horizon.

is an online role-playing group created by Anna Earley and hosted on DeviantArt. Set in the titular immortal city, members are split between Disciples, those loyal to Basileus, and Insurgents, those opposed. The story uses a self-described "choose-your-adventure book" style plot progression, where these factions compete to earn points, with the winner of each event impacting the direction the story takes. It is still actively ongoing as of 2019, with the 4th round beginning in August 2019.