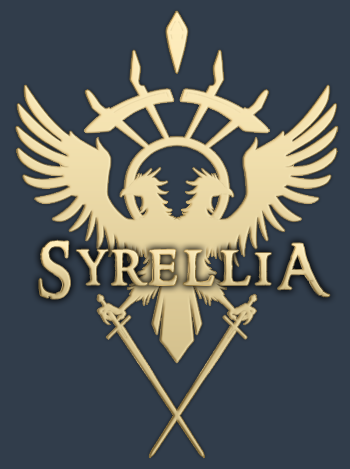 Syrellia is a roleplaying group located on DeviantArt. Based in the chaotic fantasy world of Litvantar, as citizens of Syrellia, the capital city of the Republic of Melssentenia, players must uphold the honour of the city and permit it to rise to power to be recognised by other civilisations in the region.

The roleplay is based off a Massively Multiplayer Online Roleplaying Game style, with RPG Elements such as Classes and a preset plotline with optional side stories and NPCs. It follows a main plot in which Syrellia becomes involved in chaotic and epic events that could possibly change the world for the worse if the city does not intervene or the players do not make the right decisions.

Syrellia is based on the concept of a city that is part of a revolution for "technology" development in Litvantar that goes past beyond the most basic form of magic (known as Deeper Magic). The three Technologies that the city has chosen to research are Magitechnology, Natural Magic (or alternate forms thereof) and Industrial. Players must choose a Technology, live in the district that supports it, and contribute to the development of their chosen Tech over the course of the story.

The group can be found here

, and its wiki, The Tome of Litvantar

can be found here. On October 19 2013, Syrellia announced the Long Sleep

, in which it finally closed down after several years of running.