This page here records the characters of the Syrellia roleplay.

open/close all folders
The Technology Leaders 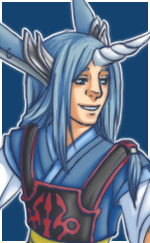 The Technology Leader of Sinkamma, Marc is a forest unicorn hailing from the Islands of Rinmoria. He was formerly the Commander of the Technorangers' Guild in the district before he was elected to take the place of Leader after Episode Seven. He's renown for introducing elementology to Syrellia and promoting summoning magic to its current status in the district. As of now he oversees the running of Sinkamma, and in his free time works with the elementologists and researchers in the district. Very well-known for being the master of Artemius de Larune, the spirit of an old rapier and his Summoner's Avatar.

As of Syrellians Abroad, he is a Summoner.

The Technology Leader of Talathir and a thunder dragon from the Einlor Mountain range. Her species is known for their innate ability to control lightning and their lack of wings. As Moon Warden she oversees the magical research in her district and keeps in contact with the Neruthis Empire and the city of Isillith, both of which are centres of the study of magic. Currently she spends time making sure Mother Nature is appeased as well as protecting the earth, and taking care of her children.

As of Syrellians Abroad, she is an Elementalist. 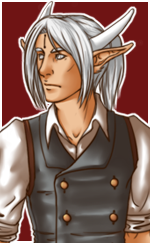 A Kushalyur demon born without wings and magic due to genetic defects from Talathir, Halyan was gifted with silver eyes - considered the mark of great talent in his society. His affinity soon turned out to be machinery, and he left Talathir for Illudois where he was eventually chosen by the district to become the Technology Leader of Illudois. He is known to be a good engineer and aviator, and is particularly skilful with engines. He often corresponds with the dark elves in the Empire of Morragane for their help on machinery, and for knowledge on how to build the first airship of Syrellia. The Principle Shaman Nessair Kerre is his father.

As of Syrellians Abroad, he is a Gunslinger. 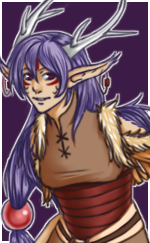 A qilin from Rinmoria, Shen came to Syrellia as an apprentice shaman under Principle Shaman Nessair Kerre. After the events of Syrellia Rising, she decides to work in Syrellia for her overseas experience, as her culture encourages it. She is a Druid as of Syrellians Abroad.

A flamboyant skirmisher peacock who, while in general dislikes fighting, will take up arms to deal with it. He works as a shopkeeper when he's not fighting.

Played by: Arc and May

The three children of Halyan and Sieo. They're often sighted usually as background characters or both parents having to deal with them while working, but sometimes they interact with the other Syrellians. Unlike their father, all three have magic; however, Arkahn seems more interested in machinery than he is in magic and may be following his father to Illudois one day.

All three were born on the same day. Arkahn is the oldest, followed by Inthi and then Aravell.