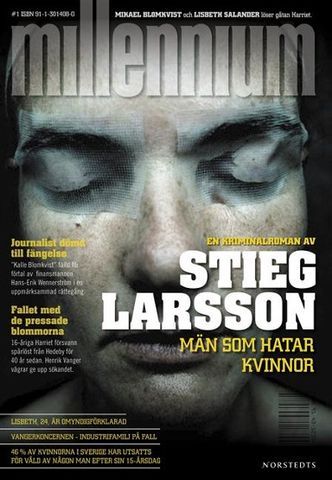 Original Swedish language cover of The Girl with the Dragon Tattoo.
Advertisement:

Millennium is a series of crime fiction/psychological thrillers/dark conspiracy books by the late Swedish author Stieg Larsson, which have won several awards and international acclaim. It was originally called "the Millennium Trilogy", despite not being meant to be a trilogy. Larsson died before the first book saw publication, and he had completed two more books at that time. Rumors say he planned as many as ten books with the characters from the trilogy. These books became bestsellers in their home country, due in part to their international attention.

The Girl with the Dragon Tattoo begins with middle-aged reporter Mikael Blomkvist sentenced to prison for libel. While Blomkvist waits to serve his term, famous industrialist Henrik Vanger hires him to investigate a forty year old cold case: The disappearance and presumed murder of his then 16-year-old grandniece, Harriet. Blomkvist's investigation brings him into contact with Lisbeth Salander, the antisocial, borderline disturbed, and brilliant researcher who Vanger hired as a private investigator to do a security check on Blomkvist. Salander dislikes authority and violently opposes any form of abuse against women, and when Blomkvist comes to her for help in his investigation, she becomes his unlikely aide as they zero in on the truth behind Harriet's disappearance, which appears to involve a serial killer and rapist...

The Girl Who Played with Fire has Blomkvist aiding two intrepid journalists who are researching the Swedish sex trafficking industry, which is linked to a mysterious criminal boogeyman known as "Zala". After the researchers begin digging more deeply into Zala's identity, they are found slain in their home, with Salander's prints on the murder weapon. While Blomkvist tries to track her down and discover the truth, Lisbeth herself begins a campaign against Zala, intent on revenge for more than just the researchers...

In The Girl Who Kicked the Hornet's Nest, Blomkvist discovers that a shadowy faction within the Swedish Security Service have manipulated the traumatic events of Lisbeth's past, including her history with the mysterious "Zala", and will stop at nothing to hide their decades-old deeds. Lisbeth's latest actions threaten to bust the conspiracy wide open, so the faction moves to clean up all evidence of their misdeeds — including Lisbeth herself...

Several years after Larsson's death, the publisher hired author David Lagercrantz to write more books in the series, which are entirely Lagercrantz's own invention without any inspiration from Larsson's plans.

The Swedish film adaptations, released starting in 2009, became huge successes in several European countries; with an all-star cast and a Danish director, Men Who Hate Women became the most-viewed Swedish film ever in several countries. (All three films eventually came into The United States via DVD and Blu-Ray releases, and all three featured their English language titles.)

An American adaptation of Dragon Tattoo saw release in 2011; David Fincher directed, Steven Zallan wrote the screenplay, and the team of Trent Reznor and Atticus Ross handled the music. The cast for the film included Rooney Mara as Lisbeth and Daniel Craig as Mikael. Though plans for a sequel were discussed, Mara and Craig ultimately did not return to their roles. The following film adaptation was 2018's The Girl in the Spider's Web, with Claire Foy as Lisbeth and Swedish actor Sverrir Gudnason as Mikael.