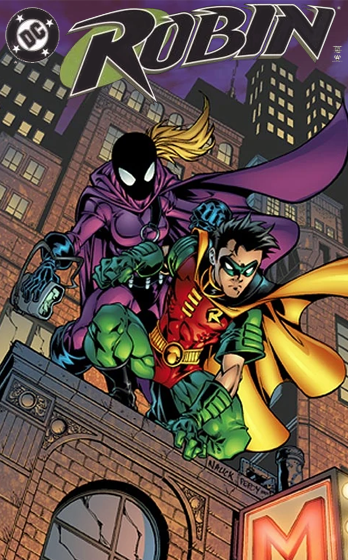 In 1993, after the success of three separate miniseries chronicling Tim Drake's tribulations as the third Robin, (succeeding Dick Grayson and Jason Todd), Tim was given his own monthly ongoing series that began in 1993 and ran for more than 15 years, until it ended in early 2009. The series is notable for depicting Tim's personal life with his family and friends, and him balancing a delicate act between his superhero and civilian identities. The first 100 issues of the Robin series were written by Chuck Dixon, who had written the preceding miniseries. During Dixon's run, the series was acclaimed for a high-profile Teen Pregnancy arc involving Tim's love interest Stephanie Brown a.k.a. Spoiler. In 1998, Wizard magazine ranked the series as the best ongoing comic book of the year. Following the Batman: No Man's Land crossover event, Tim was sent away to boarding school at Brentwood Academy.

Chuck Dixon left the book in 2002 and was first replaced by Jon Lewis, whose run as writer began with Tim moving from the suburbs into Gotham City itself after his family lost most of their savings. Lewis had fondness for writing slightly sci-fi plots, which was jarring in a Bat-book that had focused more on street-level crime; his run also built a stable relationship between Tim and Stephanie.

The next writer was Bill Willingham, who forcibly retired Tim from being Robin after his dad found out his secret. Stephanie briefly replaced him as the new Robin, before being fired by Batman and then killed off in the War Games crossover. Afterwards, Tim left Gotham for a while and temporarily stayed in Blüdhaven with Cassandra Cain.

Adam Beechen took over the series at issue #148 for the "One Year Later" relaunch, and had Tim now officially adopted as Bruce's son and once again working in Gotham as Batman's partner. Chuck Dixon briefly returned the series for issues #170-174 to resurrect Stephanie Brown, but was promptly fired and replaced with Fabian Nicieza, who wrote the last arc in the series before it was cancelled in the wake of Batman R.I.P. at issue #183.