Characters / The Outer Worlds The Crew

A Ragtag Bunch of Misfits led by The Unplanned Variable. Whether they be good, evil or something else entirely is left open to the imagination. 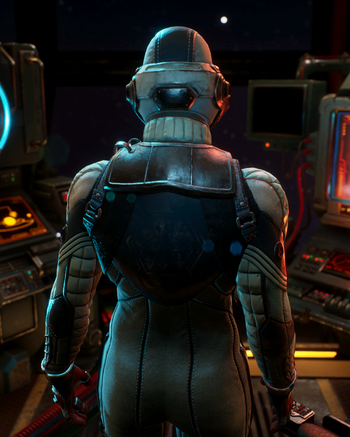 The Unplanned Variable as pictured in the Modular Epilogue
"Look who it is: The Stranger who came out of nowhere, and now has everyone talking. Some people want you to be a savior, a shining beacon of hope. Those people clearly haven't met you yet."

The main protagonist cryonized and later left abandoned along with the other passengers of the drifting colony ship The Hope.

We'll see the bright and hollow sky, We'll see the stars that shine so bright
The many disparate people who can join you on your journey.
Ellie 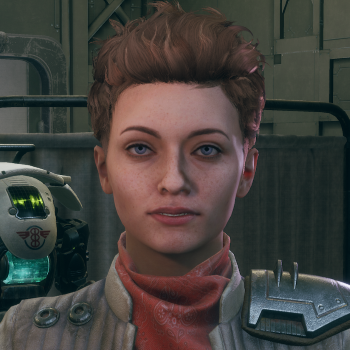 If I'm being honest — and I prefer not to — I was about ready to pick up another contract anyway.
Voiced by: Victoria Sanchez
"I'm a surgeon by training and a pirate by inclination. Not much else to know, Captain. I like long walks on the Promenade and the smell of Spacer's Corona. I make a mean Zero Gee Cocktail, and I've got a meaner right hook."

Space pirate, better-than-average sawbones, and source of questionable advice. A laid-back professional sort of pirate and doctor with a mercenary outlook on most things. She's one of the companions who can join the Unplanned Variable. 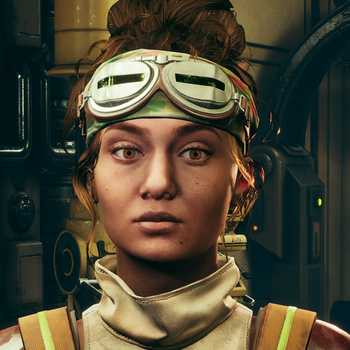 When I was in Edgewater, I dreamed of flying on a real ship. Working on a real engine. Belonging to a proper crew.
Voiced by: Ashly Burch

Edgewater's softhearted but brilliant young mechanic. Idealistic, kind, and better at her job than almost anyone else in the town, she doesn't fit into colony society, which puts the corporation first and the wellbeing of the town a distant second. She's typically the first companion to join the Unplanned Variable, as the only one who can accompany you during your initial stay in Emerald Vale. 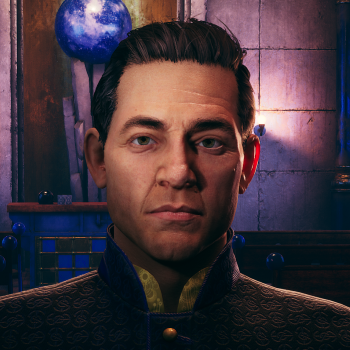 The innocent of heart are often blind to the guilt of others.
Voiced by: Dave B. Mitchell
"The Plan is not one rigid path, there are a variety of multitudes contained within it. Our Paths have variance, but we'll end up adhering to it whether we like it or not."

The good vicar in Edgewater following Scientism. He attempts to divine the secrets of his religion's notion of "The Plan", and needs your help to find (and then translate) a specific book that could help him do so. He is a potential companion who can join the Unplanned Variable. 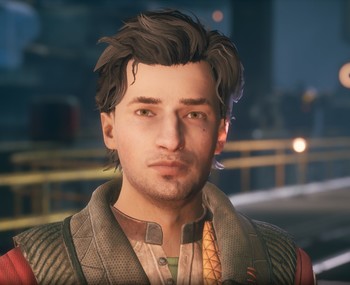 I have prepared a list of reasons why I believe you should hire me to join the crew of your ship and/or outlaw gang...
Voiced by: Jonathan Silver

A rebel without a cause (or a clue) who has a problem with authority and loves fighting against "the man." He's another potential companion who can join the Unplanned Variable. 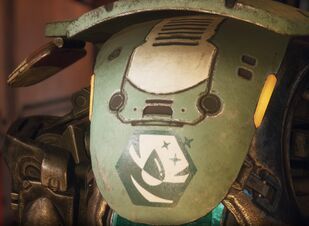 A specially modified Sanitation and Maintenance Automechanical. purchased by the original Captain Hawthorne who's been modified for combat. The Unplanned Variable needs to track down one of his missing parts before he's fully operational. 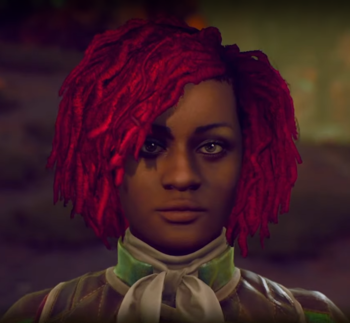 Now let's get to shooting before I get all sentimental.
Voiced by: Mara Junot
"The Board also believes it's impossible to live on Monarch, yet here I stand. They believe gainful employment necessary to one's survival. *I* believe the Board can kiss my ass."

A hard-drinking hunter and wilderness guide hired by the Unplanned Variable to escort them through the wilds of Monarch. She's usually the last person you recruit to the ship due to her placement in the game. 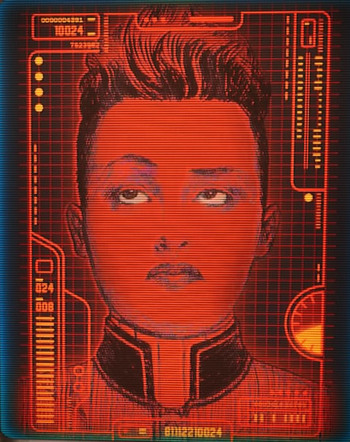 An advanced AI aboard the player's ship that controls the navigation and communications systems. While, theoretically, not sentient, she can learn from the people onboard the ship to better anticipate their needs. Or so she says.