Once the original colony ship that brought humans to the Halcyon system, The Groundbreaker is now an independent city-ship-state in orbit around Terra-2. They have a strict code of neutrality to keep corporation influence out and, as a result, the ship is home to some less than legal activity and organizations.

In General
"The whole colony's not much more than a diorama, showcasing one Board screw-up after another. That's why we got to keep them from gettin' their grubby mitts on Groundbreaker. She's our mess."

The men and women who police, maintain, and oversee The Groundbreaker.

Junlei Tennyson
"Fatalism has got no home on Groundbreaker. We aim to weather the storm, no matter how bad it gets."
Voiced by: Michell Rambharose

The mayor/chief engineer/captain of the Groundbreaker, Junlei is a descendant of the first captain - her grandmother. 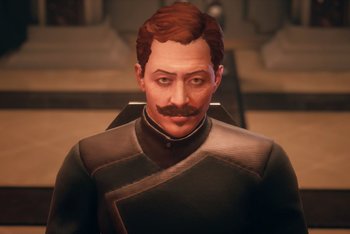 "Has something happened to my favorite scruffy freelancer?"
Voiced by: Noshir Dalal

A Halcyon bureaucrat working directly for the Board. 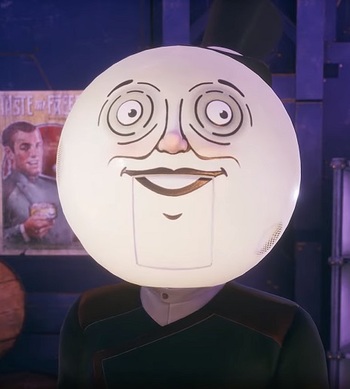 "At Spacer's Choice we care about your health and emotional well-being. That's why we put Martin through six years of vendor school only to make him wear this hat."

The heavily put-upon vendor of Spacer's Choice products for the station.

Gladys Culkelly
"Take that darling ship of yours down to Roseway — where that distress signal I told you about came from — and ferret out some tasty corporate secrets for old Gladys."
Voiced by: Stephanie Costa

The local fence. Unaffiliated with any of the other organizations, she acts as the center of the black market on the Groundbreaker and, arguably, the entire system.

The owner and operator of Rest-N-Go, the Groundbreaker's flophouse and home to some under-the-table dealings.

Vera Krivanek
"What don't I got?"

The bartender at The Lost Hope.

The owner and operator of Belle's Shells and a big believer in weapon modification.

Greasy
"User error in the maintenance of this unit's cutlery engaged several systems at once — the slicer, the grinder, the tenderizer."

The automechanical that vends foodstuffs from the Auntie Cleo brand.

Jessie Doyle
"Thanks for helping me with the Board. You're a real pal. Or I guess I should say Ellie is one, huh?"

A friend of Ellie's, she's been quarantined with a mysterious illness.