Characters / The Outer Worlds - Other Characters 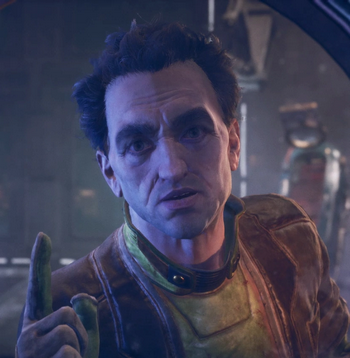 Rebel scientist
"Are you feeling anything that can be construed as... explosive cell death? No? Wonderful! Let's get started."
Voiced by: Pitor Michael

The rebel scientist who wakes you up on The Hope.

"He's to be your chauffeur, so to speak. Not to worry, I'm told he's a specialist. Dashing gunslinger, one of a kind ship, that sort of thing. You'll like him, I'm sure."

The original owner of the Unreliable. Crushed by your escape pod minutes into the game, leaving the player to recover his ship and repair it in his stead.

Corporate Compliance Crew
A team of mercenaries hired by Hiram Blythe to guard Devil's Peak. They are as bloodthirsty as they are anal retentive, and unlike most other mercenary groups, they follow a "corporate model" which allows their smalll organization to operate at peak efficiency. Unfortunately, their labored attempts at professionalism make them about as Lawful Stupid as actual corporate enforcers, and they will adhere to the Exact Words of a contract rather than the spirit of it, such as how they saw nothing wrong with guarding the Devil's Peak Cavern entrance, as that was what they were hired to do, while doing nothing to guard against intruders who take the long way up the mountain through the mantisaur-infested cliffs.
Hiram Blythe
Voiced by: Keston John

An information broker living on Monarch. Phineas needs to get in contact with him to locate more dimethyl sulfoxide.