This page is for tropes pertaining to the Red vs. Blue characters who are part of the Blood Gulch Crew. All spoilers for the first fifteen seasons will be unmarked below. 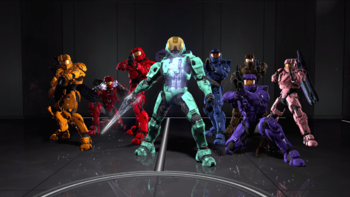 "You know, there's one thing you Freelancers always seem to forget. And that's the fact that we've managed to kick your ass time and time again. Oh sure, you've got all your smart plans, and your fancy technology, and your advanced training, but, in the end, what has that gotcha? Without a team you can count on and your fellow soldier by your side, all that doesn't really amount to squat, now does it?"
— Sarge

Commonly referred to as the Reds and Blues, the Blood Gulch Crew is a self-made faction consisting of the Red and Blue simulation trooper teams originally stationed in Blood Gulch, along with other individuals who joined them later on. Despite an intense rivalry and mutual dislike between the members of both groups initially, they have teamed up countless times to defeat enemies that would normally be out of their league. Because of their actions, many see the Blood Gulch Crew as some of the greatest soldiers and heroes in the galaxy, even though they self identify as "idiots."

For information on the Blood Gulch Reds, see the Red Team page.

For information on the Blood Gulch Blues, see the Blue Team page.

The members of the group who are neither Red nor Blue.
Carolina 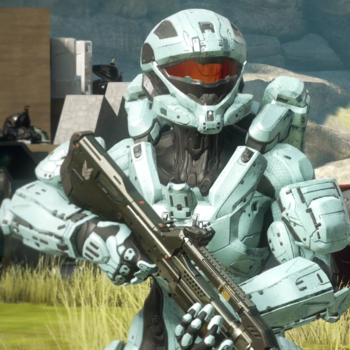 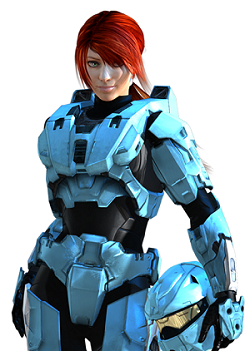 "You know, I never thought I'd be so glad to see you idiots again."
Voiced By: Jen Brown

A member of Project Freelancer and Allison and the Director's daughter. She's mentioned by name a few times during the earlier seasons, and first appears in person in Season 9. According to the ranking board, she's the best Freelancer at the time the series starts. She's often placed in command of the other Freelancers on missions, or used to bail out her less experienced compatriots. She has a coldly professional dynamic between her and the other members, but seems to treat Agent York as an equal and even speaks to him with some twinges of affection.

After Agent Texas arrives in Project Freelancer and usurps Carolina's position as the top Freelancer, Carolina begins to feel jealous. Her competitive nature leads her to train more and eventually get two A.I. implanted into her, hoping that she would be able to beat Tex. But not only is she still unable to beat her, her jealousy along with the A.I. in her head causes her to snap, leading to her becoming the Meta's first victim.

She and Epsilon leave the Crew to investigate the Space Pirates on Chorus, returning when the Crew gets involved in their plans. Carolina is stabbed in the leg by Felix, thus hampering her fighting ability. After a few losses, Carolina begins to lose her confidence and starts gathering armor enhancements. 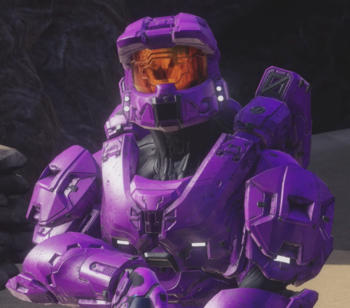 In Season 2, in response to increased injuries and deaths at Blood Gulch, purple-armored medic DuFresne is sent to the backwater outpost to aid both teams. Doc, who earns his nickname after Church declares DuFresne too hard to pronounce, hardly deserves his title. He attended (but did not pass) medical school at Jamaica State, doesn't know how his healing doodad works, got his unique rank by sending Command a letter every day for four years asking for it, and treats Caboose's foot injury by rubbing his neck with aloe vera. Doc's pacifism, political correctness, and incompetence quickly make him unwelcome in either base, leaving him to wander the gulch, forgotten... until Caboose's "exorcism" leaves the AI O'Malley without a host. The Omega is able to possess him completely, leaving Doc a passenger within his own skull, only able to talk or shout apologies for O'Malley's actions. O'Malley eventually comes to regret choosing Doc as a host, as the two end up having Gollum/Sméagol style arguments over whether or not to kill people, if their nefarious secret lair needs an answering machine, etc. When Doc is called back to Blood Gulch to deal with Tucker's "illness," O'Malley jumps ship, freeing Doc once and for all.

His whereabouts during Reconstruction are unknown, though when Washington asks the Reds if they know a medic, they violently answer in the negative. In the extended version, they do call him, but forget (or didn't care enough) to tell him they didn't need him anymore. He arrives to find no one there, and says to no one in particular: "You guys suck."

In Revelation, he is called to Valhalla by Simmons, who was coerced into calling him by Wash and the Meta. He becomes a hostage of Washington, but due to the Stockholm Syndrome, they develop a bit of a rapport. He denies this strongly, however. Doc stays behind at the farm in Valhalla with Donut.

When notified that the Reds and Blues are stuck on Chorus, Doc flies there with Donut and Lopez. He begins assisting the Red team before he is hit by one of Grif's teleportation cubes, and doesn't reappear when the cube is thrown again. Excluding Lopez, nobody seems to notice his disappearance. He is later found hiding out in one of the caves on Chorus after getting sent to an alternate dimension. 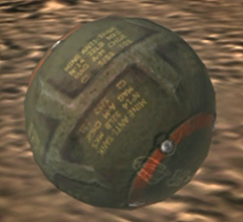 "Hey. You can't make an omelet without blowing up a few eggs."
Voiced By: Nathan Zellner

Andy is a bomb (the same bomb used in Halo multiplayer) built by Tex from parts from a protocol unit and "some other personal items" (according to him) to blow up and kill O'Malley. Due to O'Malley's base locking down after his placement inside, he's about to blow up most of the Blood Gulch crew, but Church asks Gary/Gamma to deactivate it, saving their lives. It's then revealed that the bomb can talk and is named Andy. Andy has a short fuse (literally and figuratively), likes to insult people, and finds humor in the misfortunes of others. He also likes to blow stuff up, though when Tex threatens to detonate him, he reacts with fear (though it may be because he wouldn't do much damage if detonated at that particular time.)

Originally Andy is very heavy and only Caboose can carry him. However in later episodes, when O'Malley refers to him as a bowling ball, Andy asks Caboose if he is fat, and then states that he has been working out. Sarge confirms this since he (and several others) can carry Andy with ease.

Andy gains a new role when it is revealed that he is the only one who can understand the alien language. Later, Sarge kidnaps Andy and has him translate the orders from Vic stored in Lopez (which could only be played back in Spanish). Andy is seen with Tex onboard the Pelican as she leaves at the end of The Blood Gulch Chronicles, exploding and killing O'Malley and Tex, and producing only a white flash.

Although he exploded, he later appears in the sponsors-only ending of a Season 6 episode expressing his disappointment about how small his explosion was. An Epsilon-version of him appears near the end of Season 9 as a bomb built by Tex and "retrieved" by Grif as a part of Sarge's "Fighting the Planet" plan. In Season 11, Tucker accidentally calls him via the Blue Base's built-in Siri, and we hear his voicemail message. 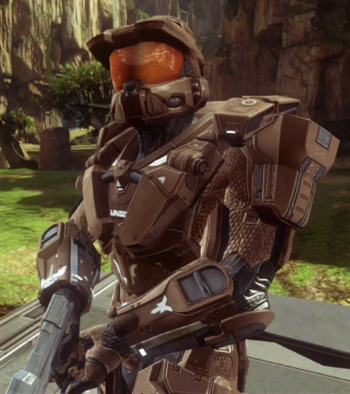 In Season 11, Sarge builds a new robot that coincidentally also speaks Spanish, whom Sarge dubs Lopez Dos.0. However Lopez Dos.0 is much nicer and more naive than the original Lopez, leaving the Reds to think he is stupider. He eventually crosses his Despair Event Horizon when he realizes that all of his commanders are utterly insane, and, stealing the body of the Reds' broken Mantis droid, C.C., begins a rampage to kill anyone in his path. He meets his end in the second-to-last episode of Season 11, thanks to Donut.

Allies
There are many characters that, while not official members of the Blood Gulch Crew, have worked together with them temporarily. This is a list of those characters, along with links to the pages where their information is located.