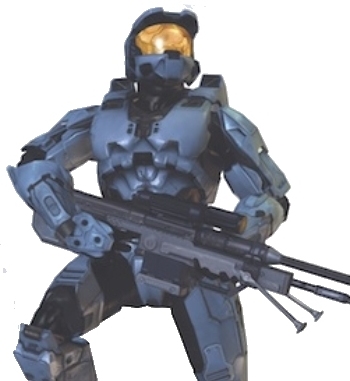 "I just want you guys to know, out for everyone I've ever met, I hate you all the least."
"There's a very fine line between not listening and not caring. I like to think I walk that line every day of my life."
Voiced By: Burnie Burns, Ashley Jenkins ("Get Bent")

The closest the series has to a proper protagonist in the first several seasons — the Only Sane Man, a Deadpan Snarker, and world champion Jerkass, though he does have moments of kindness. A neurotic and almost perpetually angry individual who barely gets along with his teammates, Church is the defacto leader of the Blue Team since their commanding officer, Captain Flowers, died of a heart attack (or an aspirin overdose; it's kind of ambiguous).

Church is killed in a friendly fire incident very early in the series, but quickly returns as a ghost, and later possesses a robotic body. Despite wielding a sniper rifle and acting as the team's designated marksman, he is an awful shot, often emptying an entire clip without hitting anything (in one incident, from two feet away from his target). He wears light blue/cobalt armor, though in "ghost" form his armor is white (and transparent).

Reconstruction offers some surprising character development that explains Church's ability to survive death and possess people: he is actually the remains of the Alpha AI based on the mind of Project Freelancer's Director. Church vehemently insists he's a ghost, not an AI, but is nonetheless willing to work with Agent Washington to fight the Meta, culminating in his erasure by an "emp" at the end of the season.

In Recreation and Revelation, Church is "resurrected" in the form of Epsilon. At first a mere shell of his former self, he slowly begins to reassemble his personality (with the help of Caboose, the other Reds and Blues, the Freelancer Offsite Storage Facility's database, and other digital records), as he tries to reunite with Tex. In the process, he mellows out considerably before trapping himself inside a broken Memory Unit to reunite with and save Tex, whom the Meta had previously trapped inside. Inside, he begins to relive the Alpha's memories of Blood Gulch, reconciling with his past, and realizing that despite the low points, his life was pretty good.

Throughout Season 9, he relives his memories of the Red vs. Blue war through a simulation inside the Memory Unit, eventually reuniting with Epsilon-Tex and reconciling his relationship with her. However, the Memory Unit begins to fail, as the world experiences quakes and he succeeds in resolving his issues with Tex by finally letting go of her memory and deleting her from the simulation. He resigns himself to death, only to discover that the Unit wasn't failing, but was being broken open by the Reds and Blues (now with Agent Carolina) as an attempted rescue mission.

In Season 10, Church, begrudgingly goes along with Carolina to find the Director, but they both unexpectedly warm up to each other, (much to the chagrin of the others). Church eventually remembers the full story of what he went through as Alpha and how he was created as Epsilon, but after having an outburst when the other Reds and Blues refuse to help, (at first) and what he saw the Director become from similar obsessions with the past, both he and Carolina finally decide that it wasn't worth it. After the Blood Gulch Crew crash on Chorus, Church and Carolina leave to investigate without saying a word.

Church and Carolina would later return in the second act of The Chorus Trilogy to save the Blood Gulch Crew from the Space Pirates, tell them what was really going on, and work together to save Chorus... as well as bickering with Tucker, who is initially pretty upset about what he did. In the final part of The Chorus Trilogy, Church eventually begins to wear down due to being both overtaxed by Carolina and him ultimately realizing just how old of an A.I. fragment he actually is. Inspired by Doyle's sacrifice, he erases his memories to give the others a fighting chance in their Last Stand against Charon Industries.

It remains to be seen whether this is truly the end of Private Church, but even if it is, his impact on the series is undeniable.

For information on the man he was based on, see Leonard Church's entry on the Project Freelancer page.

Associated Tropes For Church in General:

"You should hate someone because they're an asshole, or a pervert, or snob, or they're lazy, or arrogant or an idiot or know-it-all. Those are reasons to dislike somebody. You don't hate a person because someone told you to. You have to learn to despise people on a personal level. Not because they're Red, or because they're Blue, but because you know them, and you see them every single day, and you can't stand them because they're a complete and total fucking douchebag."

The original Artificial Intelligence acquired by Project Freelancer. Since they needed more, they subjected it to enough stress and mental torture to cause it to fracture, and harvested the fragments as partners for their special agents. What remained of the original was sequestered away at a backwater outpost, where it convinced itself that it was human based on the memory fragments remaining from the human intelligence it was based off of. In another major twist, Reconstruction's epilogue revealed not only was Church the Alpha, but the Alpha itself was based off the mind of Doctor Leonard Church, the Director of Project Freelancer himself.

The whole and complete Alpha himself shows up in Season 9. He's more or less exactly as flippant and cocky as Church, with the addition of being an utter genius and is slightly more civil to others. Season 10, on the other hand, shows his Cold-Blooded Torture and its aftermath.

Tropes relating to The Alpha/Alpha-Church 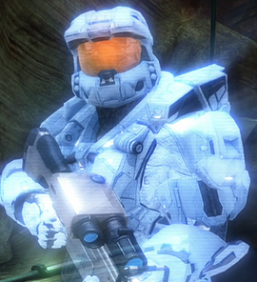 "I am not a thing! My name is Leonard Church, and YOU WILL FEAR MY LASERFACE!"

A Freelancer Smart A.I. formed out of the Alpha's memory centers. It was originally meant to be Agent Washington's A.I.s, but it had a mental breakdown inside his head, and was instead placed into storage. At the end of Reconstruction, it is the only Freelancer A.I. to survive the "emp" due to Caboose rescuing it and taking it back to his home base.

Throughout Recreation, Caboose eventually inserts Epsilon's consciousness into a new host (a Forerunner Monitor), and it assumes the identity of Leonard Church. It has also been shown to house the memories of the other A.I.s in it, and has used them to communicate to Caboose in the past. Epsilon spends Season 9 inside the Memory Unit, searching for Tex before he decides to "forget" her once and for all. When he is rescued from the Unit, he unwillingly teams up with Carolina to take down the Director. While at first the two don't get along, they bond over the course of Season 10, and eventually leave the Reds and Blues behind on Chorus to hunt down some space pirates Carolina caught wind of.

Upon learning of Control's malicious intent and the "third party" in the Chorus Civil War, the two infiltrate the Space Pirates' ranks to regroup with the Reds and Blues in Season 12. At first, Tucker is enraged at Epsilon for leaving them behind, but the two apologize and forgive each other by the end of the season. Throughout Season 13, Epsilon is noticeably growing weaker, and is unable to do anything to help Carolina in Episode 11. Onboard the Staff of Charon in the Season 13 finale, Epsilon sacrifices himself to allow Tucker to operate Maine's armor and have a fighting chance against Charon's last stand.