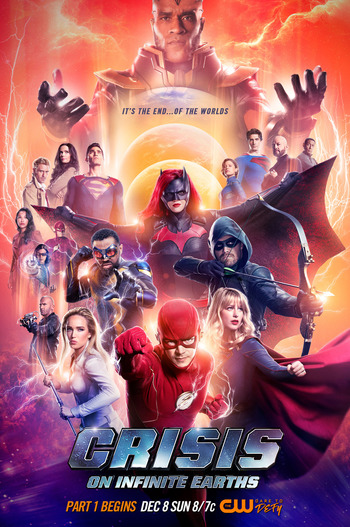 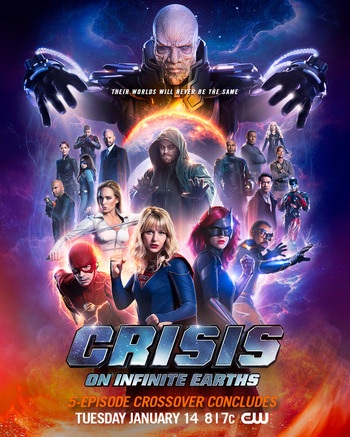 "I know we can beat this together."
"In the beginning, there was only one...a single black infinitude. Then the infinitude found release, and finally, the darkness broke, filling it with life. With The Multiverse. Every existence multiplied by possibility and spread out before space and time in infinite measure. Civilizations rose and fell, and rose again to cross realities grasping expanse. Life, a precious gift persevering in the face of every obstacle, until finally, the age of heroes was born. Chaos, the constant enemy of life, kept at bay by champions from across the Multiverse. Joining forces to fight on behalf of all creation, they found each other just in time. Because now, the entire Multiverse is about to come under attack. There is a malevolent force at work, one driven by a singular goal: the destruction of all there is. I have planned. There are those who say I have schemed. But the time for preparation has passed. The Crisis is now upon us all."
— The Monitor
Advertisement:

Crisis on Infinite Earths is the sixth annual crossover of the Arrowverse, based on the limited comic book series of the same name. Based on the sheer scale, Crisis was the biggest crossover the Arrowverse has done to this point.

Ten millennia ago, on the planet Maltus, a scientist named Mar Novu, known to us as the Monitor, attempted to Time Travel to the beginning of the universe. Unfortunately, that experiment set off a chain reaction of events that began to threaten the very universe Novu wanted to see. To atone for his hubris, he began a campaign of deception, devastation, and death, in an attempt to summon heroes who would have the courage to fight a threat so big, it would envelop not only his world but untold millions beside it...

Ever since the modern version of The Flash premiered, there have been established truths, events that are immutable, unchangeable. For nearly five years, one of them was the April 25, 2024 disappearance of Barry Allen, the Fastest Man Alive, in what was termed a "red-sky crisis". However, thanks to various degrees of time travel manipulations, his destiny is approaching sooner than he thinks, and this is one he can't run away from...

For seven years, Oliver Queen, the Green Arrow, has given nearly all of himself to save his beloved Star City from the evils that plagued it. However, due to a Deal with the Devil made at the end of the previous crossover, Oliver now finds himself on a journey towards his own destiny...one he knows will cost him his life.

After years of signs and warnings, the Crisis has finally come for the multiverse. As entire universes are obliterated by an antimatter wave, it's up to the many heroes (and in some cases, villains) of the extended Arrowverse to salvage what they can of these infinite Earths before it's too late.

As with previous Arrowverse crossovers, Crisis unfolds through episodes of its various series: Supergirl, Batwoman, The Flash, Arrow, and Legends of Tomorrow cover the main story, while an episode of Black Lightningnote "The Book of Resistance: Chapter Four: Earth Crisis" directly ties-in with the events of Crisis, officially bringing it into the broader Arrowverse. Unlike prior crossovers, however, there was a month-long break between the third and fourth installments. There was also a two-issue Crisis on Infinite Earths Giant comic book sidequel covering events that happen off-screen during the action.

In adapting Crisis for television, it was decided to also make the event one giant love letter to the DC Universe, and acknowledge some of the shows that led us here. So in addition to the Arrowverse itself, Crisis also incorporates the following series into the Arrowverse proper:

In addition, Stargirl made an Early-Bird Cameo, establishing her universe as a revamped Earth-2. And in a surprise, Ezra Miller also made a cameo as another alternate Barry Allen, wearing the costume he wears in the DC Extended Universe, though his cameo takes place in the speed force whilst all of the multiverse has been destroyed and he fades away, leaving an ambiguity. However, the upcoming Flash movie has been announced to follow up on the cameo, and feature Barry traveling to Earth-89.

Following Crisis, Arrow wrapped up its eight-season run with the Backdoor Pilot of its planned spinoff Green Arrow and the Canaries, followed by a series epilogue, while Legends of Tomorrow premiered its fifth season. It was also announced that a new show, Superman & Lois, following the versions of those characters from Supergirl, was picked up to series for the following season. After some delays, it premiered on February 23rd, 2021.

"In the end, there was only one...a single black infinitude. Then the infinitude found release, and finally, the darkness broke, filling it with life. With the Multiverse. Every existence multiplied by possibility and spread out before space and time in infinite measure. Civilizations rose and fell, and rose again to cross realities grasping expanse. Life, a precious gift persevering in the face of every obstacle, until finally, the age of heroes was born."
Feedback