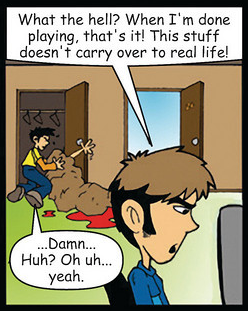 "He's been playing those video games an awful lot. Makes him a very good shooter. Holding that controller's like holding a gun, they say in the news! You gotta help me, I fear for my life!"
— Female claimant, Max Payne 2: The Fall of Max Payne
Advertisement:

Not only is it there the perception that New Media Are Evil, but some works attract criticism because of loose association with some contemporary murder or suicide. The title comes from since-disbarred attorney Jack Thompson'snote Not to be confused with the Australian actor of the same name accusation that games like Grand Theft Auto and Manhunt turn players evil.

Moral Guardians' attempts to blame the New Media often neglect to note that it's only our misty watercolor memories that make it seem like murder sprees and school shootings only started happening after the release of Doom. In fact, prior to the 2007 Virginia Tech Massacre, the deadliest school shooting in US history was the University of Texas at Austin massacre in 1966 (and a school bombing in 1927 was deadlier than either). Also, the rate of violent crime has gone down since the widespread adoption of video games in the '90s, for reasons that are complex and poorly understood but most likely have more to do with social conditions than with video games. While correlation does not prove causation, lack of correlation certainly disproves causation.

Sometimes, the works are blamed before any evidence whatsoever of any connection has emerged, and then activists try to sweep the exculpatory evidence under the rug when defenders demonstrate that the criminals didn't even actually use a copy of the work in question. Also, various politicians, media, and clergy will sometimes blame any (currently) popular game for violent events, or blame any game that has any connection (however slight and tenuous) to the crime in question (e.g. blaming a JRPG like Final Fantasy VII for a shooting).

There is some basis for this claim in reality, to be sure: people who play violent video games for a long period of time can be desensitized to violence, which theoretically could make them more likely to commit violent crimes. However, firstly, this effect is only likely to happen with those who are already contemplating acts of violence, and second, any violent media, including coverage of real life violence, has this potential. To blame only one kind of media is a cheap way to escape responsibility for spotting early warning signs of a young person's mental state that might lead to violence, and their moral education in the consequences of acts of violence against others. On the other hand, it's easy.

Some real-life criminals, naturally, have exploited this trope to blame their crime on a fictional work in the hope to get a "free of charge" claim in court or at the very least a lesser punishment than they would normally receive for the crime they committed.

However, the more widespread acceptance of video games as a medium thanks to those who grew up as video games were becoming a major industry now having children of their own, combined with some games like Hatred embracing the idea of senseless violence and bombing, as well as video games being protected as free speech in the United States (as confirmed in a 2011 ruling by the Supreme Court), has all but rendered this trope discredited. Nowadays, mentioning that someone played violent games in courtroom proceedings is guaranteed to get smacked down by a judge for being prejudicial.

See also: Ultra Super Death Gore Fest Chainsawer 3000; Video Game Cruelty Potential; Hitler Ate Sugar; The Comics Code. Often overlaps with Cowboy BeBop at His Computer. Moral Guardians are normally the invoker of this trope. And Some Other Stuff is a way of attempting to avoid this.