Literature / The Tough Guide to Fantasyland 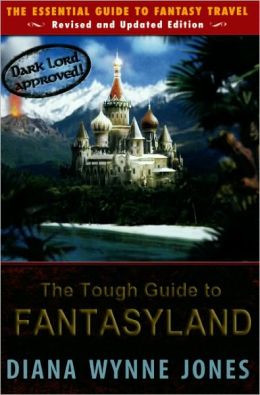 This piece of Meta Fiction by Diana Wynne Jones pretends that pretty much all of the fantasy stories ever told — well, most modern genre fantasies, anyway — took place in a place called "Fantasyland", and that the creators of the stories are the "Management" who arrange for the audience to go on "tours". With this setup, an extensive list of fantasy tropes is presented, as if to a tourist visiting another country, and thoroughly deconstructed. It also pretends that the stories are statistically representative of "Fantasyland", and thus concludes that the most common type of meal is stew, that cities are composed mainly of alleyways, and that the ecology and economy of Fantasyland are severely screwed up.
Advertisement:

Jones later wrote a novel called Dark Lord of Derkholm set in the Fantasyland described in the Tough Guide and deconstructed it further by revealing it's really nothing like the guidebook at all and it's all put on (very reluctantly) for the benefit of the tourists.

Published originally in 1996, Jones issued an Updated Re-release in 2006 with some new examples (the page image comes from that edition).

Tropes in this book.

(Note: As the whole point of the book is to list and deconstruct as many fantasy tropes as the author could identify, it's a fair bet that any fantasy-related trope known to this wiki gets some kind of coverage. But the following tropes are definitely among those included — and, pretty much to a one, subverted and lampshaded.)