Characters who have appeared in several films of the James Bond franchise. 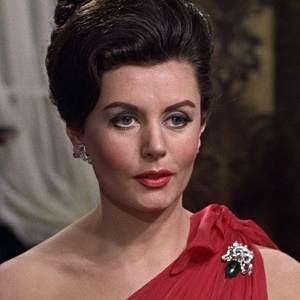 Appearances: Dr. No | From Russia with Love

Strictly speaking, she is the very first Bond Girl moviewise, although not the main one. Trench first appears in Dr. No, where she first meets Bond during a game of Baccarat at the London club Le Cercle. She reappears briefly in From Russia With Love for some "unfinished business" with Bond, making her the first Bond Girl to appear more than once in the series. 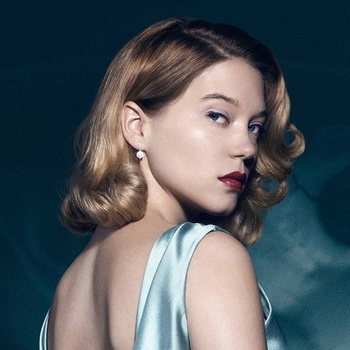 "Is this really what you want? Living in the shadows? Hunting, being hunted? Always alone?"
Click here to see her as a child 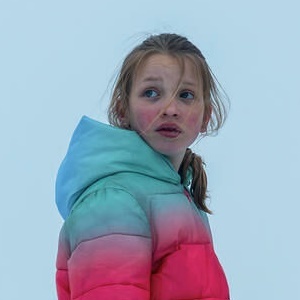 Played by: Léa Seydoux (adult), Coline Defaud (as a child)

Appearances: Spectre | No Time to Die

A young psychiatrist, she is the daughter of Mr. White, who committed suicide after Oberhauser had him poisoned for treason. Bond swore in front of White to give her protection and eventually fell in love with her.

After the events of Spectre, she returns in the next film. This makes her only the second Bond girl to appear in more than one movie, and the first main Bond girl to do so as well (Sylvia Trench was a secondary Bond Girl and was Demoted to Extra in From Russia with Love. Maud Adams also appeared twice, but as separate characters.) 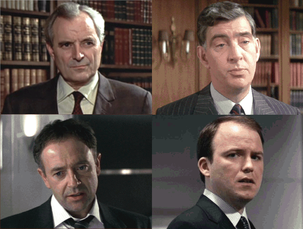 Appearances: The Man with the Golden Gun | For Your Eyes Only | GoldenEye | The World Is Not Enough | Quantum of Solace | Skyfall | Spectre | No Time to Die 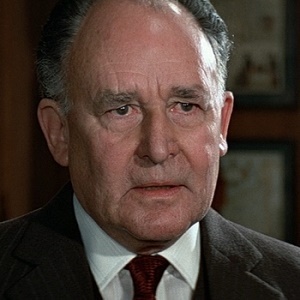 "I'm afraid we have to inform the Prime Minister that Operation Undertow is dead in the water... She'll have our guts for garters!"

Appearances: The Spy Who Loved Me | Moonraker | For Your Eyes Only | Octopussy | A View to a Kill | The Living Daylights 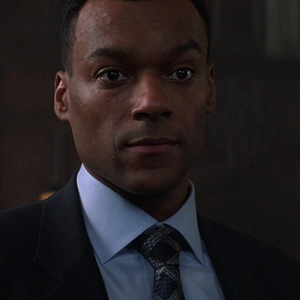 "White Knight, 4 minutes to impact! Get out of there!"

Appearances: Tomorrow Never Dies | The World Is Not Enough | Die Another Day

An MI6 aide who assists M in briefing Bond about and giving vital information prior to his missions. 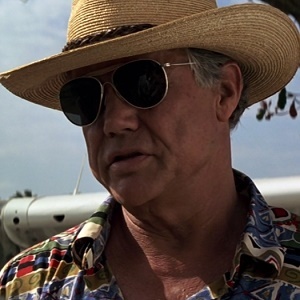 "We have no interest in seeing World War III— unless we start it."

A veteran CIA agent who calls Bond "Jimbo." He first appears in GoldenEye, working the same case that Bond is and being his initial contact in Russia. He reappears in Tomorrow Never Dies, welcoming Bond after Bond successfully retrieved a GPS encoder from Elliot Carver's office. He is last seen looking at Bond leaving to look at the wreck of the British frigate HMS Devonshire not leaving "without saying goodbye." 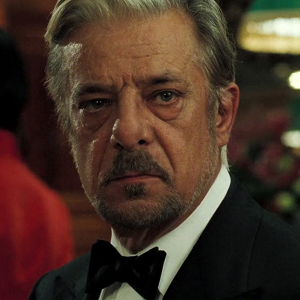 "Being dead does not mean one cannot be helpful."

"When one is young, it seems so very easy to distinguish between right and wrong. But as one gets older, it becomes more difficult. The villains and the heroes get all mixed up."

An MI6 field agent who appears in Casino Royale as Bond's ally inside the Casino Royale. At the end of the film, Bond has Mathis arrested because Le Chiffre claimed Mathis was a Double Agent. He reappears in Quantum of Solace, where this is revealed to have been false and has been cleared by MI6 for his involvement with Le Chiffre, and as compensation MI6 gave him his retirement and bought him a villa on Lake Como. Bond, by then a fugitive, returns to him and convinces him to help him track down Quantum member and businessman Dominic Greene in Bolivia. 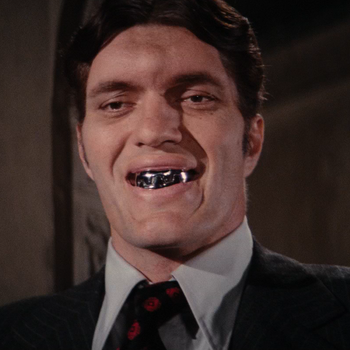 Appearances: The Spy Who Loved Me | Moonraker

Holly Goodhead: Do you know him?
James Bond: Not socially. His name's Jaws. He kills people.
— Moonraker

A henchman distinctive for his metal teeth, huge stature and his persistence in surviving everything that gets thrown at him (or falls on him) who first appears in The Spy Who Loved Me working for Karl Stromberg. As such, fans look on him as the one Dragon Bond has genuinely feared.

After surviving the destruction of the Atlantis (Stromberg's base), Jaws reappears in Moonraker, hired by Hugo Drax as a replacement for his enforcer Chang after he is disposed of. 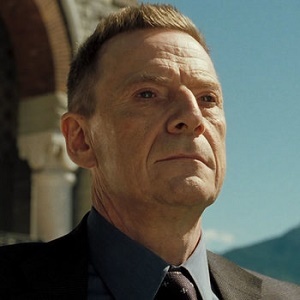 "The first thing you should know about us is that we have people everywhere."

A high-ranking member of the secret organization known as Quantum. He was in charge of Le Chiffre's financial operations in Casino Royale before killing Le Chiffre as the latter became a liability. Bond captures him at the end of Casino Royale and attempts to bring him to justice in Quantum of Solace, only for him to escape. By the time we see him again in Spectre, he's grown to resent the bigger organization he belonged to, Spectre. 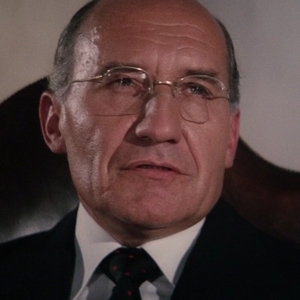 "The order of Lenin, for Comrade Bond. The first ever non-Soviet citizen to receive this award."

Appearances: The Spy Who Loved Me | Moonraker | For Your Eyes Only | Octopussy | A View to a Kill | The Living Daylights

The head of the KGB from The Spy Who Loved Me (1977) to A View to a Kill (1985). In his final appearance in The Living Daylights (1987), he has become a post-Glasnost envoy in the Foreign Service and is succeeded by General Pushkin. Gogol sometimes allies himself with MI6 to stave off the possibility of open war with the West. Only in For Your Eyes Only does he act as an enemy, but even then, his actions are more those of a competitor. 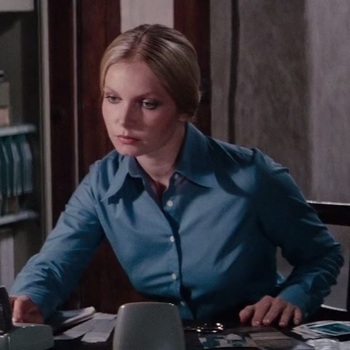 Appearances: The Spy Who Loved Me | For Your Eyes Only | Octopussy

The personal secretary (and strongly implied mistress) of the head of KGB, General Gogol. 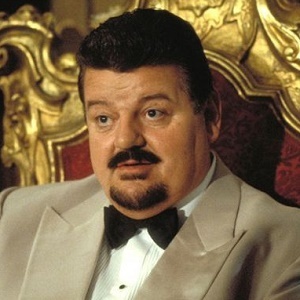 "Get me out of here and I'll show you what a bumped head feels like!"

Appearances: GoldenEye | The World Is Not Enough

A former KGB operator turned Russian gangster and arms dealer after the fall of the USSR. He likes to live large, surrounded by women. Zukovsky left the KGB and by the time he first appears in GoldenEye he finances his lifestyle through various criminal endeavors with the Russian mafia. Bond has to go to him for info about Janus, which is complicated by the history he has with Zukovsky — the reason he has the limp in his right leg is because Bond shot him in the knee, and Bond also stole his car and his woman, giving Zukovsky plenty of reason to be pissed off.

He appears once again in The World Is Not Enough, where he has made a fortune in caviar, holding court in a luxurious casino in Baku, rather than the dingy St. Petersburg nightclub from GoldenEye. He made a secret deal with Elektra King in order to get a nuclear submarine captained by his cousin, Nikolai. 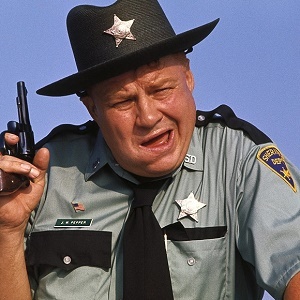 "You picked the wrong parish to haul ass through, boy! Nobody cuts and runs on Sheriff J.W. PEPPER! And it's him who's speakin', by the by!"

Appearances: Live and Let Die | The Man with the Golden Gun

"By the powers invested in me by this parish, I hereby do commandeer this vehicle and all those persons within!"

A hapless, uncouth Louisiana sheriff who first appears in Live and Let Die, where he ends up getting tangled in a high speed chase between Bond and the villain Kananga's henchmen. He reappears in The Man with the Golden Gun, where he took a vacation to Thailand with his wife, and once again ends up in another chase involving Bond.