Just Think of the Potential
aka: Potential Applications 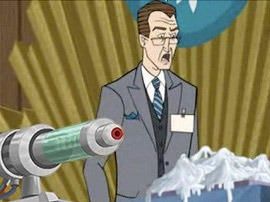 As you can see, Doctor Venture's "Ooo-Ray" has only peaceful applications.
"Forgive me Mister President! But I am a man of science, not of war! I intended the Giant Death Ray to be used for good, not evil!"
— Professor Death, That Mitchell and Webb Look

Just Think of the Potential is a trope often used to justify the existence of a dangerous situation and/or provide motivation for a disinterested antagonist, such as a corporation.

A character or characters with vision, sometimes representing a large organization, encounters a new, esoteric technology, and suddenly realizes all the Potential Applications it could be put to. The technology can come in any form—maybe a Mad Scientist just constructed a group of Ridiculously Human Robots, maybe astronauts have brought back a Black Box filled with Imported Alien Phlebotinum, maybe genetics researchers have dreams of Mainlining the Monster they've just spliced up in a lab, or maybe biologists from an Animal Wrongs Group have just discovered Killer Rabbits in the Amazon.

Sometimes happens before the story starts and is implied. Generally then results in one of two plot developments, occasionally both:

At least one of the subtropes is always present, and often more. If the bad guys are an organization, they always believe in either the Military Potential or the Commercial Applications; if they are a lone Mad Scientist, they can be misled into thinking there are better uses. The good guys almost always believe in the Peaceful Applications or that the technology shouldn't be used at all. The bad guys will more than likely fail to see legitimate uses for monetary potential. The interplay between the subtropes is therefore often used to illustrate An Aesop.

Ultimately, the Potential Applications are rarely realized during the story, and very often turn out to have been a phantom. Even if the technology really could have been used peacefully, it will usually be destroyed by the heroes to prevent it from falling into the wrong hands — ensuring that even when he isn't, Reed Richards Is Still Useless. Now, if the people involved in the research don't care about the potential applications, it's because they do it For Science!! Just don't think of the other potential applications. This is why the Disposable Superhero Maker is disposable in the first place.

Truth in Television, in Real Life, many dangerous things do indeed have beneficial applications that often see widespread use. It helps that making a doomsday device out of one is nowhere near as simple as it is in fiction, and that getting an army of loyal subjects to support your agenda of destroying the world they live on with it is even more ridiculously difficult.