Glad I Thought of It 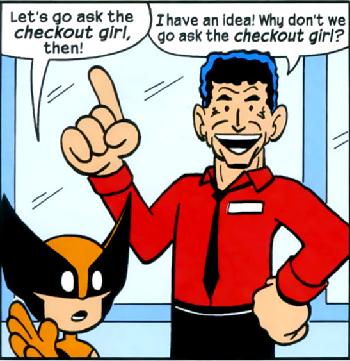 Bob and Alice have a problem. Bob has a brilliant solution and tells Alice. Alice reacts as if she had thought of it herself.

Bonus points if Alice first criticizes the idea before stealing it. Further bonus points if Bob and Alice are members of a Quirky Miniboss Squad and Alice returns ownership of the idea to Bob after the plan goes Wahoonie-shaped.

A common variation has Alice acting as though she has not heard Bob's suggestion at all, and then repeating it word-for-word as though she had just thought of it. This variation is important: without it, the character who's "glad they thought of it" technically isn't lying - they did think of it, as a consequence of someone else's voicing the idea; what they're lacking is the acknowledgement "... because you said it", and that lack is the essence of the trope. If Alice honestly hadn't heard the plan before independently suggesting it, it's a case of Strange Minds Think Alike.

To add insult to injury, any other participants to the plan will often be quick to bestow fawning praise on Alice for "her" brilliant idea... even if they had also been present to hear Bob suggest it.

Compare with Glad You Thought of It, which is to suggest subtly an idea in a way that lets someone else take credit (and perhaps honestly believe that they thought of it themselves), making them more likely to accept and act on the proposal than if you directly advocated it yourself.

People prone to this are also prone to Never My Fault.